We've seen the pilots of CBS's new shows, and while they're not for review (things often change drastically before the shows are set to premiere), we do want to share our first reactions to what's coming in the fall and midseason.

This quick guide is designed to get you excited for some new shows ... and to warn you to curb your enthusiasm for others. Just keep in mind that we'll have full reviews of the final pilots closer to airdate. For now, here are our snap judgments of CBS's new shows for the 2013-2014 TV season.

There are six new scripted shows coming to CBS that were ready to preview, and they all proved one thing: We can't agree on anything except for the fact that "We Are Men" is terrible. HuffPost TV staffers Maureen Ryan, Maggie Furlong, Jaimie Etkin, Chris Harnick, Alex Moaba, Laura Prudom and Leigh Weingus had plenty of varying opinions. 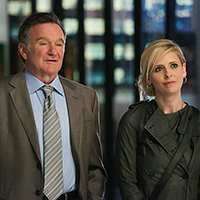 "THE CRAZY ONES" Read more about "The Crazy Ones" and watch a preview here Ryan: Skip It I don't think the sitcom that can contain Robin Williams has been invented yet, despite the steadying influence of Buffy (Sarah Michelle Gellar). A little too manic for my tastes.

Furlong: DVR It James Wolk is a comedic revelation. Not to me because I've been singing the guy's praises forever, but he's perfection here. Bonus: This is the least obnoxious Robin Williams has been in a very long time.

Etkin: DVR It It's Robin Williams doing voices, talking quickly and being awkward, but brilliant and Sarah Michelle Gellar being the stick-up-her-ass workaholic. Nothing new here -- except for the fact that Williams' Simon is calling his daughter (Gellar) "baby" far too often for my comfort level. But it still had enough solid moments that made me chuckle, like James Wolk as an adorable playboy singing with Kelly Clarkson.

Harnick: Watch It The combo of James Wolk, Robin Williams and Sarah Michelle Gellar works. There's something for everyone in that trio. Plus, watching Kelly Clarkson try not to laugh at Wolk and Williams is worth your time.

Prudom: Watch It James Wolk is charming enough to make this a must-watch all on his lonesome, but a fun cameo by Kelly Clarkson, a ridiculously catchy musical number and the sweetly odd combo of Robin Williams and Sarah Michelle Gellar made this my favorite new comedy offering on any network.

Weingus: DVR It A comedy starring Sarah Michelle Gellar and Robin Williams sounds like a recipe for success, and to its credit, the pilot is fast-paced and fun. But Williams and Gellar's odd father-daughter relationship combined with over-the-top storylines may be too overwhelming to watch on a weekly basis. 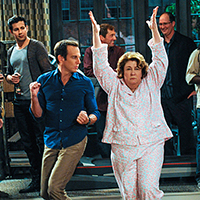 "THE MILLERS" Read more about "The Millers" and watch a preview here Furlong: Skip It Will Arnett, Margo Martindale, Mary Elizabeth Ellis, JB Smoove, Beau Bridges -- all wasted here. Michael Rappaport I expect this kind of crap from, but the rest of you should be ashamed. Also, the pronunciation of "quinoa" is not that funny.

Etkin: Skip It Margo Martindale has an Emmy and, here, she's engaging in a running fart gag, ice cream cliches and a "Dirty Dancing" routine with Will Arnett. Though this show makes me infinitely uncomfortable -- and sad for its cast -- I have no doubt it'll be a hit.

Moaba: DVR it Fart jokes by the dozens, a multi-generational divorce storyline and a talented cast. It’s not particularly good, but it has all the ingredients to be massive hit for CBS.

Harnick: Skip It Margo Martindale proves she has comedic chops after spending many seasons on many different shows being evil and killing people, but this show is not my brand of humor.

Prudom: Skip It A waste of a phenomenal cast, replete with clumsy jokes about farts and throwing up that will likely appeal to the "Two and a Half Men" crowd, but not me. Why did Margo Martindale forsake "The Americans" for this? 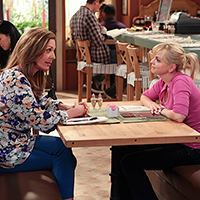 "MOM" Read more about "Mom" and watch a preview here Furlong: Skip It Anna Faris tries her best with the material, but at the end of the day, it's a Chuck Lorre laughtrack-filled sitcom, and I've seen enough of that. Of course, it'll be on for several seasons no matter what I say, so ...

Etkin: DVR It There's an adorable child (Blake Garrett Rosenthal), Allison Janney as an almost-recovering alcoholic, the return of French Stewart and there's just something about Anna Farris. I liked this far more than I thought I would, but I wouldn't make it appointment viewing.

Moaba: Watch It Plenty of Chuck Lorre's signature raunchy humor, but it has much more heart than his other CBS hits.

Harnick: Watch It Surprise! This was actually funny? It's typical Chuck Lorre/CBS humor, but Anna Faris and Allison Janney make it fun to watch and worth checking back in on.

Prudom: DVR It It wasn't particularly funny, but showed more potential from its similarly great cast than "The Millers." It won't be appointment TV, but I might give it another look.

Weingus: Watch It In the opening minutes of "Mom," Anna Farris is crying hysterically, but what looks like a disaster of a pilot quickly turns around when we meet her adorable son, rebellious daughter and her mother, played by Allison Janney. Each joke is funnier than the last, and Farris is somehow charming while playing a loud, messy basketcase. 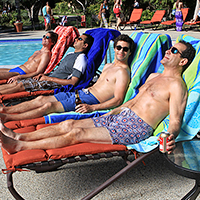 "WE ARE MEN" Read more about "We Are Men" and watch a preview here Furlong: Skip It Macho premise aside, the lead guy here just feels really, really average, especially next to Tony Shalhoub, Jerry O'Connell and Kal Penn. Also, I could live without seeing any of them in a swimsuit (or speedo, O'Connell!) ever again.

Etkin: Skip It Way too much Jerry O'Connell in a speedo for my taste and the bro jokes just fell flat. I'm definitely not the demographic for this one, but I didn't laugh at all and only smiled once (at the sight of Alan Ruck).

Moaba: Skip It I wanted to like it, ‘cuz I’m a man. But man, that was cheesy.

Harnick: Skip It Boring. It just didn't gel. This could be CBS's first casualty of the season.

Prudom: Skip It Not my demo and not funny. Every woman comes across as a conniving shrew or a mindless easy lay; haven't we moved past this lazy trend of douchey guy "comedies" yet?

Weingus: Skip It If you're in the mood to watch a bunch of shirtless guys sitting around being sexist, by all means watch "We Are Men." But be warned: There's a 99.9% chance you'll find the content offensive. 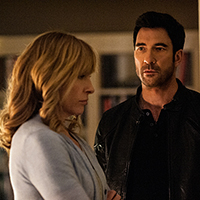 "HOSTAGES" Read more about "Hostages" and watch the trailer here Ryan: DVR It It's an interesting premise and there's potential for this to become a "24"-style escapist thriller. I'll give it a shot.

Furlong: DVR It More please! I'm not sure if this will be on the top of my to-do list each week, but I'm fascinated by the pilot (and quite curious about how they'll keep delaying the inevitable).

Etkin: DVR It It's hard to see how this show will continue on for a whole season, let alone multiple seasons without dragging on the central storyline for way too long. I was certainly intrigued, but I don't have that much hope for this very un-CBS drama. Five points for Toni Collette's awesome bangs though.

Moaba: Skip It Pretty much the same lame premise as “The Mob Doctor,” but instead of forcing the compromised doctor to kill mafia people, it’s the president’s life on the line. Somehow, the higher stakes make it even less watchable.

Harnick: DVR It I will follow Toni Collette anywhere on TV. This show is ambitious -- perhaps too ambitious, but I'm willing to try it again.

Prudom: Watch It Gripping, tense and full of intrigue right from the start, I thought this thriller was the best drama pilot of the season. I'm dubious about its long-term potential, since the initial plot seems pretty finite, but I'm on board for now.

Weingus: Skip It Too many plotlines, too little time! Not only was I confused throughout this entire pilot, but there was an unnecessary amount of blood and guns. 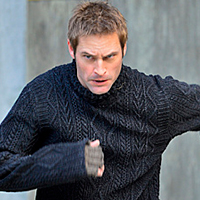 "INTELLIGENCE" Read more about "Intelligence" here Ryan: Skip It As much as I want to watch Josh Holloway on my TV every week, this espionage drama was stale, predictable and formulaic. Sawyer from "Lost" deserves better.

Furlong: Skip It The first minute of the pilot was all Josh Holloway looking great, totally silent ... and then the show started and completely lost me. Laughable.

Etkin: Skip It Josh Holloway is nothing without his over-the-top sarcasm and good looks, but only one of those things is on display here. The show has CBS darling Marg Helgenberger, action and crime-solving, so it's right on target for the network's audience, but I am not a part of it. I struggled to finish this one.

Moaba: Skip It Sawyer as an indestructible superagent with Google glass inside his brain could have been cool, but a show with an unrealistic premise and a significant hokey factor shouldn’t take itself so seriously.

Harnick: Skip It This felt like a fake show that we'd see in the background on "30 Rock" or something.

Prudom: DVR It Josh Holloway is a serviceable action hero, while Meghan Ory has much more to do here than on "Once Upon a Time," but the final product was dull. I'll watch a couple more, but mostly it makes me miss "Chuck," which did it better with humor and heart.

Weingus: Skip It This is a show about a guy running around with a chip in his head. It could be a cool and even thought-provoking, except that every scene is so intense and overacted that it ends up being a dramatic mess.

Please note: Screeners for new CBS series "Friends with Better Lives," "Reckless" and "Bad Teacher" were not yet made available to press when this published.