Effective treatment of Irritable Bowel Syndrome includes medication, changes in lifestyle and diet; and stress reduction. A number of studies has shown that Cognitive Behavior Therapy (CBT) is an important adjunct to standard medical treatment.

For example, in a study published in Clinical Gastroenterology and Hepatology in December 2015, a meta-analysis assessed the immediate, short-term, and long-term efficacy of psychotherapy for reducing GI symptoms in adults with IBS. On average, individuals who received psychotherapy had a greater reduction in GI symptoms after treatment than 75% of individuals assigned to a control condition. These effects remained significant and medium in magnitude after short-term and long-term follow-up periods (Laird et al., 2015).

CBT is usually short-term, goal-directed, and skills based. Developed by Aaron T. Beck, M.D., in the 1960s, it has been applied to help a wide range of psychological problems and medical conditions with psychological components. In the context of a highly supportive relationship, therapists help patients set goals, identify and solve problems, and learn specific skills to change their unhelpful thinking and behavior so they can make lasting changes in their mood and functioning. At each session, patients record responses to their unhelpful and inaccurate thinking along with steps they have committed to take in the coming week.

Here is just one example of a CBT intervention:
Charles, a 22 year old college student, was overwhelmed at the prospect of having to change his eating and sleep habits. Always "the nervous sort," he had no idea how to reduce his stress. A month after his initial diagnosis and treatment, he still hadn't made the necessary changes to get his condition under control. Whenever he thought about the changes he had to make, he thought, "It's just too much. I can't do it. I might as well give up. " As a result, he felt anxious and immobilized, and continued to engage in behaviors detrimental to his health. His physician referred him to CBT.

Charles' therapist did a combination of problem-solving, identifying resources, and evaluation of his automatic, negative thoughts. She asked Charles to summarize what he thought would be important to remember, and wrote down his response on a card so he could read it at least once a day. The card said, 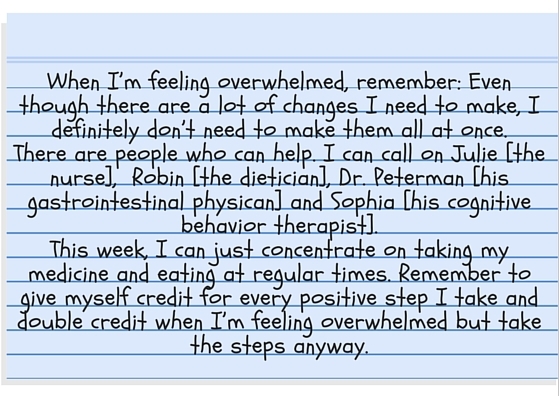 When Charles returned the following week, he was feeling somewhat better. Taking these initial steps helped him feel more in control. He was ready to tackle making some changes in what he ate and in reducing his stress, through modifying his thinking and learning mindfulness techniques.