The U.S. has the world's highest incarceration rate, with 2.2 million people, or nearly 1 in 100 behind bars. Rising immigration detentions and the disastrous "war on drugs" have helped push inmate numbers to record highs in recent decades. While this growing, largely nonviolent population has stretched federal and state prisons and budgets past their limits, the prison industrial complex has eagerly expanded to accomodate — and anticipate — new masses of inmates.

Corrections Corporation of America (CCA), now the nation's largest private prison company, was founded just over 30 years ago in Nashville. Since then, it has become a multi-billion-dollar-a-year business with more than 60 facilities across the country. Meanwhile, the U.S. prison population has grown 500 percent.

A look at the CCA's annual shareholder reports over the past few years shows an aggressive business strategy based on building prison beds, or buying them off the government, and contracting them to government authorities — sometimes with decades-long contracts mandating minimum occupancy rates as high as 90 percent. Profits, after lining the pockets of shareholders, are used to create more beds and to lobby state and federal agencies to deliver inmates to fill them. The resulting facilities can be violent and disgusting.

To celebrate 30 years and counting of CCA, here are 30 telling snippets from the company's annual reports and letters to shareholders: 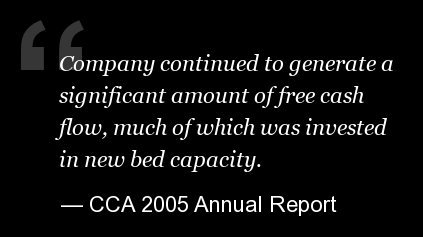