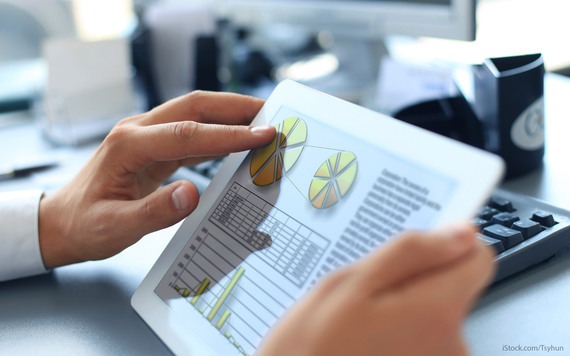 After declining since 2007 to the point of hitting rock bottom in 2014, CD rates are now finally on the rise. With the Federal funds rate raised from near zero to the 0.25- to 0.50-percent range, interest rates across the board are rising or expected to rise.

Even though these rate increases are slow-coming and incremental, every little bit helps when it comes to earning interest on your saved money. Here's some information on the new certificate of deposit rates, including your options, where to get the best interest rates and how to take advantage of the expected rate increases.

The Federal Funds Rate and CDs

The federal funds rate -- the rate at which Federal Reserve banks borrow overnight funds from each other -- is also the rate that most financial institutions use as a benchmark for setting all consumer interest rates, including mortgage rates, auto loan rates, savings account rates and rates for certificates of deposit.

As shown in the first graph, in the 10-year period from 2006 to January 2016, the federal funds rate rose then dropped drastically as the result of the housing bubble burst. After reaching a peak of 5 percent in 2007, it fell almost 310 basis points the following year to 1.93 percent as the Federal Reserve tried to encourage consumers to continue borrowing.

Despite these efforts, the U.S. economy fell into the deepest recession since the Great Depression and has been slow to recover. In 2014, the average annual fed funds rate dipped to a 10-year low of 0.08 percent. Although some improvement was evident -- the rate was at 0.10 percent in June 2014, up from 0.07 percent in January 2014 -- progress remained anemic.

The sluggish economic recovery restricted the Fed from making any drastic changes, since a sudden increase in interest rates could derail any progress and send the U.S. back into recession. Until last December the Fed had continued to artificially hold rates at historic lows, in part by keeping the target rate near zero, in order to spur economic growth.

Related: What Is the Minimum Deposit for a CD?

The graph below shows the trend of the Federal funds rate since 2016. The drastic drop indicates the Great Recession, which was spurred by the housing bubble burst. 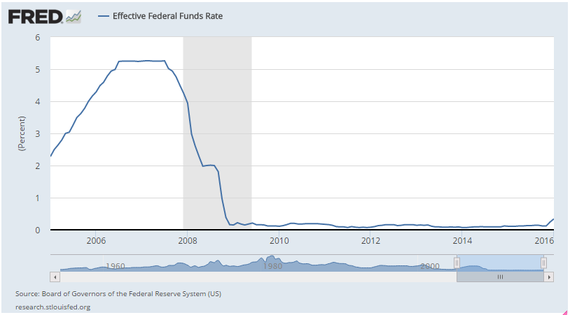 The second graph shows the trend of CD rates at different terms over the past 10 years. The drastic drop mimics the trend of the federal funds rate at the time, and the slight and gradual rise is evident approaching the current period. 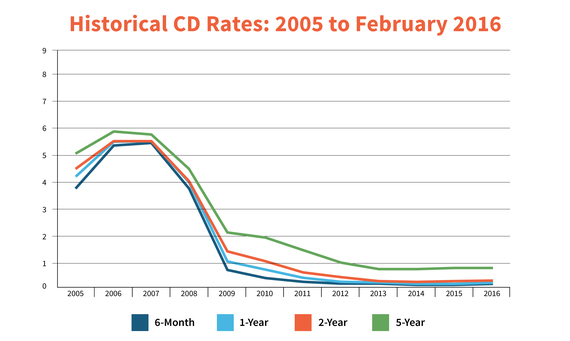 In December 2015, the Federal Reserve decided to raise short-term interest rates for the first time since the financial crisis. Fed officials said the economy was strong enough to keep growing with a little less help from the central bank. They cited job growth as a key factor in their decision to raise rates. Officials said they remained concerned about sluggish inflation, and so the rate range was raised conservatively, from near zero to 0.25 to 0.50 percent. The Federal Open Market Committee (FOMC) said that the expectation was that "economic conditions will evolve in a manner that will warrant only gradual increases in the federal funds rate."

In January 2016, the Fed reported that the federal funds rate would continue to be held at the target rate announced in December, though they confirmed FOMC expectations that economic activity will expand at a moderate rate and labor market indicators will continue to strengthen. Inflation is still expected to rise to 2 percent.

Based on their objectives of maximum employment and the 2 percent inflation rate, the Committee will decide whether rates will be bumped up again. The federal funds rate is expected to remain below what predicted rates will be in the longer run, as they expect to lift the rates gradually in a test of the economy's ability to stand more independently with less support from a highly accommodating monetary policy.

CD interest rates are now past rock bottom and have begun to rise again. Although the rates are rising slowly, they are still improvements over the past rates and they will continue to increase. This potential continual hike in rates could be significant over the next few years, so now is a great time to start shopping around for better CD interest rates and strategize how to take advantage of their expected gradual increase.

In an extremely low-rate environment, it's important for savers to seek out relatively high-yield options. Fortunately, though rates are down across the board, some CD products are offering above-average rates that depositors can leverage to help cash savings keep pace with inflation.

The following are current CD rates from GoBankingRates' Best Banks 2016. The tables highlight the highest yields for each of the following CD terms: six-month, one-year, two-year and five-year. Note that some of these interest rates might be dependent on depositors meeting special terms and might not be available to all customers.

Over the 10-year period to 2016, the national average interest rate for a 6-month CD has fallen a total of 528 basis points and is currently about 0.13% APY. Rates in this category have risen one basis point from last year.

Over the 10-year period to 2016, one-year CD interest rates have declined by 533 basis points to a current average of 0.21% APY. In 2016, rates for this CD category have risen one basis point from last year.

Over the 10-year period to 2016, two-year CD interest rates have declined by 522 basis points to a current average of 0.35% APY. Rates for this CD category have risen one basis point from this time last year.

In general, interest rates vary by region depending on the number of local banks available, but smaller local banks and credit unions offer higher rates compared to large, multi-state and national banks on average. Additionally, online banks have emerged as a source of high-yield certificates of deposit thanks to lower overhead costs that allow savings to be returned to customers in the form of higher interest rates.

Although interest rates might be increasing only slightly, over time and with the right strategy these small increases can add up significantly. Here are a few ways you can take advantage of increasing interest rates on CDs, plus some saving alternatives to consider:

Shop around for CDs and look for higher rates. Don't feel tied to your current financial institutions. Check out the different options and find the CDs with the best interest rates at which to lock in your money. Compare the CD rates and terms offered by large, national banks, local banks and credit unions. Online banks are another great option; because of lower overhead costs they can pass on the savings to depositors in the form of significantly higher CD interest rates than what you will find at brick-and-mortar banks.

Don't try to time the interest rates. Investors might do their best to anticipate changes in financial markets to maximize their investments, but this is tricky business and hard to do with CD interest rates. Markets are not easily predictable, and the Fed has highlighted that their rate increases will be gradual and based on data, rather than periodical and based on time. Allow yourself some flexibility to take advantage of current interest rates as they change, without losing out by committing yourself to a particular maturity.

Ladder your CDs. CD laddering is an old strategy that could be particularly useful now; it allows you to spread out your money and earn periodic cash and interest. To ladder your certificates of deposit, divide the amount you're investing into CDs with different maturity dates. Although interest rates might be smaller with this method, so are reinvestment risks. You will have the chance to roll over your investments sooner and at various times, so this method is ideal for helping you take advantage of higher rates over time.

For example, you could invest in six-month and one-year CDs, then when the six-month CD matures, reinvest that principal and its interest into a two-year CD, and do the same when the one-year CD matures. You'll have your money maturing on a regular, periodic basis and will have flexibility plus the benefit of a higher yield of the two-year CD term.

Invest in short-term CD accounts over high-yield CD accounts. Although high-yield CD accounts might still seem especially desirable since interest rates have been low for so long, with these kinds of accounts your money will be tied up and tied into a particular rate. The highest CD rates of the moment might no longer be the best available a year from now. If rates should suddenly increase, you'll want to be able to invest your money at the higher rates. Choosing short-term CD accounts will allow you some flexibility and freedom to adapt to rate changes.

Check out variable-rate CDs. Variable-rate certificates of deposit -- sometimes called adjustable-rate CDs -- feature an interest rate that varies. There are a number of different ways the rate can be determined including the prime rate, the Consumer Price Index (CPI), treasury bills, or a market index. The amount of interest you'll get paid at the end of the term is usually based on the difference between the beginning and final indices.

Choose a bump-up CD. Bump-up CDs -- also called step-up CDs or rising-rate CDs -- allow you to take advantage of rising interest rates by giving you a one-time option to "bump up" the interest rate paid. Some bump-up CDs might allow you to move up to a higher rate more than once. Bump-up CDs generally yield lower rates than that of similar, regular CDs. Read the terms carefully because your options might vary: Some banks will automatically raise your rate at scheduled intervals, and some might allow you to choose when to step up your rate.

Compare the alternatives. Depending on your personal preference or financial needs, you might decide that CDs are not the right investment strategy for you. In that case, here are a couple alternative saving options to consider:

Source: GOBankingRates. Although the information has been obtained from the various financial institutions, the accuracy cannot be guaranteed.

All interest rates are accurate as of Feb. 25, 2016. Rates are subject to change at any time at the discretion of individual financial institutions. Additional terms and restrictions could apply. Verifying rates with the bank/credit union before opening an account is strongly encouraged.

Casey Bond contributed to the reporting for this article.