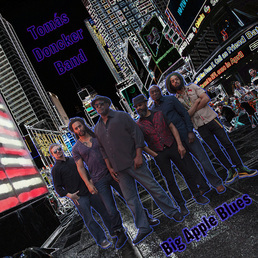 What do you get when you put a Pulitzer prize-winning poet and a famous blues guitarist in the same room? Answer: expressive, heavy duty, industrial strength blues.

The guitarist is Tomas Doncker, who learned his licks during his time with James Chance & The Contortions, Yoko Ono, the Itals, and Prince Charles Alexander, along with a bunch of other A-list musicians. The poet is Yusef Komunyakaa, the scholar, professor and Pulitzer prize-winner. The two artists collaborated and came up with Big Apple Blues, a stylish, imaginative rendering of classical blues riffs with just a hint of jazz. Doncker calls his music "Global Soul" because it integrates stylistic influences from around the globe.

The first song on the CD is the title track, which opens with a cacophony of bluesy guitar wails, moans and screams. hen the song evens out to reveal the voice of Donker, like gravel sliding down a metal chute. The lyrics, as one would expect, reverberate with meaning that evokes a deep emotional response.

A favorite song is "Can't Say No," which speaks of "low down South blues," the kind of blues music that worms its way into your head and your bones, leaving listeners unable to say no. It simply has to be listened to. Another favorite is the happy-go-lucky "Coney Island." Komunyakaa's lyrics are surreal in their ability to exhume wonderful memories of days gone by. The result is nostalgia without any vestiges of regret.

Two of the tracks, "Hellfighter of Harlem" and "Ground Zero," demonstrate Doncker's versatility as an axe-man. Both songs evoke the viscous, dense licks of a Jeff Beck or Eric Clapton in blues mode. Thematically, the tunes are dark; the lyrics speak of death and violence and war, like something right out of Apocalypse Now.

The level of musicianship is equal to the quality and evocative power of Komunyakaa's lyrics. Tomas Doncker handles vocals and guitar; David Barnes plays harmonica and adds vocals; Nick Rolfe performs on keyboards and vocals; Josh David is on bass and vocals; drums are by Mike Faulkner and Damon Duewhite; and Mark Henry thrives on sax. The band is tight and the arrangements are not only tasteful, but appropriate. And the energy level is just about right, always.

Big Apple Blues is the perfect sequel to Doncker's previous effort, the estimable Moanin' at Midnight: The Howlin' Wolf Project, which some people thought would be hard to compete with, much less surpass. With Big Apple Blues, Doncker has effectively silenced his critics. This is a stellar follow-up to The Howlin' Wolf Project. Fans of blues music should be certain to add this CD to their collection.