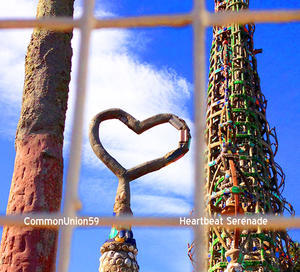 CommonUnion59 is made up of two people: Steve McKenzie and Laura Malasig. Their latest offering, Heartbeat Serenade, is slated for release shortly and boy, is it a doozy!

What makes Heartbeat Serenade so great is Malasig's voice. It's not what we'd think of as a "strong female voice," but it doesn't have to be. There's a entrancing quality to it; it's the kind of voice that's comfortable to your ears, but just distinctive enough to make you want to know find out who she is. Malasig's voice harks to Stevie Nicks, Linda Ronstadt and even Art Garfunkel, with its tantalizing yete wisps of familiarity.

The first track on the album sets listeners up for aural enjoyment. "It's Alright" has the feel and sound of 1960s Southern California soft rock' it's happy and peppy, rejoicing in the simple miracle of being alive. It's a simple song with a curious feel of suppressed energy and Malasig's voice is rich, it's exquisite lilting always under control.

One of the album's highlights is "Not Dead Inside." Here, Malasig's voice, affable and intent, moves to the motion of the music -- or does the motion of her voice generate the music? It's difficult to tell. But it doesn't matter because her voice creates an images in the mind. Simplicity itself, "Not Dead Inside" begins with only a piano and Malasig's melodic tones; then the song begins to assert itself, adding guitar and drums. As the song ramps up, Malasig's passionate voice drives home the point: she's not dead inside.

McKenzie of course, is always there supporting. He contributes back-up vocals, and his voice is the perfect complement to Malasig's. On three of the tracks -- "Heartbeat Serenade," "Today," and "Catch the Wind" -- McKenzie performs lead vocals. His voice is sensitive and pleasing, but not as unique as his counterpart's. But there is no denying his talent on the guitar and banjo, where, along with drummer Kevin Hayes and bassist Jake Leckie, the band showcases its musicianship.

The songs on Heartbeat Serenade cover the spectrum of human emotions: love, happiness, our hopes and dreams, heartbreak, and always, the sheer delight of being alive. The arrangements are simple, eschewing complexity for the modest. The result is a stellar album. Heartbeat Serenade is one of those special albums that doesn't appear often enough.