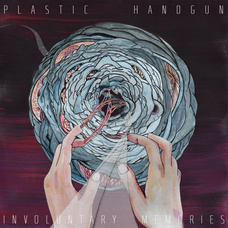 The name of the band is Plastic Handgun, and Plastic Handgun has just one member: Mark Di Giovanni, who hails from Toronto, Canada. Di Giovanni just released his first full-length (digital) album of experimental rock/electronic music. For some audiophiles, the term "experimental rock" is a red flag that means turn and run away at full speed, because such experiments have a nasty habit of starting out like Dr. Jekyll and ending up like Mr. Hyde. In other words, experimental rock can deliver a cruel and hazardous listening experience.

Fortunately, Plastic Handgun eschews musical absurdities and melodic paradoxes for experimental rock that is easy on the ears and doesn't test listeners' sanity. The album is called Involuntary Memories and definitely merits the expenditure of any audiophile's limited supply of disposable time.

The tracks on Involuntary Memories are densely layered with variations of the same underlying complex textures. Its themes are remarkably similar to the leitmotifs attributed to Richard Wagner; although, of course, the results are totally dissimilar in sound and genre. But the concept is the same, and the benefits, musically speaking, are wonderfully chromatic, producing tonal colors that flow dramatically well.

The best track on the album is "The Dust You Kick Up Is Too Fine," which is vaguely reminiscent of an Austrian waltz, riding along on the smooth progression of its melody. The mood of the composition is a combination of amused indifference and almost flippant disdain. Put simply, it works.

"The Double Life" might be the most mainstream or commercially viable track, with its guitar-dominated charisma. It sounds like a slower version of Dickey Betts jamming while tripping on LSD. "Lisbon" is one of the album's only pieces with lyrics. They're minimal, but nicely done, functioning as a counterbalance to the tune's dancing-in-the-abyss ambiance. It dredges up memories of the dark mystical dance that occurs in Legend, where the heroine spins and twirls in front of Satan's mantled fireplace.

It should be noted that many of the tracks on the album would function well as musical scores for Hollywood movies. The tracks have soundtrack flavor to them, like something out of Brad Pitt's Killing Them Softly or Hollywood's stylistic ode to Greek mythology, Immortals. But Di Giovanni avoids the trap that many experimental rock musicians fall into, that of monotony, where one song sounds like all the others. He accomplishes this by utilizing different themes and musical effects. Thus, each song carries the aura of an original composition created in a vacuum, rather than simply as portions of a larger blueprint.

Involuntary Memories is an example of what experimental rock can and should be: a delightful listening experience, full of epic music.