Heroin abuse and deaths linked to heroin have surged over the past decade, according to a report released Tuesday from the Centers for Disease Control and Prevention..

Between 2002 and 2013, heroin abuse or dependence in the U.S. increased by 90 percent, the report found. During that time period, the number of people who said they had used heroin at least once in the last 12 months rose by 65 percent, an increase of 300,000 people.

Heroin use increased across all income levels and most demographics. Notably, as the CDC pointed out, this includes groups that have typically seen lower levels of heroin use, such as women, people with private insurance and people with higher incomes.

The increase in use and abuse led to a huge increase in heroin-caused deaths. The rate of death by heroin overdose nearly quadrupled between 2002 and 2013, the report said, with 8,200 people dying in 2013. 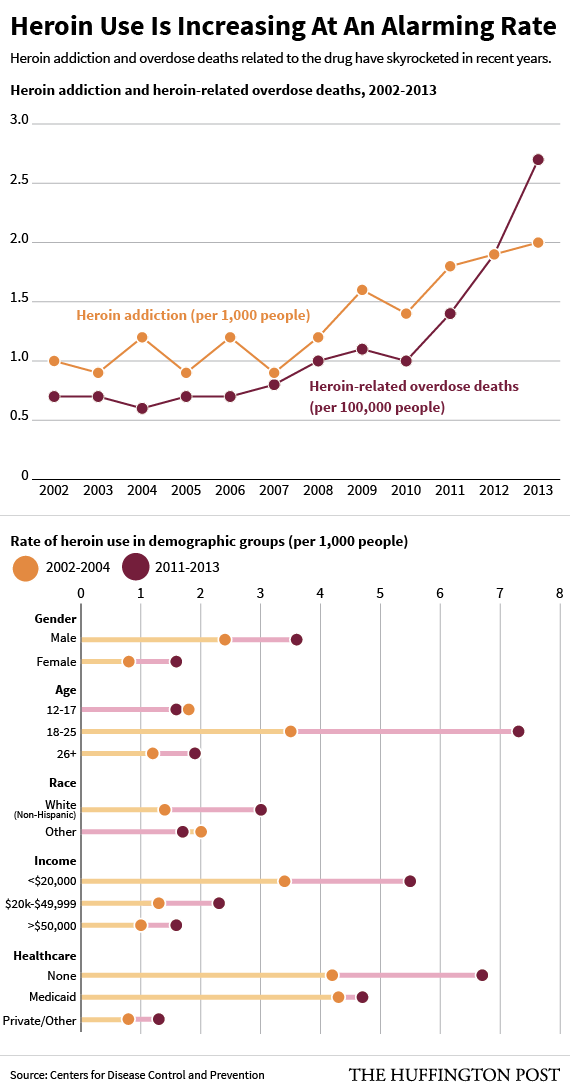 One of the biggest drivers of the uptick is people who become addicted to prescription opioid painkillers and then switch to heroin, a much cheaper substitute that produces largely the same effect.

"An increasing number of people are primed for heroin use because they were addicted to an opioid painkiller," CDC Director Tom Frieden told The Associated Press..

People addicted to opioid painkillers are 40 times more likely to become addicted to heroin, according to the report.

The CDC suggested several steps that states can take to curb heroin use, including:

— Expand access to and training for administering naloxone to reduce opioid overdose deaths.

— Help local jurisdictions to put these effective practices to work in communities where drug addiction is common.

CORRECTION: This article originally misstated that women, people with private health insurance and people with higher incomes saw the highest increase in levels of heroin use. It has been corrected to indicate that while heroin use did increase for these groups, they were highlighted not because they had the largest increases, but rather because they have typically had lower levels of usage.