Yesterday I got the email I'd been waiting on for years. It was Alice, my ex and the mother of my children, asking, "Hey which smoking cessation do you think is best? I'm having no luck on my own." I might have to get a new job now.

You see, I run one of the CDC's six tobacco disparity networks, the LGBT one. We're called the Network for LGBT Health Equity, and we're part of The Fenway Institute. We're around to help provide resources to the local LGBT tobacco control programs and urge the states to include LGBT people in their broader tobacco control work. For years I've been using Alice's story as an example of how LGBT people are not being reached by mainstream cessation strategies. I'd stand in front of a bunch of representatives from some state department of health or another, and I'd wind up the example with the warning, "I'll leave this arena the day that Alice finally quits smoking."

It's a brutal reminder of the LGBT tobacco disparity when you spend all day urging states to tailor tobacco control programs for the LGBT communities, and then you go pick up your kids and smell smoke on their clothes. For all my efforts I wasn't even able to protect my own kids from the dangers of tobacco smoke, dangers that only seem to grow every time people review the science. Last time they did, the Surgeon General said, "If you just pass a cigarette once, I frankly can't promise you it won't give you cancer." Gulp.

Alice isn't a problem; she's a great woman and a great mother to the kids, and she really wants to quit smoking. The problem is that very specific issues have led to a large LGBT smoking disparity, and one-size-fits-all solutions don't fix it.

We do have a large smoking disparity. It's very likely that smoking is the single greatest health issue stealing years off the lives of LGBT people. CDC just released the first national data, and it showed that LGBT people smoke cigarettes at rates that are nearly 70-percent higher than the general population.

Why do LGBT people smoke so much? We've been targeted by the tobacco industry, we're extremely likely to seek social acceptance as we come out, and the pressures of stigma can nudge anyone toward unhealthy behaviors.

That's why I was so pleased and proud this Pride season when CDC's Office on Smoking and Health created its first-ever national LGBT-oriented smoking cessation ad for the Web. You may have seen the TV ads for the Tips From Former Smokers campaign. As they rolled out this historically large, national smoking cessation campaign, CDC listened to us and made sure that they tailored a Pride ad just for LGBT smokers. If you didn't catch it at your local Pride, then -- drumroll, please -- let me introduce you to it now: 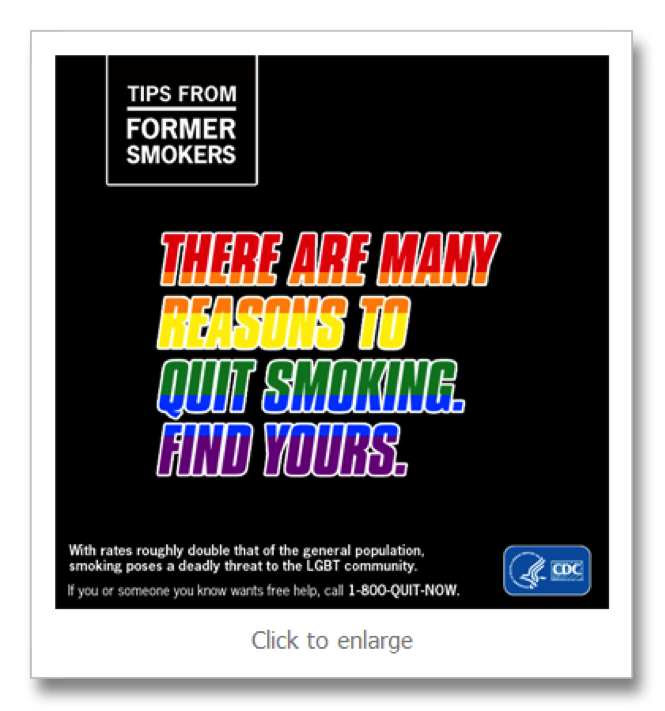 I can't even describe to you how much this small ad means to me. This is acknowledgement of the LGBT community's history of difficulties with the health care system. It's acknowledgement that CDC knows that we scan to find out if things are safe. We pay more attention when something is speaking to us. It's acknowledgement of our smoking disparity. See that little line at the bottom about how we smoke at a rate roughly double that of the general population? And it's the fix, too. That innocuous little number at the bottom, 1-800-QUITNOW, will actually connect anyone in the country with free, state-of-the-art, individualized smoking cessation counseling.

Most importantly, CDC gets it. Community-specific issues built the LGBT smoking disparity, so community-specific strategies need to be used to eliminate that disparity. Let's hope every state tobacco control program follows suit.