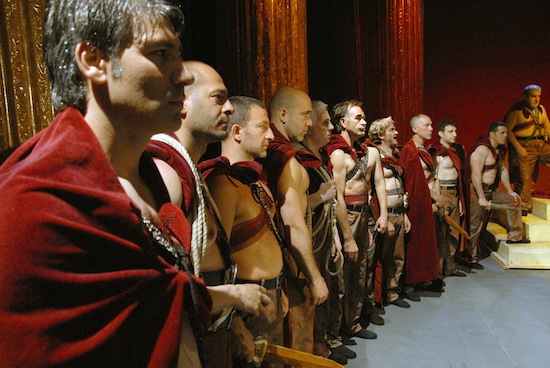 There are two outstanding events that shaped a personal Italian renaissance for me in 2012. One was interviewing the great Nanni Moretti in his office, after having been mesmerized by his latest film We Have a Pope at the Abu Dhabi Film Festival. The other was watching the Taviani brothers' Caesar Must Die at the Nuovo Sacher in Rome, on a balmy Sunday afternoon, and being so absorbed that I never once regretted foregoing the glorious sun shining outside for the cool, dark cinema hall.

Incidentally, both of those incredible experiences ended up being courtesy of Moretti, who not only owns the Nuovo Sacher in Rome's cool neighborhood of Trastevere but also believed so strongly in Caesar Must Die that he picked up distribution rights in Italy through his Sacher Distribuzione and in so doing, turned the film's destiny downside up. 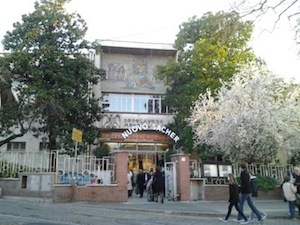 Before Moretti, Paolo and Vittorio Taviani had struggled with finding a distributor who would give their return to filmmaking, after five years of absence, a chance. Yes, the very masters whose best known Padre Padrone is still considered one of the cornerstones of Italian cinema, had been ignored by the often short-sighted distributors in a country that once ruled the culture of movies. Caesar Must Die of course then went on to win the Golden Bear at last year's Berlinale, cementing Moretti's artistic visionary status, as well as the film's great, contemporary value.

The basic premise of the film is simple, yet haunting: to recreate Shakespeare's Julius Caesar inside Rebibbia, a maximum security prison on the outskirts of Rome, with a group of inmates. To quote one of the lines in the film, these men were "born to play these roles" and the Tavianis cleverly keep the audience on their toes by filming in a way that walks the thin line between fiction and documentary. It's all a bit like peeking in somewhere you should not be, and that's what makes the film brilliant. And to seal the film's perfection, Shakespeare's work lends itself so well to the modern world, where words and ideas are almost always taken at face value and a rumor can start a revolution.

I admit that I expected the film to be at least nominated in the Foreign Language Film category for this year's Oscars. Perhaps the oversight, first by the Italian distributors then by the Academy, reflects a need to negate what is happening daily in the news, because the story of Julius Caesar is undeniably being played out in Syria right now. Whether or not we agree or support Assad's regime -- or even Morsi's presidency in Egypt -- through the western media we are accepting the reports of a few as the only truth, when we know better. We know that there are always multiple sides to a story, just as life is lived in shades of grey, not the black and white of evil and good.

Watching Caesar Must Die may not have changed my life, but it changed my perception and I shivered at the moment when, in the Taviani's story, Caesar's faith is sealed. Perhaps I'm an idealist but I sometimes feel as one of the characters in the film who utters these unforgettable words: "Since I've come to know art, this cell has become a prison." Knowledge is supposed to set us free, but not if we discover through it that the same mistakes are still being played out, worlds away and centuries later.