At Catskill Animal Sanctuary, one of our most important jobs is to ensure that our animal residents -- some 250 or more at any given time -- thrive. Many people take on this role as "pet owners," and are delighted when our trusting companions evolve into full-fledged family members.

As a species, however, we humans don't generally consider the individuality of other animals. Most certainly, we don't usually consider that the animals we eat might, if given the chance, develop into larger-than-life beings who'd crush in an instant any bias we held about their species.

But at farmed animal sanctuaries, our job is to ensure that cows and chickens, pigs and sheep thrive. The animals' job is to show us what fools we've been for considering them inferior to us. And of all the animals who've set me straight over the years, none have done so with more clarity or panache than Paulie the chicken. In fact, the chickens, more than any other species, have shown that, when it comes to our perceptions of farmed animals, we humans are hopelessly, and for them, tragically -- bird-brained.

Our beloved rooster Paulie insisted on eating lunch with us. If we put him outside the front door, he ran around back and screamed holy hell until we let him in. He'd then find Alex among all of us gathered at the table and begin pecking Alex's shin. Why? Alex brought berries and sunflower seeds to lunch. If Alex didn't share his lunch quickly enough, Paulie got increasingly insistent, until he was screaming and squawking and hopping up and down, saying in his own language, "Alex: I WANT BLUEBERRIES!" exactly like the child who begs for candy. Paulie knew the sound of my car, and chased it until I stopped, picked him up, and took him for a ride. He loved my dog Murphy, often napped with him, ran to anyone who called his name, and bravely broke up pig squabbles.

After many years with us, Paulie died in my arms, gently rubbing his head against my arm, over and over again. I didn't need a scientific experiment to prove that he was telling me that he loved me.

I could tell dozens more stories of remarkable chickens. Stories of Barbie, the chicken who so loved a sheep named Rambo that she ignored all other animals around the barnyard and spent her days with him, often lying right next to him, pushing her big bird body into his wooly side, sometimes climbing on top of him to use him as a perch or a sofa. Jailbird and Emmet, ambassadors supreme, who sit for hours each weekend in the laps of unsuspecting visitors, saying so very clearly, "Everything you think about my species is wrong." What they also help us understand is that every single animal we thoughtlessly consume is a someone.

Every September, the National Chicken Council, the trade association that promotes the chicken industry, sponsors National Chicken Month. The NCC encourages retailers to use images like the one below to bolster sales. 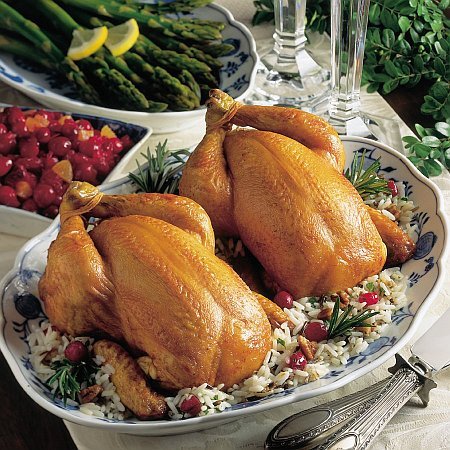 During National Chicken Month, the NCC wants us to eat chicken. Period. It does NOT want us to think about chickens, but I hope you will:

1. Think about how smart they are. Chickens are more clever than toddlers when it comes to many basic skills-- this video shows just how clever they can be!

2. Think about how they're grown to feed humans. Here's an excellent article that sums up the short, wretched lives and deaths of hens raised for their eggs. As for the chickens grown for their meat, aka "broiler chickens": they're forced to grow to slaughter weight in just 47 days, and go to their deaths peeping like baby chicks: because that, indeed, is what they are. If children grew that quickly, they'd weigh 500 pounds at 10 years old.

3. Think about what growing 8 billion of them every year in this country alone is doing to our planet.

4. Think about a different way of eating.

In short, during National Chicken Month, I invite you to think about more than your taste buds, and I invite you, especially, to think about chickens. These unique and individual birds are really not so different than four-legged family members many of us share our homes with. Chickens like Paulie have proven this to me, to the visitors of CAS, and hopefully now to you, too. This September, let's do our part in making chicken sales drop, NOT rise -- for Paulie, for Emmett, for Jailbird, and for the 8 billion+ chickens who deserve to thrive like our friends at Catskill Animal Sanctuary. 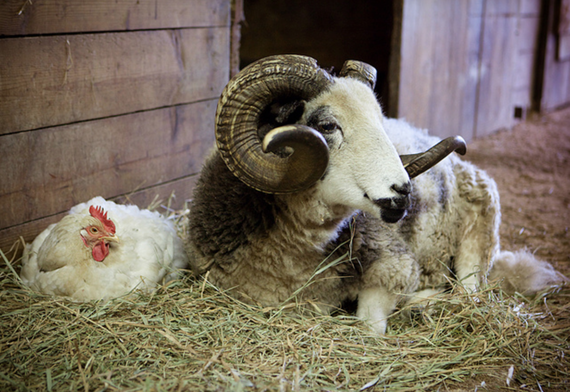 Barbie and Rambo were often seen cuddling up at Catskill Animal Sanctuary. 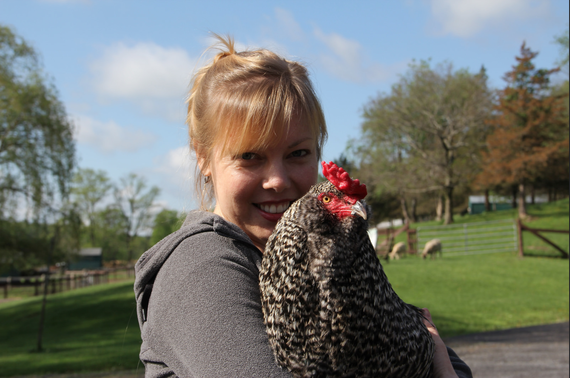 For wonderful mock-chicken recipes, check out our wonderful chef Linda's blog! And for the best chicken salad recipe of all, check out the video below.