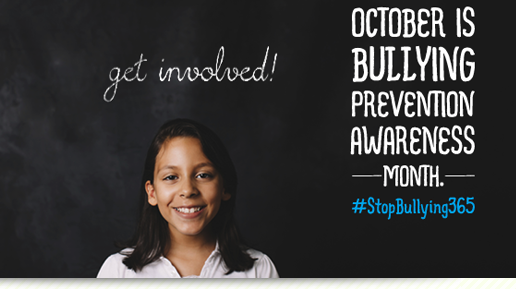 October is National Bullying Prevention Month -- a time to think about how all of us can combat bullying, harassment and cruelty online and off.

Be Part Of The Solution, Not The Problem

One thing we can all do, of course, is to strive to not be part of the problem. If you're reading this, chances are that you already make it a habit to be nice to people and not pick on others. But sometimes we have a way of bullying without realizing it such as excluding someone from our social circles because they're different or not popular, or joining in or failing to interrupt negative behavior when we see others acting inappropriately.

"Dishing dirt" about people is quite common. Although I'm not proud of it, I admit that I've done it and I hear it frequently. Perpetuating negative stereotypes is something we all need to avoid whether those stereotypes are based on age, ethnicity, gender, sexual orientation, national origin, profession, athletic ability, body weight or anything else. And don't assume it's OK just because the person you're talking about may not fit into a typically oppressed group. Negative comments about any group -- including those in the majority -- can be hurtful.

Being an "upstander," a person who intervenes in a positive way on observing an incident or the aftermath of one, has been shown to be effective. Crimes Against Children Research Center scholars Lisa M. Jones, Kimberly J. Mitchell and Heather A. Turner published an article in the Journal of Youth Adolescence which cited research that "bystanders can de-escalate incidents and improve outcomes for victims."

And it doesn't necessarily mean that you have to be there when the bullying occurs to be an upstander. "Peer reactions," said the authors, "can occur during, after or even in-between events, since a bullying incident can involve multiple separate harassment experiences over time."

The researchers also found that negative bystander reactions occurred in nearly a quarter of incidents and "were associated with a significantly higher negative impact on the victim."

Most Bullying Is Witnessed

In most cases, there are witnesses to bullying behavior. Jones and her colleagues reported that "Other youth are present in over 85 percent of episodes" (Craig et al. 2000; O'Connell et al. 1999; Salmivalli 2014). But it was also observed that only a minority of youth (10-25 percent) reach out to help the victim. Peer reactions can occur during, after or even in-between events, since a bullying incident can involve multiple separate harassment experiences over time. Said lead author, Lisa Jones, "negative behaviors by bystanders such as joining in or laughing that has the biggest impact and really makes things feel worse for victims."

The authors analyzed data from a survey of 791 youth and honed in on responses who reported at least one incident of peer harassment victimization in the past year. Note that these negative activities don't necessarily rise to the widely accepted definition of bullying which is typically defined as behavior that is aggressive, repetitive and involves a power imbalance.

The Types of Harassment Were:

The good news is that "supportive reactions were most common."

In about a quarter of the incidents, a bystander tried to get other youth to help (26 percent) or threatened the harassing youth (27 percent).

Still, in about 24 percent of the cases, "bystanders joined in or made the harassment worse. In 23 percent of incidents, bystanders laughed at the victim."

The authors concluded that negative bystander behavior hurts and that "helping youth develop better bystander and response skills is a very promising strategy," though they acknowledged a bit of fuzziness over the effectiveness of positive bystander behavior. Bottom line: To improve bullying prevention efforts, the authors encourage the development of prevention strategies that target educational messaging and skill-building to all youth and adults who might witness or hear about a broad range of youth victimization experiences.

Bullying and harassment don't just happen among kids. Adults can also be victims and perpetrators of bullying and harassment. A 2014 study from Pew Research found that 40 percent of adult Internet users said they had been harassed online, and nearly three-quarters -- 73 percent -- said they had seen someone being harassed. Young adults have it worse: Nearly two-thirds -- 65 percent -- of Internet users age 18 to 29 have been the target of at least one type of harassment.

It also occurs at work. The Workplace Bullying Institute's 2014 survey found that 27 percent of employees have experienced abusive behavior at work while 7 percent are currently being bullied.

Sadly, there are also cases where adults bully youth. It happens among parents, teachers, law enforcement and even clergy. I was bullied repeatedly in middle school by a PE teacher.

If you turn on your TV during campaign season you are likely to see some bad role models when it comes to adult negative behavior. Sadly, some of the people who want to lead our country feel that the way they can get you to vote for them is to deride their opponents. While arguing over policy is always appropriate and it's usually appropriate to point out why one candidate is more qualified than another, there is really no need for name calling or negative campaigning though, sadly, it must work because it's been part of politics for many years.

Here are resources for dealing with bullying and cyberbullying from ConnectSafely.org