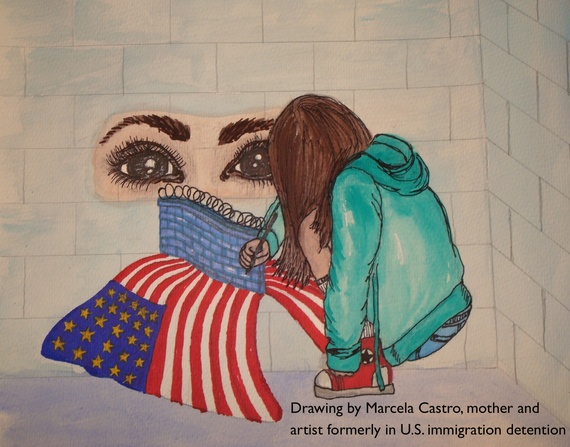 "I cried a lot because it reminded me of when I was kidnapped," said Carolina, a 16-year-old girl from Honduras who was a victim of human trafficking before the U.S. government locked her up in immigration detention.

Carolina is one of the individuals featured in "Drawings By Themselves: Portraits of America," a multimedia project produced by Community Initiatives for Visiting Immigrants in Confinement (CIVIC) in partnership with the International Detention Coalition, Lutheran Immigration and Refugee Service, and the Global Campaign to End Immigration Detention of Children. The project provides children and their parents in U.S. immigration detention with an opportunity to share their experience through drawings and stories in honor of the 25th anniversary of the United Nations Convention on the Rights of the Child (CRC).

The CRC is the most widely and rapidly ratified international human rights treaty in history. Only the United States and Somalia have not ratified the agreement. The Committee for the CRC has clearly stated that detention of children on the basis of their or their parents' immigration status is a child rights violation that countries "should expeditiously and completely cease." Although President Obama has supported ratifying the CRC, his Administration continues to expand the detention of children and their families fleeing poverty, war, or persecution.

Immigration detention is a practice that even for short periods of time has severe, negative effects on a child's physical and mental health. Families are often first welcomed into the country with a chilling experience. Babies, toddlers, and other children are detained by U.S. Customs and Border Protection in hieleras, or iceboxes, which are rooms without windows or natural light where the air conditioning is turned up so high that it is too cold for the children to sleep.

"Reports we have received of these iceboxes are very worrying as it sounds like a deliberate strategy to encourage both children and adults to leave the United States," explains Leeanne Torpey, Campaign Coordinator of the Global Campaign to End Immigration Detention of Children.

The U.S. government is increasingly detaining migrant children and their parents for months and even years in prisons run by corporations such as GEO Group and overseen by U.S. Immigration and Customs Enforcement (ICE). Between June and August 2014 alone, the detention of immigrant families increased by over 1200 percent. First, the Artesia Family Residential Center opened on June 27, 2014, holding up to 672 mothers and their children at an average cost of $266 per person per day. Then, the government converted the Karnes County Civil Detention Center in Texas into a family detention facility and began detaining families on August 1, 2014. The newly-converted family detention center can house up to 532 people at a cost of $140 a day.

Although the Obama Administration confirmed Tuesday it is closing the controversial family detention center in Artesia, the government is contracting with Corrections Corporation of America to open a 2,400-bed family detention facility in Dilley, Texas.

"These places of confinement push these children who are already often exhausted to their physical limits," explains Torpey. "International law, regional courts, and increasingly governments around the world are saying immigration detention is never an appropriate place for a child."

Yet, hundreds if not thousands of children will celebrate their birthday in U.S. immigration detention this year. Ten-year-old Ana, nine-year-old Victor, and two-year-old Martín already have spent six months at Karnes with their mother. All of them have lost weight. When friends come to visit, the children no longer ask to be taken away from the prison. This silence is devastating.

"It's crazy when I think that Martín has now spent almost a quarter of his life behind bars," said Lynnette Arnold, author of Alas Migratorias and a graduate student who studies Salvadoran immigration and has known Ana, Victor, and Martín since they were babies. "I have visited prisons and jails before, but at Karnes, it was shocking to see young children and even babies in this environment. The children knew they were being constantly watched, pointing out the video cameras in the corners of the room and showing fear of the guards."

Immigration detention does not just hurt children in detention. It harms U.S. citizen children like 12-year-old Jamil, who watched as his father, then his mother, then his sister were arrested, detained, and deported. After his father was detained, Jamil drew a picture, now featured in "Drawings By Themselves: Portraits of America." The picture reads, "I wish you were here so that I could give you a hug." Immigration detention also hurts children like Jesús whose father Orlando Arzate was detained for over six months at the Adelanto Detention Center.

"I felt sad. My dad wasn't with me. I had a painful time without him. I got stuck in my head that they were going to deport him," said Jesús, whose family was presented earlier this month with Congressional Certificates of Recognition by Congresswoman Judy Chu at a forum hosted by CIVIC and Neighborhood Unitarian Universalist Church of Pasadena. "Every day that the President doesn't stand up for the immigrant community, I live in fear that my family and my dad will be separated."

Even with President Obama's executive action on immigration, families will continue to be separated, detained, and deported. On this important day for children's rights around the world, we can only hope that on the next significant CRC anniversary, no child in the United States will be a victim of such an inhumane government-sanctioned practice.

"Drawings By Themselves: Portraits of America" tells a story about America today. Through their artwork, the children and parents express their humanity and claim the United States as their own. The project will be launched at 6pm at the Church Center for the United Nations on November 20, 2014. Available at www.endisolation.org/child-detention-stories.