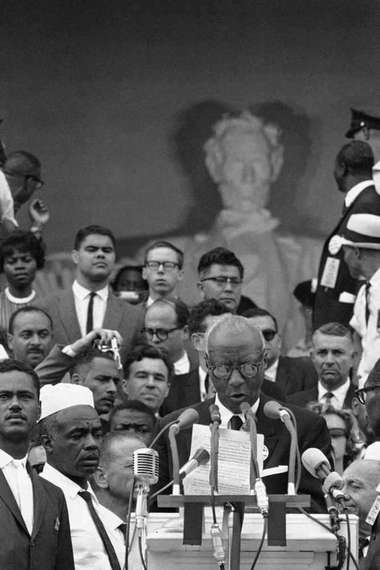 During Black History Month, I'm reminded yet again of the ways that the struggle for civil rights is interwoven with the struggle for workers' rights. Perhaps no one better personifies that link than A. Philip Randolph, the first African-American inducted into the Labor Department's Hall of Honor.

A native Floridian, Randolph moved to New York City as a young man with dreams of becoming an actor. But he would soon be drawn to social justice and union activism. In 1925, he organized rail workers to establish the Brotherhood of Sleeping Car Porters, which he would go on to lead for more than four decades. Facing the longest possible odds and fierce resistance from the Pullman Co., which harassed the workers and attacked Randolph's character, the union succeeded after a dozen years in bringing management to the table to negotiate a contract.

Twice in the 1940s, Randolph successfully took his fight for equality directly to the Oval Office -- and won. As America prepared for war in 1941, discrimination largely shut black Americans out of job opportunities in the growing defense industry. Threatening a mass protest in the streets of Washington, Randolph persuaded President Roosevelt to sign an executive order integrating government defense factories. Seven years later, he would exert pressure on President Truman to desegregate the armed forces.

Randolph's influence would grow in the 1950s, as he was elected to the AFL-CIO Executive Council and helped found the Negro American Labor Council. By the time the civil rights movement peaked, Randolph was one of its elder statesmen (he was closer in age to Booker T. Washington and W.E.B. DuBois than to Martin Luther King). But he was the driving force behind one of the movement's landmark moments -- the 1963 March on Washington.

The march, under the organizational leadership of Randolph and Bayard Rustin, was about more than racial emancipation; it was also a mobilization on behalf of economic justice and the dignity of working people. The full name was actually "The March on Washington for Jobs and Freedom." And if you look at the list of demands, right up there with school desegregation and voting rights was a call for massive federal job training investments for the unemployed and a higher minimum wage.

Randolph died in 1979, spending his final years in a New York apartment owned by the International Ladies Garment Workers Union. To the end, he was animated by the belief that the civil rights and labor rights movements shared essentially the same goals. "We never separated the liberation of the white working man from the liberation of the black working man," he said, in an interview on his 80th birthday. "The unity of these forces would bring about the power to rally to achieve basic social change."

As a civil rights attorney who now leads the U.S. Department of Labor, I couldn't agree more. And as I do my work -- during Black History Month and throughout the year -- I continue to draw inspiration from the courage and moral example of A. Philip Randolph.