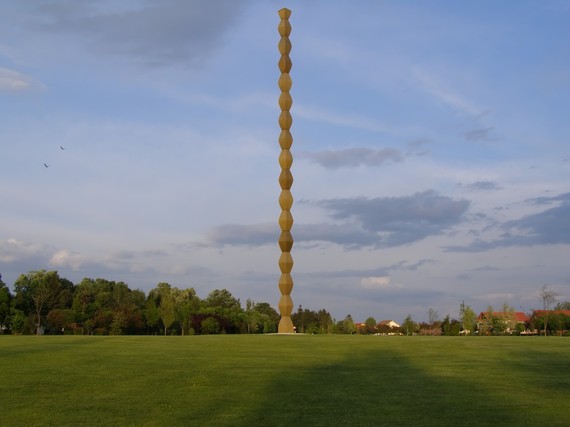 April 18 is the International Day for Monuments and Sites, a day when we remember and celebrate the places that mean the most to us. This year's theme is commemorative monuments. Many of our monuments were built to commemorate an event or to memorialize the builder. From the pyramids at Giza to statues of Stalin and Lenin, these monuments can have very charged political meanings within a moment in time, but also tend to take on new meanings as time passes. Today we may value these places for reasons that have nothing to do with why they were built.

An astonishing commemorative monument in this context is Brancusi's Endless Column ensemble in the small town of Târgu Jiu, Romania, which is today hailed as one of the greatest works of twentieth-century public art. The sculptural ensemble was born as the commission of a sculpture by the National League of Gorj Women. They had in mind a classic World War I commemoration of the decisive battle for Romanian independence that was fought in the town, defending a bridge across the River Jiu. Originally they offered the commission to a local sculptor, Militsa Petrascu, who had recently completed another commemorative work in the town. With remarkable candor, he told them he was not up to the task, and suggested Brancusi. We can only thank him for this act of modesty.

Brancusi was living in Paris, but had been born and raised in the nearby town of Hobita. He promptly accepted the commission. It gave him an opportunity to execute on a large scale a theme that he had worked with over many years -- the "endless column." Brancusi carved several endless columns in wood starting in 1917. The earliest of them is in the Museum of Modern Art in New York, and others can be found in his studio, now conserved as it was left when he died in the Pompidou Center in Paris. The columns were based on a local style of house post in Romania, which Brancusi transformed into an enigmatic and spiritual symbol, brimming with energy. Brancusi described the form as "art imitating nature."

Brancusi planned a monumental column for Târgu Jiu as a symbol of heavenly ascension after death. He carved one module in wood, standing more than six feet high, then proposed that a string of 16 of these modules, cast in metal, would stand end on end, ascending into the sky. As the site of the column, he chose a former hay market standing on a hill above the town. With the help of an engineer, Stefan Georgescu-Gorjan, an ingenious spine was fabricated to hold the modules of the column, which stand upright, one on top of the other, held by the force of gravity. The Endless Column, an artistic and engineering tour de force, was dedicated as the clouds of war were once more gathering over Europe, in 1938.

By then, Brancusi, Gorjan and the patroness Aretie Tatarescu had conceived an even greater scheme. On the site of the battle of Târgu Jiu, Brancusi created a place of contemplation, the Table of Silence. To link it to the town, he built a triumphal arch, the Gate of the Kiss. To reach the Endless Column from the memorial site, you traversed the town from the river's edge, walking through the neighborhoods where the young fallen soldiers had lived, to the hill. He called this the Way of the Heroes.

Although Brancusi had ambitious dreams for public art ensembles around the world, only the one in Târgu Jiu was executed. Developed through improvisation and serendipity, the ensemble can today be read in a variety of ways. It is the nexus of town life; it remains a commemoration of a now obscure event. But for the contemplative visitor, the constant play of light and shadow over the sculptures' forms can be understood as a magnificent metaphor for the passing days and nights of a person's life, from the ritual feasting table, through the portal of maturity to the column of eternity -- a celebration of life itself.