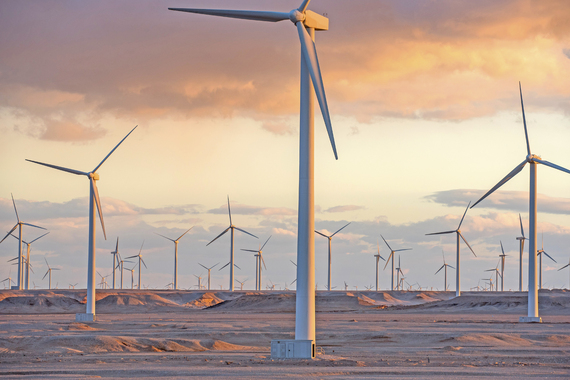 Africa's energy revolution, one of the biggest overlooked stories of our time, is poised to change the lives of millions of Africans.

Why has it been overlooked? Coverage of Africa has tended to focus on disasters, coups and terrorism - or on swings in the price of oil and metals. These events have happened. But they do not define Africa. What defines modern Africa is the steady, remarkable progress it has been making for the past 15 years.

Today, on Africa Day, let's celebrate that progress - and the entrepreneurial spirit that is not only applying the latest technology to African contexts, but also generating new ideas and new techniques that can benefit the world.

The best-known example is Africa's "leapfrogging" directly to mobile phones, bypassing landline connections and using mobiles to move money, consult farm prices and much more. The number of mobile phone subscriptions per 100 people soared from 18 in 2006 to 71 in 2014.

A less well-known example is Africa's embrace of renewable energy to leapfrog older power generation technologies, while also reducing the need to extend the national energy grid to remote villages.

From an African perspective, renewable energy technologies such as solar and wind power, have two powerful advantages: speed and decentralisation. They can be rolled out much more quickly than fossil fuel-fired power plants, and they can operate both on-grid and off-grid.

Small-scale renewable energy is starting to deliver the social and economic advantages of electrification to rural communities, helping improve public health, enabling access to education, and opening up economic possibilities to a continent of entrepreneurs.

Renewable energy systems will soon be able to cater to the most intensive and heavy demands of industry and other productive sectors. Kenya, for example, is a leading global producer of geothermal power. Its Olkaria plant is the biggest single-turbine geothermal facility in the world. In Ethiopia, the 1,870 MW Gibe III hydroelectric project has begun generation, and the Grand Ethiopian Renaissance Dam is expected to generate 6,000 MW at full capacity when it is completed in 2017.

The most stunning example of Africa's embrace of renewable energy is the Ouarzazate complex in Morocco, which will be the world's biggest solar facility.

Swift action on energy is vital, because Africa's energy gap is huge, and bridging it is urgent. Two-thirds of Africans - 621 million people - live without access to electricity. Cut off from the grid, the world's poorest people pay the world's highest power prices. A woman in a rural village in northern Nigeria spends 60 to 80 times more per unit of energy than a resident of London or New York. This is a huge market failure.

The lack of modern energy also means that almost four in five Africans rely for cooking on wood, charcoal or other solid organic fuels. As a result, 600,000 people in the region die each year from household air pollution.

Luckily, momentum is building across the continent and the world to support African countries reach the global goal of universal access to electricity by 2030 -- an effort that will require US$55 billion a year.

The African Development Bank (AfDB), a major player on the continent, has made energy access one of its top priorities, and has launched an initiative called the New Deal for Energy in Africa. Many European governments, including France, Germany and the United Kingdom, are on board too.

This week the AfBD is holding its Annual Meetings in Lusaka, Zambia. The Africa Progress Panel, The Elders, The B Team, and the AfDB, have co-organized a High Level Side Event which takes place today at 16:30 (GMT +2). The side event, which is entitled Africa's Energy: What's the New Deal?, will focus on how Africa can achieve universal access to power by 2025. Kofi Annan, the Chair of the APP and "Champion" of the New Deal, will be providing the opening remarks.

The Paris Agreement, reached at the global climate talks last December, has added to the momentum by underscoring the need for governments around the world to address the twin challenge of decarbonising energy systems while delivering energy for all.

Major emitting countries should put in place a credible carbon pricing and taxation system, instead of spending billions on fossil-fuel subsidies.

Across the African continent, energy entrepreneurs are vividly showing Africa's potential to leapfrog to a low carbon economy. An enabling environment must now be created to allow this growing pool of energy investors with innovative business models to thrive and reach new consumers.

Africa's leaders must also rise to the challenge. They need to move more decisively to tackle vested interests and break up webs of political patronage in Africa's energy utilities. They should also end subsidies to wasteful utilities, vehicle fuel and kerosene. These funds should be spent instead on productive energy investment, social protection and targeted electricity connectivity for the poor.

As a global community, we have the technology, finance and ingenuity to embark on a low-carbon transition that brings the benefits of modern energy to even the remotest village. There is no time to waste -- let's start now.