Today, the 21st of October, 2015, is "Back to the Future Day." While it's not a bank holiday, the McFly faithful know it's the date to which fictional everyhipster Marty McFly, manic Doc Brown, and (to a limited narrative extent), Marty's girlfriend Jennifer Parker swooped via "jigawatt"-slurping DeLorean time machine in the highly successful movie Back to the Future Part II (1989), itself the sequel to the pop-culture juggernaut Back to the Future (1985). Count on "hoverboards" trending big-time, but obviously the future that has finally become the present doesn't match the movie note for note (though really, Sharknado 3 might as well be Jaws 19).

The official line on Back to the Future's origin states that co-writer Bob Gale was visiting his native Missouri, found his father's high school yearbook, and wondered if he'd have befriended him as a teen. It's true also that, concurrently, Missouri author and teacher Bernal C. Payne was writing his sci-fi novel It's About Time (later retitled Trapped in Time), publishing it in 1984; Amazon description: "A teenage brother and sister are transported back in time to 1955 when their own parents were teenagers." Must be something in that Show-Me State air! Of course, back then we as a species were barely digital, but imaginations were open and time travel was hot, from Somewhere in Time (1980) to The Final Countdown (1980), from Terry Gilliam's masterpiece, Time Bandits (1981), to Doctor Who on telly, which was still in its first run, long before many of today's hardcore Whovians were born.

But still, Back to the Future flashed into pop prominence like lightning in a bottle (or in a DeLorean), and few modern Hollywood films of any genre have proven as enduring and warmly embraced (except perhaps by Libyans). Much like The Goonies (also summer, '85), Back to the Future is Spielbergian perfection (the master of movies exec-produced both films with Hollywood powerhouses Kathleen Kennedy and Frank Marshall), albeit with directing credit firmly going to Robert Zemeckis, who co-wrote with Gale and delivered unto us a suburban sci-fi classic. Back to the Future has something for everybody, slapstick and romance, vintage rock & roll and highly prescient geek culture, plus its tour de force of blatant brand placement never upstages its family-friendly incest gags. One marvels. 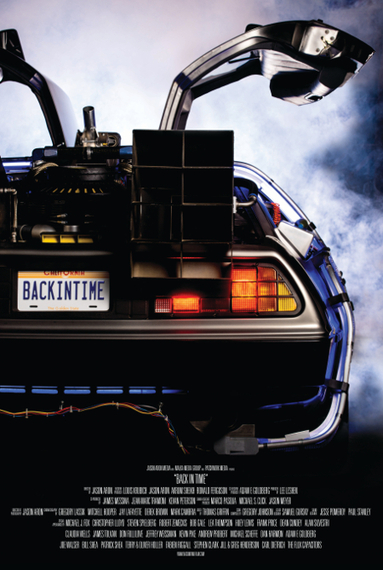 The brand-new documentary Back in Time gets to the heart of the Back to the Future phenomenon, proving as enjoyable as the franchise it affectionately explores -- no mean feat for a doc! Director Jason Aron and his crew have done a phenomenal job getting the aforementioned big boys to open up in front of their cameras, as well as a stunning spectrum of talent: Lea Thompson, Claudia Wells, cinematographer Dean Cundey, Donald "Mayor Goldie" Fullilove, plus Doc Brown and Marty themselves: Christopher Lloyd and Michael J. Fox (you'll be grinning at their asides). As for that epic soundtrack, rocker Huey Lewis and composer Alan Silvestri show up, as well as a host of Hill Valley girls and boys who've been keeping the inspiration alive for causes recreational, scientific, and philanthropic, far from the Hollywood searchlights. Back in Time is delightful return to, and updating of, a beloved story. 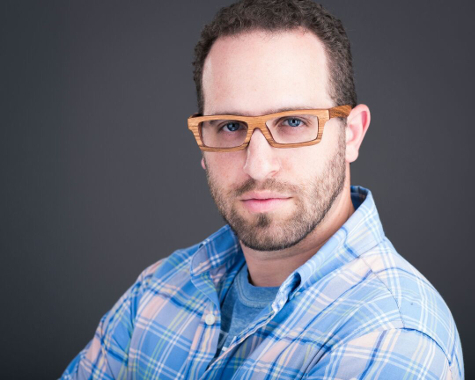 Back in Time director Jason Aron

It was my pleasure to speak with director Jason Aron, who notes that it took about two and a half years, from initial Kickstarter launch in April of 2013, to the finished documentary we have today.

"The project shifted gears," Jason launches with a nice pun, "because originally it was going to have a very heavy focus on the DeLorean -- and you can see that in a lot of the vignettes -- but it shifted when we started getting the cast and crew, like, how can we not tell the whole story?"

I ask Jason what the Back to the Future phenomenon means to him.

"I think the movie appeals on a global level the way it does because the story is so simple. It's about the kid next door, who lived the most normal life, who got to go on this amazing ride. I think it's very relatable. The characters are so well thought out. Even if you didn't want to be Marty McFly, you still have Doc Brown, whom a lot of people can relate to, or George McFly, sort of that outcast who gets it together. You have that perfect bully in Biff, and high school sweetheart in Lorraine. Every character is relatable to someone." 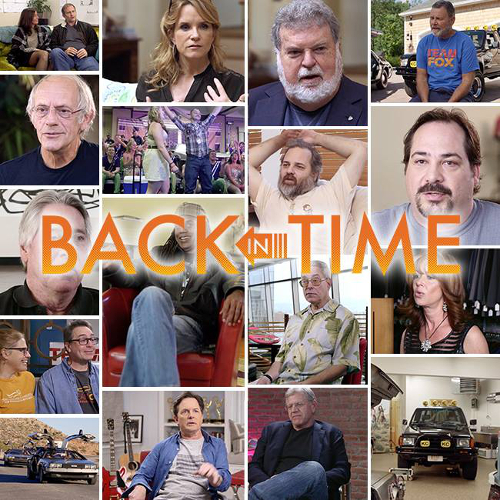 As a teen, I was the absolute target audience, but I note that Jason was quite small in 1985.

"Yes, I was two years old," he laughs, adding the slightly later memory, "I remember being in third or fourth grade, and bringing my first Sony recorder to school, sitting with a friend of mine, and just running Back to the Future, line by line. We had the whole movie memorized. As much as I love films, most movies I can see once, and never think of them again. Back to the Future, at this point, I've seen no less than a hundred times. I'm probably not giving it enough credit -- it's probably been a lot more. Something about it stuck with me. I love technology. As a kid, Back to the Future Part II was my favorite movie by far."

Did developing this doc yield revelations?

"We had a great opportunity to sit down with Frank Price, the legendary studio head at both Columbia and Universal. He told us the great story about how he had acquired the rights from Columbia, because originally he had signed the Bobs [Gale, Zemeckis] to the original writing deal when he was there at Columbia. Hearing that story, it was something I had never read in Back to the Future folklore. We went on to find out that he had never told that story to anyone, so when we told that story to Bob Gale, he himself didn't even know it. It's great to know that after 30 years, we could bring the fans a new Back to the Future story. That was one of our concerns: Hasn't everything been said already?" 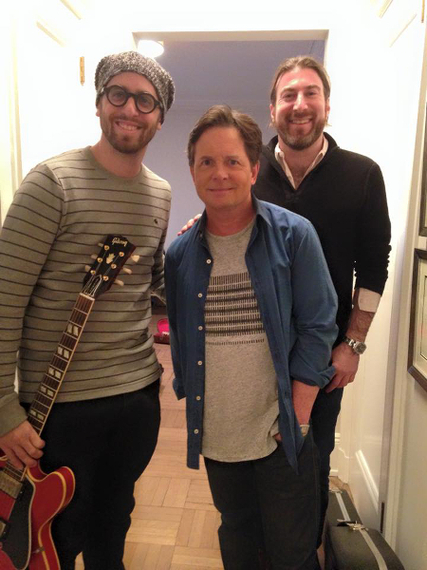 On the scene with Marty himself!

Viewing Back in Time, one senses the freshness, perhaps most with Michael J. Fox, who warmly recounts his experiences -- including enduring the London premiere with a full bladder: seated next to Lady Diana! ("She was smokin' hot," respectfully reflects the master thespian.)

"That was one of the moments on set," Jason reveals, chuckling, "where everyone in the room was trying to hold that extra beat before we burst out laughing!"

I ask about homespun, philanthropic time-machine builders Terry and Oliver Holler , and how Jason found them.

"They were some of the first people we did find. They're out there, they're connected. Back to the Future dot-com sponsors a lot of their efforts, so we knew about them very early on. Between the Sheas -- who have the greatest Back to the Future collection ever, and do a lot for charity as well -- and the Hollers, who have devoted their lives to raising money for the Michael J. Fox Foundation [for Parkinson's Research], those two are the foundation for this entire documentary." 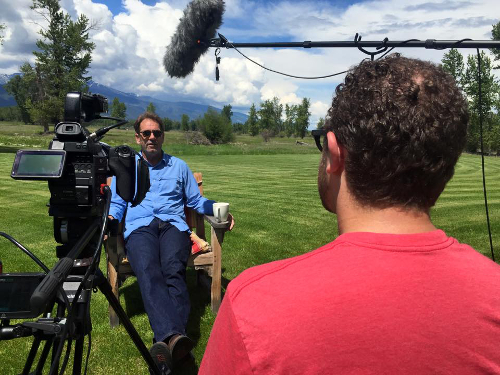 Tougher than diamonds; stronger than steel...

I must ask: How 'bout that Huey Lewis? And Alan Silvestri?

"I've been involved with music my whole life," notes Jason, "and those two guys, we just connected. Alan is actually from my home town -- which I did not know until this process. We totally bonded over that. We're still in touch. He and I both fly RC helicopters.

"Huey, also. One of the most laid back -- he has this persona like he's just this cool guy: Huey Lewis -- but it's even more true in real life! He left us in his house -- he had to go pick up his car: 'Yeah, guys, just finish packing up. Don't worry about it.' Those two guys: two huge pieces of the film." 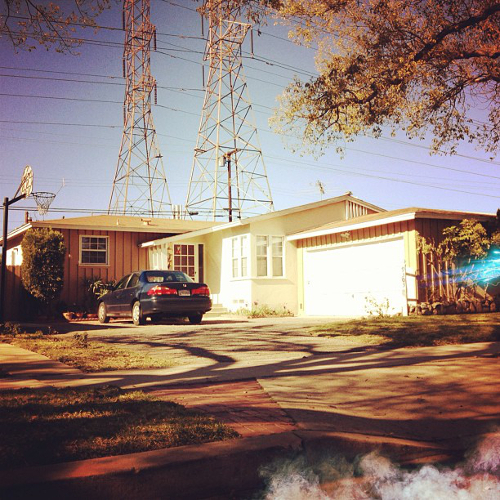 Back in Time also happens to be a Kickstarter success story.

"Our original goal was $43,000, and I think that we felt we'd be hard pressed to get there," admits Jason. "But we did. And then the second Kickstarter -- I don't want to call it a foregone conclusion, but at that point we'd worked so hard -- we went from a video with [DeLorean aficionado] Bill Shea and his son to a video with Michael J. Fox and Robert Zemeckis and Christopher Lloyd and Bob Gale and Claudia Wells -- the list goes on. Really our second Kickstarter was this very polished trailer, whereas our first trailer was just kind of a shot in the dark." 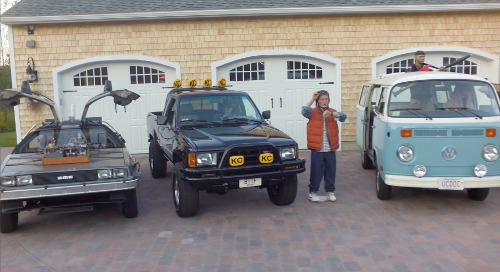 So you think you have a cool collection. Meet the Sheas.

Asked about his inspiration to get into features, Jason -- a pro in the commercial world -- draws a deep breath and says, "This was definitely, definitely, definitely a learning experience," adding of his fine crew, "We knew we were in the right hands." Receiving praise for Back in Time's technical polish, he laughs and draws a parallel: "I love gear. Robert Zemeckis is a big gear guy, too -- especially in Back to the Future Part II, pushing the envelope in terms of what was available at that time. And this is a great testament to what you can do in 2015."

Indeed! While there are loads of docs devoted to fave franchises (heck, I'm in two Star Wars ones, if you don't blink), Back in Time is really special: smart and candid, heartfelt and inspiring, and as fun as visiting old friends you actually like. So check it out on your choice of platform or public screening, -- you won't be disappointed. Meanwhile, in lieu of money and fame, I'll continue striving to ride that train for which one don't need no credit card. 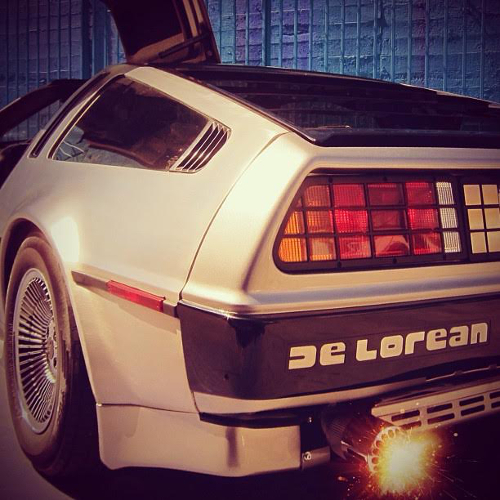 The car at the core
photo by Jeff Beard

Images and clips courtesy of Jason Aron Media unless noted.