The holidays are a time of celebration, of family, of homecomings. Every November and December, when our sons come home from college, I watch my wife redouble her efforts to ensure we are comfortable. And that got me thinking about those who do this on an everyday basis.

In World War II, four percent of those who fought came home wounded. Fast forward seventy years, when surveys report that 16 percent of post-9/11 veterans were seriously wounded defending their country. This means that many more service members are coming home with injuries that require care, returning to young spouses and parents who were not planning to become caregivers.

I learned much of this information last month at the Rosalynn Carter Institute's National Summit & Training Institute, hosted for two days by former first lady Rosalynn Carter and attended by nearly 150 caregivers, including more than a dozen Elizabeth Dole Fellows, and representatives from caregiving support agencies. There was so much good content at the conference and remarkable attention paid to military caregivers, with a special call out to them in a video greeting from First Lady Michelle Obama. 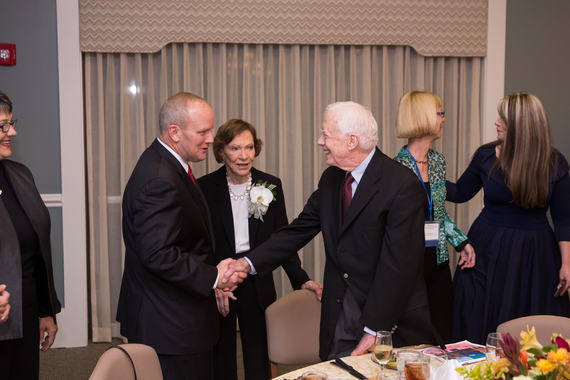 More than just a conference, this event was a melding of purpose, direction and motivation, designed to inform and inspire influencers in the world of caregiving who can carry that message far and wide. And that audience is immense. A 2014 Rand Corporation report funded by the Elizabeth Dole Foundation estimates that there are 5.5 million military and veteran caregivers in the United States.

This audience is also not who you might typically envision, as the demographics of military caregivers have shifted. According RCI, more than half are either spouses or parents -- not paid caregivers. Almost 40 percent are under age 30. And while more than 60 percent have jobs outside the home, making caregiving a second career, another one-third gave up their job to provide care.

Sadly, more than half of caregivers report to RCI that they do not have a support network, which is where Operation Family Caregiver comes in. OFC provides free one-on-one training to military caregivers, teaching problem-solving techniques that will help them long after the RCI coaches are gone. It is tailored specifically to the struggles of each family, teaching participants the skills needed to best navigate their personal challenges. By the beginning of 2016, OFC will be serving military families in 12 locations -- and it also assists caregivers anywhere in the world via Skype.

Those who end up caring for injured service members and veterans often are so busy taking care of their families that they don't always take care of themselves. They are more likely to be depressed, exhausted, and have more physical health problems, including a greater risk of heart disease and stroke. But if caregivers can just get a little help managing the stress that comes with caregiving, a lot of these problems go away. The evidence-based OFC program has shown that after participants complete OFC, caregivers are less depressed and reporter fewer health problems, which children are less anxious.

In a column earlier this year, I called out programs that support caregivers and lauded the Rand report that defined military caregivers as "hidden heroes." That couldn't be more true. That's why today's column is dedicated to my wife, the greatest caregiver I know.