Growing up in Long Island, she grew to love and study the salt marsh flora. While in high school and later in college, she taught in a summer program about the area's marine and shore systems for elementary school children and teachers.

These days, as an environmentalist and religious woman, she has worked to bring God and Nature together to promote what she calls "eco-spirituality."

Eco-spirituality is about helping people experience "the holy" in the natural world and to recognize their relationship as human beings to all creation, she said.

However, eco-spirituality isn't just a philosophy or a prayerful way of life. For Sister Ginny, it has been a passionate call to action. 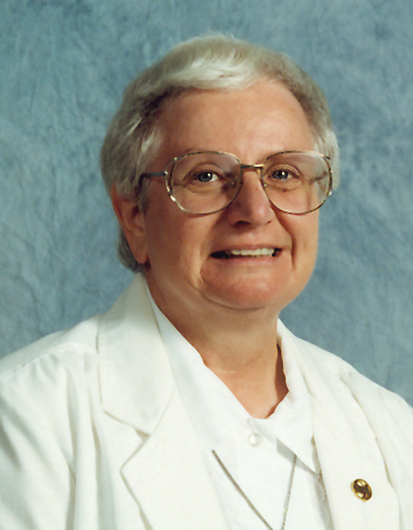 After she joined the Sisters of St. Joseph in 1968, Sister Ginny served as an environmental science instructor at Nazareth College (near Kalamazoo, Michigan).

"During that first Earth Day event tours were held and visits were made to a number of 'polluted' sites around the city, many of which are now designated as super fund sites," she said. "The water in Portage Creek was almost white in color and although we did not know exactly what was wrong, it was clear that something was very wrong."

However, as a woman of deep faith and big ideas, Sister Ginny had her eye on a 60-acre pristine stream and wetland located in a valley on the Nazareth property. In 1973, armed with a bulldozer and several students from the College, she created a hands-on classroom project where they built a pathway leading into the valley, mapped out trails and planted trees. They turned the land into the Bow in the Clouds Preserve, which traverses a pristine stream and wetland. Later on, several Boy Scouts added a 1,000-foot boardwalk system as part of their Eagle Scout badge project.

The name of the preserve comes from the Bible (Genesis 9:13) where God set a "bow in the clouds" as a sign of the new covenant between Him and the Earth.

Sister Ginny has been the preserve's lead caretaker, however in July 2007 after several years of negotiations, the Congregation of St. Joseph transferred Bow in the Clouds to the Southwest Michigan Land Conservancy, which protects the preserve and its natural qualities from development in perpetuity.

"We want the public to use it for what we call 're-creation,'" said Sr. Ginny. "We know many people today are separated from religious tradition, and we respect that. We also know that before formal religion existed, people encountered something of the holy in the natural world. And that something--that peace, solitude and wisdom--is what we believe people can still find here."

On the side, Sister Ginny taught environmental studies for Western Michigan University and Sienna Heights University; she also planned, coordinated, and directed many environmental activities including local and statewide conferences on Christianity and ecology.

One of the outgrowths of this work is Sister Ginny's latest and most ambitious project: the Manitou Arbor Ecovillage.

"We are forming a community of people who want to demonstrate how to live with the natural environment," said Sister Ginny.

Manitou Arbor is an "intentional community," part of a worldwide trend where people come together to share responsibilities and resources, witness a common vision and create an alternative society. Ecovillages typically have a particular focus. Manitou Arbor's is one of sustainability, community and spirituality, which is reflected in its name.

"Manitou" is the native peoples' term for Spirit where they believed in the inter-relationship of humanity and Nature, spirit and matter, the individual and the cosmos and the care for the Earth and each other. "Arbor" means tree. It is an archetypal symbol where its roots spread deep into the body of Mother Earth and its branches reach upward like praying hands.

The ecovillage will sit on 40 acres organized in an oval. Four "apartment-style" units, which are connected to the community center building, are planned as well as 50 detached single family or duplex units that will use a variety of earth-friendly as well as energy- and material-efficient construction techniques.

Sister Ginny and a team of ecovillage founders are also exploring residents' access to the adjacent 230 acres that is home for a diverse wildlife community in a mature forest of hardwoods and conifer trees with a creek, wooded paths leading to a lake and agricultural fields open to organic and/or biodynamic farming.

"I would really like to see Earth Day become the kind of consciousness that focuses on our relationship to the natural world and to this Earth that we all live on," she said. "It reminds us of how much we benefit from a healthy planet and how much we can do to make it healthier for the benefit of all of us."

The early 1970s was a heady time when the nation turned its focus on the environment. Publication of Rachel Carson's New York Times bestseller "Silent Spring" in 1962 represented a watershed moment in public awareness and concern for living organisms, the environment and public health.

At the time, Americans drove huge, gas-guzzling V8 sedans, industry belched out smoke and sludge and people accepted air pollution as the smell of prosperity.

With the help of Rep. Pete McCloskey (R-California), Senator Nelson announced the idea for a "national teach-in on the environment" with Denis Hayes, an environmental activist and proponent of solar power, as coordinator for the first Earth Day.

Earth Day1970 achieved rare political of support among Democrats and Republicans, rich and poor, urban and rural dwellers, industrialists and labor leaders. Then, 20 million Americans took to the streets, parks, and auditoriums across the country to demonstrate for a healthy, sustainable environment.

The first Earth Day led to the passage of the Clean Air, Clean Water, and Endangered Species Acts and the creation of the United States Environmental Protection Agency.

Author, "Heroes of a Different Stripe: How One Town Responded to the War in Iraq".