It was dusk -- winter dusk. Snow lay white and shining over the pleated hills, and icicles hung from the forest trees. Snow lay piled on the dark road across Willoughby Wold, but from dawn men had been clearing it with brooms and shovels. There were hundreds of them at work, wrapped in sacking because of the bitter cold, and keeping together in groups for fear of the wolves, grown savage and reckless from hunger.

So begins Joan Aiken's wonderful The Wolves of Willoughby Chase which is celebrating its 50th birthday this year. I first came across it when I was twelve, browsing the shelves at Foyles, London's legendary bookstore, and fell for it hard, reading it many times over the years. A grand adventure with wonderfully spunky characters set in an alternate Victorian world, I reread it recently and can say that it is as marvelous as ever.

At 7 PM this Friday, October 26th, the anniversary will be celebrated at New York City's Bank Street College with a panel moderated by children's lit scholar Michael Patrick Hearn featuring Betsy Bird and Aiken's longtime agent Charles Schlessiger among others as well as a multimedia presentation and reading by Lizza Aiken, Joan's daughter and a professional actress.

Horn Book editor Martha Parravano is raving about the new audio book narrated by Lizza (for a taste go here) and AudioFile thought highly enough of it to give it their  2012 Earphone's award.  For some recent appreciations of the book check out Michael Dirda's Washington Post piece, this one with the great suggestion that Peter Jackson turn it into a movie, and this post by a children's librarian who first read and loved the book as an adult.

It still is a hit among kids today, boys and girls alike. One 6th grader I gave it to recently concluded that it was "...an exciting story about bravery, loyalty, and friendship."  A 5th grader commented that it was  "...a suspenseful adventure that I could not put down! It was a fun and exciting read, some parts were sad and scary, other parts made me laugh. I thought it was a great book." And another 6th grader noted that "....this is a book with some humor, adventure, and a great ending. I recommend this book 100%."

This past August I visited Lizza in her lovely London home. At the bottom of her garden she has an enchanting small structure build in the style of a Cape Cod house (honoring her grandfather, the American writer Conrad Aiken) that she has turned into a Joan Aiken museum. And so to end, here are a few images from that amazing place. 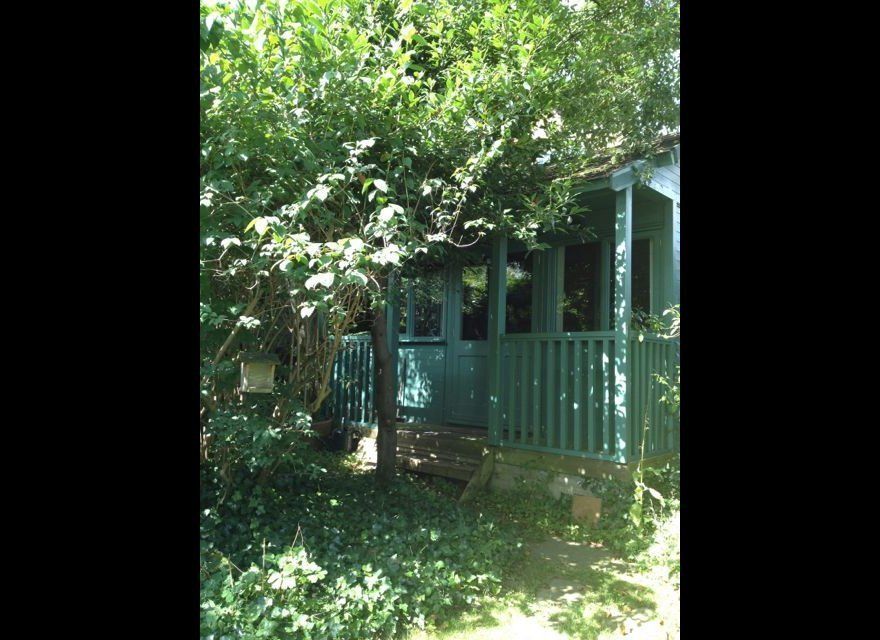