Climbing the Great Wall for Friendship

According to proclamations of both President Obama and Chinese President Xi, 2016 has been declared the China-US Tourism Year. In 2015 just over two million American tourists visited China, and by offering favorable visa policies and promoting attractions, the Chinese are aiming to boost that number. To launch the program, in March the country hosted "1000 Americans Visiting the Great Wall." I was among the delegation that journeyed to China to take part in the ceremony. 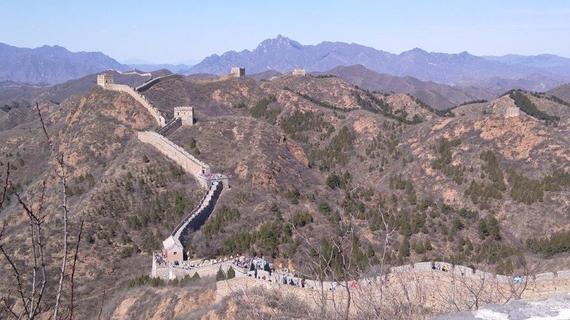 Dancers with a bright yellow dragon cavorted in front of us under a clear blue sky partway up a mountain in Janshanling about a two hour bus ride northeast of Beijing. Delegates from New York, New Jersey, Minnesota, Nebraska, Georgia, Florida, Nebraska, Iowa, California bought into special tours arranged to launch and commemorate the attractions and opportunities China offers to visitors from overseas. We were outfitted in white caps, tee shirts and backpacks (pink for the women; blue for the men) and were brought by bus to this section of the Great Wall that is about 200 miles from where it initiates in Shanhaiguan on the Yellow Sea before running 5500 miles west to Gansu. 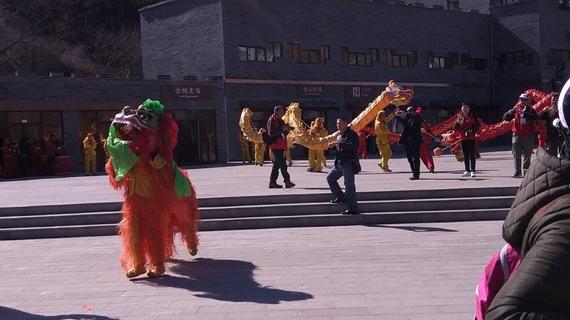 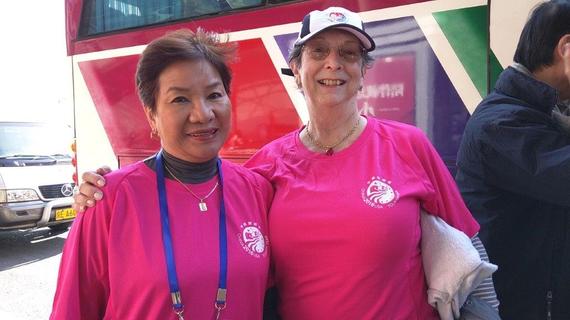 Disembarking from the buses we walked past dancers and vendors charging $5 for hiking poles to complement the hardy footwear that had been recommended for hiking this popular six-mile stretch section of the Great Wall which includes 67 watchtowers, five passes, three beacon towers. The park entrance features a handsome two-story tourist center and attractive stone souvenir stands around a large plaza which was sun lit and bright. As we ascended past crenellated fences lining the paved stone walkways, signs advised us to be friendly to grass and leave only footprints behind. 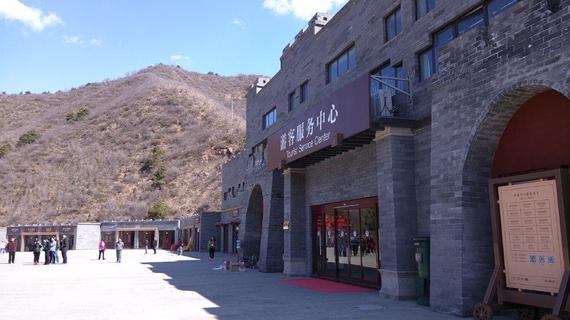 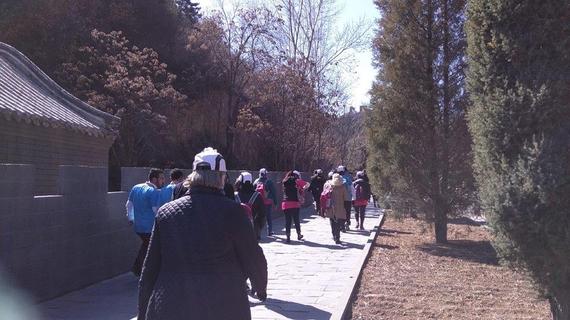 Climbers set off toward the Wall 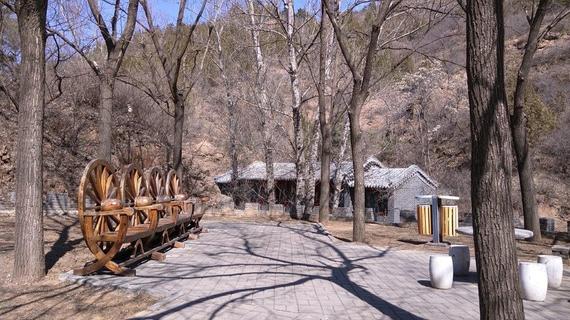 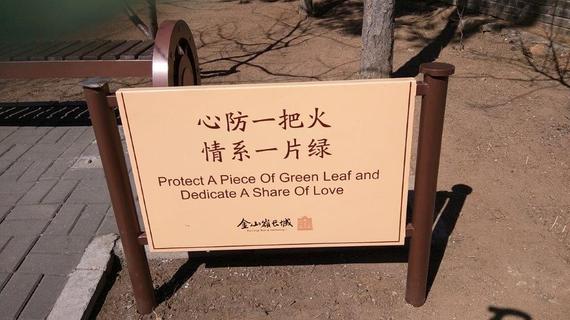 Partway uphill we assembled on a platform where we watched dancers perform local Mongolian folk dances until we were greeted by the Mayor of nearby Chengde who introduced over a dozen dignitaries who had assembled from various US and Chinese government agencies. Van Houston, Commercial Office of the US Embassy, had driven out from Beijing to greet the American guests and to remind the Chinese audience that in this this centennial year of the National Park Service, overseas travelers to the US can be rewarded by exploring beauties of America beyond merely visiting the major cities. 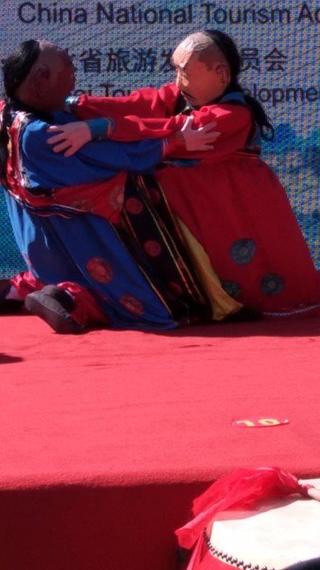 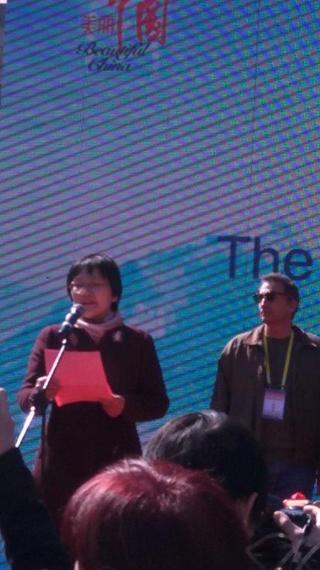 The Mayor of Chengde welcomed climbers 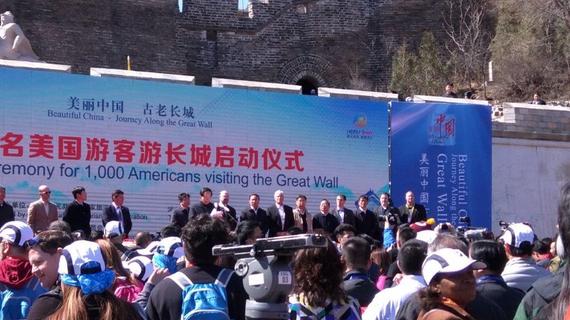 
After peppy American ice dancing gold medalist Olympians Meryl Davis and Charlie White led us in stretches, jumping jacks, and other warm up exercises, it was time to start the trek uphill. The path varied from slight slopes and low steps to stairs which required a bit of effort, but it was a pleasant walk overall. Young Chinese students in aqua tee shirts were are stationed all along the way to point out directions and give a hand on the steeper sections. Intermittently we encountered musicians and dancers in colorful costumes who were stationed along the path to play flutes and dulcimers and pose for souvenir photos. We could stop at "service stations" to be fortified with mango juice and water, cookies and layer cakes. 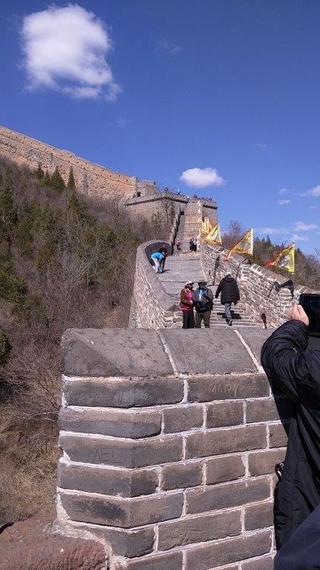 Setting off on the uphill climb 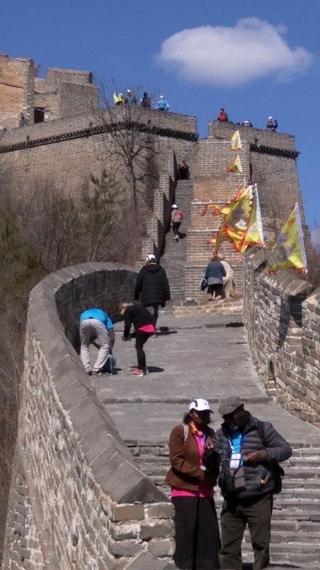 A gently sloping section of the wall 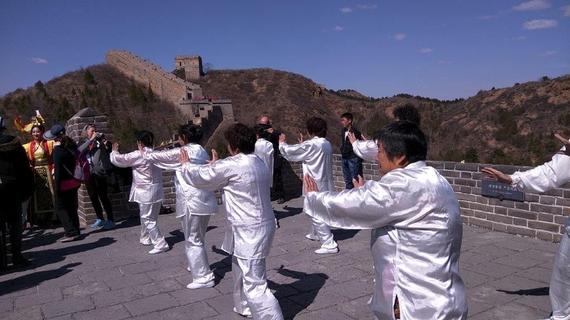 Dancers were stationed to entertain the climbers

Beautiful viewpoints extend from the Wall

Halfway along, the Mayor passed me striding along in sensible high heel shoes and when we reached the top she was waiting there to hand out the Hero Certificates we received for completing the circuit. A"shortcut" transverse path led us back down the hill. 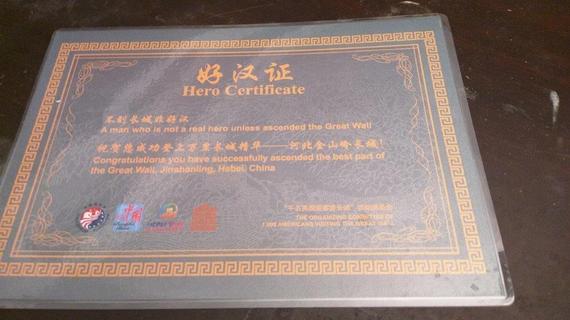 While the wall was never successful as a fortress (Presidential candidates take note) it is one of China's extraordinary historic achievements. Climbing along one of the genuine wonders of the world is an ideal introduction to China's rich topography, history, breadth, and hospitality..