In 1993, musician/arranger/producer/composer Joe McGinty (his credits include the Psychedelic Furs, Robert Hazard, Ryan Adams, Martha Wainwright, Jesse Malin, the Ramones, as well as a number of theatrical productions), came up with an idea to showcase an evening of 'soft rock' classics with a posse of his musician friends. That evening grew into an homage to the music of Burt Bacharach with a backing band and a number of guest vocalists. McGinty called it The Loser's Lounge. "We're not saying that the people we're paying homage to are losers...it's a place that anybody can hang out who aren't VIP's. It started out as sort of the ne'er-do-wells from downtown," he reminisced. He hails from Atlantic City where the billboards along the highways blare slogans like "High Rollers Club" and "Winners Circle." "...So I thought, well, The Loser's Lounge is where the losers can hang out, you know - it's a place where you can go and celebrate a band like ABBA and not feel embarrassed about it...almost like a guilty pleasure."

From the very first show two decades ago that McGinty and his gang presented, the audiences have packed in night after night to see and enjoy these tribute evenings to artists both well known and on the more obscure side. They've paid loving tribute to over 50 different artists ranging from ABBA to the Zombies with plenty in between - Prince, the Mamas and Papas, the Jacksons, Elvis Costello, Carole King, Queen, the Bee Gees, Dolly Parton, XTC, Donna Summer, John Lennon, and many others.

Next week (December 12 - 14) McGinty and the Loser's Lounge will celebrate their twentieth year of bringing these catalogues to life before thrilled audiences. For this event, they've chosen the work of Harry Nilsson, who rarely performed live and in fact never toured, but authored some of the most acclaimed songs in music. "Harry Nilsson is one of the all time favorite Loser's Lounge shows," said McGinty. "We haven't honored Harry since 2000, and so a reprise of his tribute is long overdue. His amazing catalog, with so many great songs, both well known and obscure, make for a great night at Loser's Lounge." 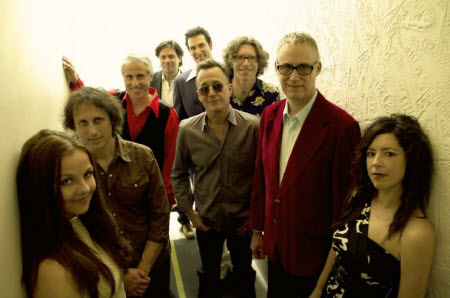 The Loser's Lounge (Used With Permission)

McGinty first came up with the original idea for The Loser's Lounge back in 1993, when he was performing with Nick Danger (a Loser's Lounge mainstay and favorite guest singer) at the Pink Pony. He remembers being extremely surprised that the first show they did was really packed at Fez, a club that closed years ago in the Village. The production then moved to Joe's Pub where it has stayed and built a loyal following since 2005. At first, he recalled, the thought was, "as long as people keep coming let's just keep doing it, and it has evolved. At first we were just doing one week night and then they moved us to a weekend and then we would do two weekend shows and then two weekends in a row, to the point where we now do five shows over three nights at Joe's Pub."

I asked Joe how he decides which artists to feature. "It's tricky because there are some artists that just fall perfectly into the category, like Burt Bacharach or the Beach Boys...One thing is enough of a catalogue to fill out an entire show and also something that will fill the seats for five nights, and that's sometimes hard to tell. It's great that we do five shows at Joe's Pub but it's also a huge operation. We've got a large backup band with backup singers, strings, and horns. So we definitely have to make sure that we sell tickets to be able to pay everybody so it's kind of hard to do the obscure artists now like the Lee Hazelwoods or even to an extent Serge Gainsbourg. It has to be that good balance of something that's fun and slightly left of center but still popular enough to have people show up and come to the show."

The result of which, I can attest personally, is that this group of New York City performers who hail from a number of disparate show business genres, always present a night that pleases both the casual music fan and those who enjoy the more unusual selections. To illustrate, their most recent performance prior to the Nilsson show next week showcased John Lennon's vast catalogue. McGinty and his cohorts focused mostly on Lennon's solo work, but also brilliantly threw in "John, You Went Too Far This Time" which was released in 1968 by actress Sissy Spacek under the pseudonym Rainbo.

The evenings are anchored by David Terhune's redoubtable Kustard Kings, who have been involved since the second year of Loser's Lounge shows. Each night features a plethora of guest singers, some of them with Tony Awards under their belts, and one of the best aspects of the shows for me has always been that, along with the unabashed love they obviously have for whichever artist they are feting that particular night, the attention to detail in period dress and choreography by the performers. "There's always a fun aspect to it and kind of a community aspect," says McGinty. "We don't try to be reverent like some other tribute shows around town; we're not making fun of the music, we're having fun with it, we're doing it out of love. We love the songs and we spend a lot of time trying to figure out the arrangements from the records and trying to reproduce them as best we can with a ten piece band."

Over the past twenty years, I asked Joe, were there any shows that stood out as particular favorites? He mentioned both Paul Williams and Lee Hazelwood, both of whom actually attended the shows they were being tributed in. Paul Williams actually got up and sang at the end, "it was just such an honor and he was such a great guy." Hazelwood, who was known to be a recluse and rather unfriendly, did not perform but "made a very sweet but slightly awkward speech at the end. It was great and I think if I had to pick two, those were my favorites. But they all have their special moments."

So come one come all, enjoy the great musical catalogue of Harry Nilsson next week with McGinty and his friends and raise a glass to the second decade of these wonderful shows. The Joe's Pub nights usually sell out way in advance, so it's advisable to grab your tickets soon.