We're halfway through Women's History Month and since no one has mentioned any Martian females of historical significance, I'd like to recognize a few who exemplify "character, courage and commitment," this year's theme as chosen by the national women's history project.

It's likely you've never heard these names. Perhaps you have no knowledge of their substantial accomplishments, reason enough for me to write this, and for you to keep reading. 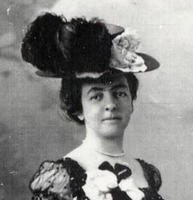 Among the first women to seriously study Mars through a telescope and most certainly the first to call herself a "Martian" was Wrexie Louise Leonard, largely unsung secretary to maverick astronomer Percival Lowell. When she first observed Mars through Lowell Observatory's brand-new Clark telescope in 1896, she declared herself a Martian and never looked back.

In the 20 years she spent working for Lowell, Wrexie Leonard had ample opportunities to observe the red planet, the object of her boss's obsession. Her initials appear often in the Observatory viewing logs and she published her drawings of Mars in the August/September 1907 issue of Popular Astronomy.

She was doing all this at least a half a century before women were allowed a peek through big telescopes at major observatories.

Back before H.G. Wells invented those nasty Martians who landed and ran amok throughout the New Jersey countryside, a little-known utopian novel published in 1893 presented the natives of the red planet as more refined and much less combatant. There was a reason for this: on Mars, the women were in charge.

In Unveiling a Parallel, authored by "two women of the west" (later identified as Alice Ilgenfrist Jones and Ella Merchant), a privileged and unprogressive young man travels from Earth to the red planet, where he is amazed to find that female Marsians (the word Martian had not yet been coined) run the government and financial institutions and in all situations are equal to or superior to men. The Marsians, aghast that females on Earth do not the same power and privileges in their society, engage the male Earthling in lengthy dialogues in which he must continually defend the indefensible behavior of the men toward the women on his native planet.

The novel's most interesting twist is that the all-powerful female Marsians also get drunk, join fight clubs, tell risqué stories, have lovers, employ prostitutes and bear illegitimate babies. They are male Earthlings who have switched gender and planets!

Written as social satire designed to invite questions about women's social status on Earth, the novel, unexpertly crafted by almost any literary standard, has fallen into quiet oblivion, but for its futuristic feminist content alone, may still be worth an eye-opening read.

The First Female on Earth to Send a Female to Mars: Donna Shirley, Sojourner Truth 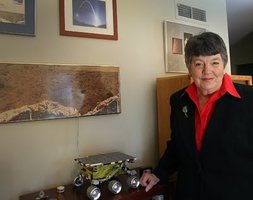 A notable exception to the male-dominated JPL workplace in the earliest years of the space program, Donna Shirley quickly earned a reputation as a woman who had no problem challenging the male hierarchy so prevalent there, and eventually as the woman who sent the first female to Mars.

When Shirley became leader of the team chosen to build the first Mars rover in 1992, a robot about the size of a microwave, most experienced engineers refused to take her design seriously. She received a miniscule budget compared to other missions, spent four years designing and building the rover, and two years campaigning for her rover to hitch a ride on the Mars lander Pathfinder.

Then, in the cheekiest of moves, she declared she wanted this rover to have a woman's name. Shirley spearheaded a contest for students worldwide to submit ideas for names based on female heroines. Twelve-year-old Valerie Ambroise of Bridgeport, Connecticut won the contest by writing:

It's only logical that the Pathfinder be named Sojourner Truth, because she is on a journey to find truths about Mars.

On July 4, 1997, Sojourner rolled onto Mars and spent the next few months relaying data back to Earth. Radio contact was lost on September 27, 1997, but she's still there, the first female to land on Mars, to have a look around, to send messages back home.

Shirley went on to manage all Mars missions (the first female to head a program at NASA) before retiring in 1998. You can read about her laudable exploits in her autobiography Managing Martians.

I found out about these women the hard way: determined research to discover everything I could about women and Mars. I turned up more than 40 astronomers, planetary scientists, engineers, computer programmers, etc. who have made major contributions to our understanding and exploration of Mars, plus the countless more unheralded Martian heroines working in often undervalued support roles whose names have been lost to history. My seminal article on the subject will appear in a comprehensive reference volume, The Encyclopedia of Mars, due out in 2015 by McFarland and Company.

Wrexie Leonard is also a character in my novel Venus on Mars, which will be published this May by Jaded Ibis Press.

The accomplishments of these women have done more than a little to alleviate the traditional and tired Mars persona as warmongering male. This month and every month, let's keep the stories of these trailblazing female Martians alive.