Under the invitation of Nora Guthrie, Jay Farrar, Will Johnson, Anders Parker, and Yim Yames were able to tour the Guthrie archives. Each of the four songwriters were offered the chance to mine the plethora of notebooks, scratch pads, napkins, etc., for anything that might inspire them to lend their voices and give Woody's words new life. Presented here is a HuffPost exclusive video of the track "Careless Reckless Love," one of the results of their labor of love.

New Multitudes, released February 28, 2012, was set to coincide with the centennial celebration of Woody Guthrie's birth year. It is a 12-track release with a 23-track deluxe, limited edition variant. The latter features original Guthrie lyric sheets, an additional 12-tracks, and 11 additional compositions recorded by Farrar and Parker. 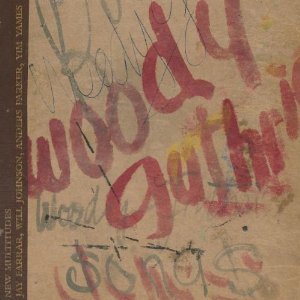 A Conversation With Arlo Guthrie

Mike Ragogna: Arlo, what are your thoughts about your father Woody Guthrie's legacy?

Arlo Guthrie: Well it's interesting because over the last fifty years, the way that we think about him has changed dramatically because of the new material that's been coming out that he wrote the lyrics for. But my dad was not a trained musician, he couldn't read or write music and so whatever tunes he had in his head for the way that these songs ought to sound went with him when he passed away in '67. He recorded about 200 songs, but there's 3,000 of them sitting there. So, my sister, Nora, has been getting these lyrics out to young musicians all over the world.

MR: And we're celebrating his centennial this year.

AG: When you start thinking about the hundred years or so that's gone by, it seems like every decade, there's a different Woody Guthrie. I think we're finally getting to the point where we're getting an image of him for the next hundred years that is very different from how they saw him in any one of the last five decades.

MR: Bruce Springsteen, the keynote speaker at SXSW, had beautiful words to say about Woody.

AG: It was a great speech, it was very good, I was impressed.

MR: Was there anything from that speech that particularly touched you?

AG: I think it was the first time that I had ever seen somebody of that stature be that candid about the songs that impressed him personally and the songs that changed his life. And to conclude it with the idea that the ones that changed his personal life meant one thing, but the ones that inspired him to want to change everybody's life, that change happened as a result of being made familiar with or hearing some of Woody Guthrie's work. That's true for a lot of young musicians, not just him, but to hear somebody of that stature say it meant a lot, personally, to me.

MR: I think for everyone in the audience, thought it was a very special moment. Now, although you are Woody's son, you have your own impressive catalog, and your own legacy as well. I still play your Amigo album to this day, and it's wonderful that "Massachusetts" has even become that state's anthem. My point is that through your music and the opening of the vaults for writers to complete or continue Woody's work, to me, it seems as a kind of cultural and musical torch is being passed along through your bloodline.

AG: I don't know if it's that. If any family believes that royalty was just not an American thing, it would be ours. We kicked out the royals of a couple of hundred years ago for good reason. My father believed that nobody is born with more rights than anybody else and more responsibilities than anybody else. That is the antithesis of the system that allows for royals to exist in the world. Some people believe that they have obligations and they have this and that, that they're born different. Nobody in America is born different and my dad believed that. So the only way that we think of ourselves is as links in a long chain that goes back long before my dad and that will continue long after us. That includes people that are not in the family, and most notably Pete Seeger, who is the one really responsible for us knowing who Woody Guthrie is. It's not so much my dad, it was guys like Pete who kept those songs going throughout the people investigating him for having ideas that were just as American as anybody else's, and for keeping the spirit alive through that generation my father couldn't live through.

MR: Speaking of Pete Seeger and Bruce Springsteen, do you see the spark of what your dad ignited in others' works, or maybe at least in certain genres like folk or singer-songwriter?

AG: Well, I think what's happened is at some point in time, back when everybody started getting electricity and we started getting record players and radios, there arose out of that the opportunity for people to sell music on a national and international scale. So we began to lose the domestic local music that music had been making for years that contained their histories and their stories and what had happened to them, their communities, and their families. Those had been passed down for countless generations and added to a collection that we don't even know who wrote them. Out of that comes this new world, where all of a sudden, the music that's being made has to be dumbed down so that it doesn't offend anybody, anywhere, at any time. That was unlike the old cowboy songs that offended everybody, unlike the old spirituals that were patently protest songs long before we gave it a name.

When we begin to have popular music, you begin to have middle ground, and it took us to change that around. It took individual people, individual companies and individual writers to try to say something that had the same kind of value, because all of a sudden, we're seeing ourselves as a nation that we didn't before. We saw ourselves as this part of the world or that part of the world. You could tell where people were from by the way they spoke, by the way they talked. All of a sudden, we started getting this "oneness" feeling, which is, in some ways, nice but in other ways, very upsetting. So in the different genres that you mentioned, there is still local music. There is still music that doesn't have to talk to everybody, it talks to a certain group of people who understand it, but it doesn't need to be dumbed down enough so that it's not offensive anymore. Those are the kinds of influences that Bruce Springsteen was talking about, that people who were unafraid, those were the ones who impressed him the most. He talked about that. He said he certainly heard the working man song in a popular group and it made him come alive. Like, "Woh, these guys are saying something."

MR: I think he was referring to The Animals' "We've Gotta Get Out Of This Place."

AG: Yeah, The Animals. And it wasn't a slap in the face to The Beatles or something like that, who may have been musically more inventive, but it was a wake-up call that said you could do that. That's happened in hip-hop, that's happened in all kinds of music that is currently going on, because we've lost interest in the national charts, nobody reads them anymore. They are totally irrelevant. That's a great thing. So we've seen it come full circle, we've seen the historic evidence of who we were as individual groups, local groups, southern groups, western groups, mountain groups, and became fairly stupid for a while, fairly innocuous, fairly uneventful. We're back to a time now, where on a larger scale, people can say something again.

MR: Arlo, what advice do you have for new artists?

AG: I don't have any advice that anybody would want to take, but if I had to distill my father's advice, it would be that it's better to fail at being yourself than to succeed at being somebody else.

A Conversation With Colin Gilmore

Mike Ragogna: Colin, what does Woody Guthrie mean to you?

Colin Gilmore: To me, Woody Gutherie was the voice that made having a conscience seem fun. I guess becoming our nation's musical folk hero just came along with the territory. No one could have opened our country's eyes like he did.

MR: What kind of a mark do you think he's left on the culture?

CG: He really set the tone for our musical heritage. If you think about our nation as having a sound track for the last 100 years, it's hard to imagine what it would be like had he not been around. Music could have been all warm fuzzy feelings, or it could have been all boring protest songs, and he made sure we understood that these two views were different limbs of the same body.

MR: Which Woody Guthrie songs do you think have the most resonance these days?

CG: "A Picture From Life's Other Side," "Jesus Christ," "Deportees," "This Land Is Your Land." These are songs about justice and the human spirit. These topics aren't going out of style any time soon.

CG: Recording, writing, traveling, working, searching for inspiration. Just filmed a video for my upcoming album. Trying to play out as much as possible, make new fans and impress the old fans.

CG: There is. This upcoming album will be my third, shooting to have it out later this year. Recording in Chicago and in Austin taking advantage of the digital age, but finding good old-fashioned chemistry with the people I'm recording with.

MR: Colin, what advice do you have for new artists?

CG: Always remember that the love of the music is ultimately what keeps the whole thing going. It's a hard thing to remember because there are times when it feels like promotion and hype are the whole game. If you're truly making music from the heart, you're helping to make it an industry worth saving.

A Family Affair Record Store Day Release from Guthrie Family vs. The Rondos

Sarah -- of Sarah Lee Guthrie & Johnny Irion -- is part of the famous Guthrie family lineage, daughter of Arlo, granddaughter of Woody. She and Johnny have been touring and writing together for years as a couple and as part of "The Guthrie Family Rides Again." The Rondo Brothers, a production team based in San Francisco, are best known for their work with Head Automatica, Dan the Automator and remix projects for the likes of Common, Schwayze, and MC Lars, so hence the uniqueness of this folk meets beats project. Interestingly, Jim Greer -- one half of the Rondo Brothers production team -- grew up surrounded by folk music. His parents were actors on the Hootenanny variety show, so working with folk royalty, Sarah Lee & Johnny, was a dream come true. The result of this collaboration is a sound that has been coined as "beat folk," and the gathering of talent "U.S. Elevator."

The group is releasing a series of EP's throughout the year, mostly covers mixed with some "remixed" versions of Sarah Lee Guthrie and Johnny Irion tracks. The first EP, titled, Valentine (released coincidentally on Valentine's Day) consists of two covers: The Jules Shear-penned "All Through the Night" made famous by Cyndi Lauper and Liz Phair's "Never Said," along with a remixed version of "Looking for You," an outtake from Sarah Lee & Johnny's early 2011 release Bright Examples.

The next EP is going to be a Record Store Day split 7inch that will have their version of Joni Mitchell's "Both Sides Now" and Jim Croce's "Spin Spin Spin."

And here's some music to check out...