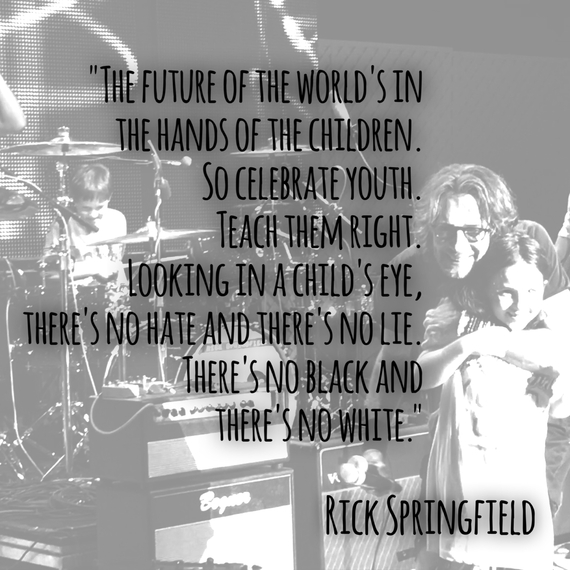 It's 1982. Teen and Tiger Beat posters litter the wall around my record player and the rest of my room. My friends have Ralph Macchio, Matt Dillon, and Rob Lowe (basically everyone from the cast of The Outsiders which was still to come next year). While the rest of the girls were posting a barrage of teen heartthrobs on their walls, mine held only one: Rick Springfield -- Dr. Noah Drake on General Hospital, singer, rocker, renaissance man.

Over thirty years later, my daughter is concentrating intensely on the sign she's making with the new markers she got for her birthday. She turned seven today. This fact leaves a lump in my throat. I'm prone to spontaneous sobbing, especially on special occasions, but I try not to cry as I watch her drawing a rainbow with the sun shining on her barely-freckled face. I want to keep her in the world that exists when you are seven, which is so completely irrational and unreasonable; its impossibility makes my head spin. In the meantime, I try not to get motion-sick. I'm still figuring out how to mother a child very much like myself, a simultaneously frightening and enlightening experience.

For birthdays it isn't unusual for our kids to ask for live concerts instead of tangible gifts. Last year for our daughter, it was Katy Perry and for our son, Justin Timberlake. Music has been an essential part of our daily lives so it is only natural that we have shared that love with our children. When I saw that Rick Springfield was going to be right down the street, I prayed she might want to go. The concert happened to be on her actual birthday so I couldn't tell her I was missing her birthday to go see Rick Springfield if she didn't want to go. She was resistant at first, but my husband assured me, "I've got this," as he cranked Jessie's Girl to full volume in the car. "This is Rick Springfield? I love this song!" she shouted as she went back to singing with the rest of us, all at the top of our lungs.

Over the next week she proceeded to listen to Rick's whole collection learning nearly every word. We got tickets. She was going to make a sign hoping Rick might see it and sing her Happy Birthday, like Justin Timberlake had done on her brother's 8th birthday. Attention always seemed to be focused on him and he had inadvertently become our autism poster child after the JT birthday video had gone viral. She had only just recently started exhibiting behaviors that made us suspect that like her brother, she too, is very likely somewhere on the spectrum. The focus has always been so much on him I knew she must often wonder why she didn't get the same thing.

We were pretty far in the back and it was starting to get dark so I was afraid the chances of Rick seeing her sign were slim. My husband had brought his copy of Working Class Dog and I brought a copy of Shades of Blue, the anthology my friend, Amy Ferris put together last year. It's a collection of essays, one of which I wrote, on depression and suicide. I know, sounds uplifting, right? But that is exactly what this book had become as it was compiled and I brought it because I knew it was something Rick had struggled with. He wrote openly about his depression and failed suicide attempt in his memoir, Late, Late At Night, published in 2010. I brought a copy of that as well, hoping for the chance at getting it signed which started to wane as it got darker. I knocked over the cupcakes we had carefully carried around the venue trying to not smear the one that said "Rick". As if she wasn't going to be heartbroken enough if he didn't see her sign, I ruined the flipping cupcake with his name on it.

While we were at the concert, we had befriended Laurie, the feature story from Rick's documentary, An Affair of the Heart. Our family had watched her story unfold sitting around TV the previous week. Laurie told the story of how music had saved her, specifically, Rick's music, while recovering from a heart surgery to correct her congenital defects that left her debilitated and disabled. Luckily, Laurie ultimately recovered after more surgeries and many years of struggle, but we could certainly relate to the saving power of music. We had witnessed it in our own lives, so when we met Laurie for the first time, it was as if we were long lost relatives that hadn't seen each other in years. Music does that -- it connects us and brings us together. It has the ability to tear down walls you thought were impenetrable. We had seen it happen very much like magic with our son, Julian.

He had come alive under the spell of music. We had witnessed his metamorphosis since it had become a larger part of his life. The experience of Justin Timberlake singing Happy Birthday to him along with 25,000 people has changed him forever. It has given him the ability to integrate into a world that had previously been uncomfortable and foreign to him. In a day and age when music programs are being cut left and right from school curricula, Julian's video going viral propelled us forward designing music programs for autistic children that is currently in the works. I don't think it's an exaggeration to say music saves lives. Some might say that I'm a dreamer. My response can only be, But I'm not the only one.

Music had been one of the things that had brought my husband and I together in the first place. On paper, the likelihood that we would ever stay together was small. We met on Yahoo Personals. I was a farm-girl from Missouri, he was a Jew from New York. On our first date, he made meatballs and gravy (his Italian grandmother's recipe, swoon). Then we sat on the floor and listened to music until 3 a.m. He introduced me to Pink Floyd and I exposed him to Radiohead. A week later, I moved in with him. It was the most ridiculous thing we ever did, and we never looked back. But that's for another story.

Now we had these precious children in the mix. Fragile, high-functioning autistic children (one confirmed, one suspected) entrusted to us to teach and to love. As their parents, it is our job to make a way for them to experience life at its fullest, despite any disabilities they might have. We had felt the power of music in our own lives and wanted nothing more to share that with our children. Growing up, my husband and I had both sought refuge in music. We have had many a late night discussion, our first date included, of how music carried us through the good and the bad. It had always been an integral part of my life in both the happy times before the double-digits, and later through the depression that secretly began when I was ten. I had forgotten so many of the details until my daughter brought the 80's back to me. Now we are back to vinyl. Everything old is new again. Like a record, it all comes back around.

Kids have a way of bending time back on itself. Watching her sing every word to Jessie's Girl sends me down a wormhole where I am her age and it's still 1981; my parents are still married and my favorite thing ever is my fuzzy blue legwarmers. She is there now, the place I once was, where hope is palpable and anything is possible. I long to keep her here where there is little pain and lots of beauty and wonder. The place that no longer exists after you discover how dark and horrible this world can be.

But tonight was for celebrating and we weren't thinking about the horrors befalling the world outside. Rick's guitar tech had let my husband in on a little secret that only the most hard-core Rick fans know. Apparently Rick loved children and like to get kids up on stage during his song, Don't Talk to Strangers. I thought at the very most, Minnie might get a Happy Birthday from Rick if he could see her sign. My husband took the kids down front as soon as he heard the song begin and what happened next I'm still pinching myself to believe. Rick Springfield not only led the crowd in singing Happy Birthday to Minnie, they had a dance party, they sang, and Julian even jumped up on the drums.

And that wasn't the end of it. We met Rick backstage after the show and Minnie gave him the cupcakes even though the icing was ruined and I gave him Shades of Blue and he signed our stuff and (breathe) he was so gracious and kind and my mind is still spinning because how do you fall sleep after Rick Springfield brings your children to the stage and sings your baby girl Happy Birthday? How do you sleep knowing the impact a single event can have on a young life? How can I sleep without shouting from the rooftops about the magic of song? I can't. I can't sleep and the neighbors will likely call the cops if I start shouting from the mountain at this hour. So I write. I keep writing until it comes together like a song. It's made of words instead of notes, but it's my composition. A letter to my first love. Music.

Longfellow wrote, "Music is the universal language of mankind." It's the reason a chord progression can reduce us to tears. It's why even when the words are vague or we can't understand them or sometimes even when there are no words at all, it can still move the deepest parts of our soul. I learned this language when I was young and I clung to it. I'm still holding it close and I'm still listening. I'm teaching it to my children. I find it makes it much easier to understand this difficult world.

"The future of the world's in the hands of children. So celebrate youth. Teach them right. Looking in a child's eye, there's no hate and there's no lie. There's no black and there's no white."

I can think of no more relevant words for these times. I can think of no other words right now that give me such hope. I know there is so much to mourn these days. But for today, on this day our baby came into the world seven years ago--We're gonna celebrate youth.

And locked up here inside our spirit
Is the child that we are, hear it
Some of us will always fear it
And some will heed the cry

This piece has been edited and originally appeared on the author's blog,
Be Still and Still Moving; Kindling the Light Within

For more information on autism or to find out about how you can get involved in our developing music program, visit Tree of Life United Ministries