"We are jubilating," said one of our AUN employees. Indeed much of Nigeria, the continent, and the world were celebrating along with Nigeria. The peaceful transition to a new administration not only ensured the stability and growth of Nigeria's democratic system, but sets a shining example for the rest of the world. Nigerians should be very proud.

Many problems requite immediate solutions, especially those in the Northeast of the country where Boko Haram has waged war for the past there years. After a trip to some of the northern cities this week, war is the only word to describe the damage.

This week members of the American University of Nigeria's Adamawa Peace Initiative (API), several Internally Displaced People (IDPs) from the cities we would visit, and a few international journalists, drove north to inspect the damage. The State Emergency Management Agency (SEMA) provided an armed escort.

Many of the IDPs want to return home and plant their crops before the rains begin. Will that be possible? We hoped to have some answers for them.

The first few towns outside of Yola showed some sign of recovery. Many have returned to Gombi and markets were alive. In Hong we began to see more destruction: the primary and secondary school, the EYN Church and Living Faith church, and many homes were burned and destroyed. The Hong Local government secretariat and surrounding government buildings had been shelled. Despite this we saw some signs of recovery. The LCCN church was being rebuilt, as was a filling station. The hospital was intact. We were hopeful.

Leaving Hong though we encountered our first of five bridges that had been destroyed. Our phones quit working. No communication was now possible. The chatter in the car died down.

We came to the junction in Marraba. It was clear that very serious fighting had occurred here. Both churches and mosques -- across the street from each other -- were destroyed. Most of the public buildings had been shelled or burned. The health clinic was damaged beyond use. The EYN national headquarters and clinic were demolished. No farms were being cleared and prepared for the rainy season. Leaving Marraba we came to a bridge that had been cut in half. Only a bomb could have done this level of damage. We carefully drove down the ravine next to the bride.

As we continued to Hilde we began seeing destroyed tanks and burned out cars in the roads. There were only a very few people walking on the road -mainly women, youth and the elderly. Here too, no land was being prepared for farming. We drove to Uba. More damage: the Para Secondary school was burned, the Government Secondary Science school was vandalized, the police outpost was damaged beyond use. All the churches that we could see were burned. The road was pitted and driving was very slow. From Hilde north, we began to see a stronger security presence, including male and female vigilantes

As we left Uba a large groups of vigilantes lined the road, which was closed to the public. They removed large blocs and tree limbs so we could continue our journey.

We continued to Bazza. Here we encountered another bridge that had been destroyed--the Kadzum bridge. One of our refugees was from Bazza and said we had to visit St. Mary's Church. This was his town and he had heard about the destruction. We were unprepared for what we saw: offices with all the records for 60 years burned in the same room where the chalice was also burned, the cemetery desecrated. Statues had been removed and from the Church and their heads smashed, the cross had been taken from over the alter and the area burned; its shadow remained on the wall. The rage of Boko Haram was still in the air. But it was not only churches that they destroyed. Not far away a mosque was completely vandalized-with wiring hanging from the ceiling. We continued on to Michika. 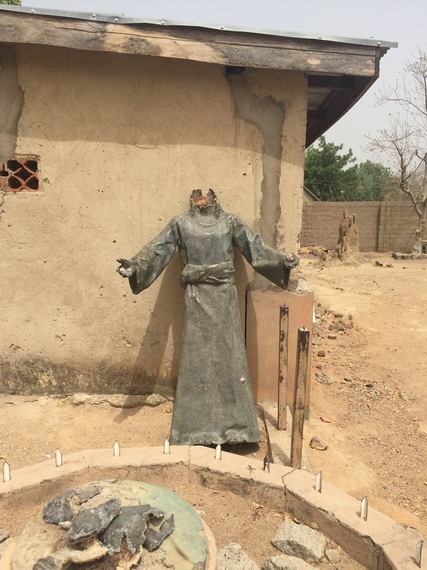 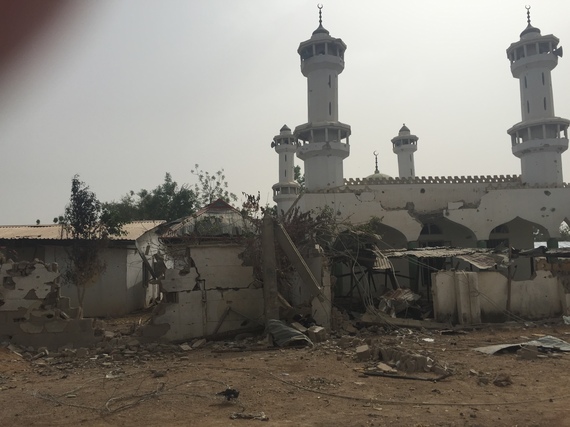 There were no people on the road as we drove in. "It's total destruction," said Reverend Joseph, an IDP from Michika. All of the churches were burned, the major mosques destroyed, the primary school and federal science technical college burned, the market was destroyed. Arabic writing was on many houses and shops.

No livestock were visible. There was un-harvested corn in the fields -- no one was expected back to pick it. About 50 women returning from Yola were on the road. They were stranded. They had no food or water. None had eaten in 24 hours. They wanted to go to Madagali, but as the army officer told us "There are still mopping up operations in the city -- no one can go further."

The Nigerian army has been widely criticized for their inability to defeat Boko Haram. All of the military personnel who we interacted with were highly professional. In Michika one of them, a medic, was dispensing medicines at the only functioning health clinic in the region, the only building in Michika where there was life. Yet those at the clinic are suffering greatly. The medic said he sees 200-300 people per day and he is almost out of medicines. With tears in his eyes he begged for medicine and antibiotics. "I am seeing more malnourished people, please send us oral rehydration therapy." Women who were interviewed by Imam Dauda Bello at the clinic complained of hunger and starvation. 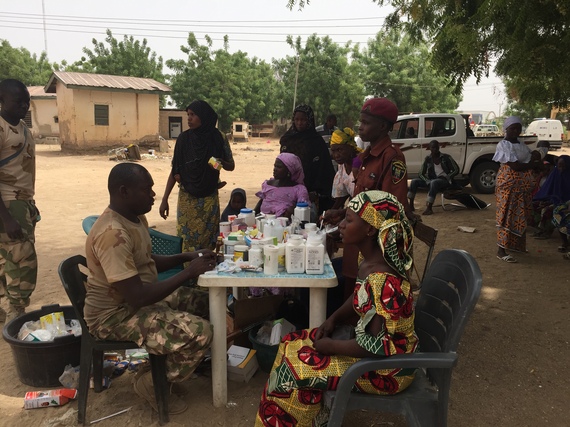 "Michika now is a wasteland", said one of our API members as we drove away. We were quiet until we came to Mubi. There were many people on the street. Mubi is beginning to come back to life, yet all the banks have been destroyed and only one hospital has recently begun functioning. All churches were burned. Adamawa State University suffered great damage, (some of the seniors are finishing their studies at AUN and at other locations.) The Federal Polytechnic was destroyed.

As we left Mubi to drive home to Yola, we all reflected on the day's journey. What could we say? How could people return to areas that have no water, no power, no communication, no markets, no food or housing? What about security? Is it even safe for people to return home? Our security expert thought that when the military withdraw, Boko Haram could well return unless security is strengthened: it is difficult to protect and secure all villages and towns as they are so spread out. Towns like Michika have only recently been retaken; the threat lingers.

Our group concluded that until health clinics are reopened and stocked, schools restored, security strengthened, banks and businesses restored, homes rebuilt, roads and bridges repaired, utilities such as light, water and communications are restored, the lives of those who return will be endangered.

What about the IDPs? How will they live as refugees in towns and homes that are not theirs? If they remain in communities like Yola they will need food, health care, shelter, and access to education until they can return home

Famine and disease are looming. The new government has to respond quickly to ensure that those who have suffered so much can survive and rebuild their lives.