It's the height of autumn's radiant color here in New Hampshire. As I look at the oranges and reds and yellows of the maple trees in the yard, I reflect on one of the divine attributes: uniqueness. Not only every tree, but every leaf on every tree that has ever existed or ever will exist is unique. This difference lends to the beauty and overall harmony of the earth, and it is a sign of the sacred uniqueness that is an aspect of the human soul.

Today, Baha'is in 188 countries worldwide celebrate the Birth of Siyyid Ali-Muhammad, the Herald of our Faith, whom we know as the Bab, a title that means both "Door" and "Gate" in Arabic. The first of the two Manifestations of God -- Prophets -- of our faith, the Bab was born in 1819 in Persia, today's Iran. The Baha'i writings state:

The appearance of the Bab resembles the dawn, for the dawn holds the promise of the sun. The dawn of the Bab promised the rising of the sun of truth that is to envelop the whole world. 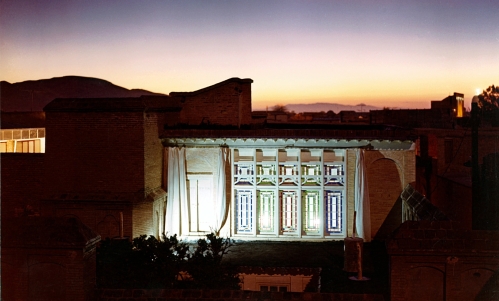 The House of the Bab, Shiraz, Iran, before its destruction in 1979
Copyright © 2007 Baha'i International Community, Used with permission

To Baha'is, his birth represents the dawn of a divinely promised Day in humanity's life, the age that will witness the maturity of the human race. That maturity will be reflected both in its collective unity and in the uniqueness of its individual elements. This is the dawn of a day during which we Baha'is believe the human race will create "a world organically unified in all the essential aspects of its life, its political machinery, its spiritual aspiration, its trade and finance, its script and language, and yet infinite in the diversity of the national characteristics of its federated units."

We have created you from one tree and have caused you to be as the leaves and fruit of the same tree, that haply ye may become a source of comfort to one another. Regard ye not others save as ye regard your own selves ... It behooveth you all to be one indivisible people.

His advent signaled the termination of the "Prophetic Cycle" and the inception of the "Cycle of Fulfillment." He publicly claimed to fulfill the promises of all faiths:

I am, I am, I am, the promised One! I am the One whose name you have for a thousand years invoked, at whose mention you have risen, whose advent you have longed to witness, and the hour of whose Revelation you have prayed God to hasten.

When he sent his first disciples into the world to proclaim his Faith, he summoned them to loftiness, to sacrifice for the proclamation of the truth and to a unified view of the world's great faiths:

O My beloved friends! You are the bearers of the name of God in this Day. You have been chosen as the repositories of His mystery. It behoves each one of you to manifest the attributes of God, and to exemplify by your deeds and words the signs of His righteousness, His power and glory. The very members of your body must bear witness to the loftiness of your purpose, the integrity of your life, the reality of your faith, and the exalted character of your devotion ... The time is come when naught but the purest motive, supported by deeds of stainless purity, can ascend to the throne of the Most High and be acceptable unto Him.

In his farewell address to these disciples he quoted verses and used imagery from the Hebrew Bible, the Gospel of Matthew and the Quran, and he sent one of his disciples to the peoples of India.

He was intolerant of mediocrity, and wrote that "Everything must be brought to its utmost limit of perfection." We Baha'is often emphasize unity, but the call in our Faith to uniqueness is no less important. Each of us is compared to "a mine rich in gems of inestimable value." We are assured that in this day the "potentialities inherent" within us will be attained, and the "innate excellence" of our reality will be demonstrated. Experience tells us that our destiny, our ultimate self-awareness, comes through our common service to humanity.

These two aspects of spiritual maturity -- the expression of our own identity, and the harmonization of our beliefs and goals -- will only be brought about by the utmost effort. Our writings, speaking of the attainment of world civilization, state:

A few, unaware of the power latent in human endeavor, consider this matter as highly impracticable, nay even beyond the scope of man's utmost efforts. Such is not the case, however. On the contrary, thanks to the unfailing grace of God, the loving-kindness of His favored ones, the unrivaled endeavors of wise and capable souls, and the thoughts and ideas of the peerless leaders of this age, nothing whatsoever can be regarded as unattainable. Endeavor, ceaseless endeavor, is required. Nothing short of an indomitable determination can possibly achieve it. Many a cause which past ages have regarded as purely visionary, yet in this day has become most easy and practicable. Why should this most great and lofty Cause -- the daystar of the firmament of true civilization and the cause of the glory, the advancement, the well-being and the success of all humanity -- be regarded as impossible of achievement? Surely the day will come when its beauteous light shall shed illumination
upon the assemblage of man.

This effort is worthy of the wholehearted commitment of our life's energies. Today, we celebrate the birth of One who gave his life for this goal.

More can be read about the Bab here and a selection of his Writings is available here. A fuller version of this article, with citations to quotations and additional thoughts, is found on my blog.

A Baha'i for more than 40 years; professionally a lawyer.