It's a universally acknowledged truth that growing up is tough. Whether your face explodes with acne or your body seemingly changes overnight, nobody fully escapes puberty's wrath without experiencing some seriously awkward days (or years) -- and your favorite, glamorous celebrities aren't exempt. Here's what they went through during puberty, and how they dealt with it:

"Junior high was actually sort of hard because I got dumped by this group of popular girls," Swift said in a Teen Vogue interview back in 2009. "They didn't think I was cool or pretty enough, so they stopped talking to me." She added, "I’d sit there in school and I’d be hearing people like, ‘Oh my god, this party that we’re going to is gonna be so awesome on Friday. Everyone’s invited except for [Taylor]."

Swift managed to turn her pain into all your favorite songs about heartbreak, and ironically, kind of credits her bullies: “Really, if I hadn’t come home from school miserable every day, maybe I wouldn’t have been so motivated to write songs. I should probably thank them!”

Deschanel told Marie Claire that as a "chubby" adolescent, she was "ridiculed" by school bullies. She summed up her experience in an interview in Australia's Cosmopolitan in March 2013: "Nothing could be as hard as middle school." After making it big as a movie star, Deschanel started the website Hello Giggles to help young women cope with their own turbulent times, saying "[N]ow I feel like I’m on a mission to make it a thing that helps other women. If there had been a place like that for me when I was 13, I would have felt so much less alone."

"I was the first girl in my class to wear a bra. I remember crying in the bathtub. All my friends were super-skinny. I took a washcloth, made it hot, put it over my chest and prayed, ‘Please don’t let them grow any bigger. They’re embarrassing me," she recalled in an US Weekly interview. Kardashian credited her mom with helping her accept herself, saying, “She helped me with my outlook: I have curves and that’s never going to change, so I’d better start embracing them." By all accounts, she certainly has.

The "Orange Is the New Black Star" talked to Allure magazine about her teen years, saying, "It was tough at home, and it was tough at school. My experience was painful, so painful. There was a period of time I had very short hair, and I had glasses, and I was very tall for my age."

Schilling says the experience taught her to seek value outside of her appearance, saying, "I don't feel bound by my face or my body. I don't feel like that's the biggest gift I have to offer the world. I feel like there are more parts of me to offer than that."

Demi Lovato told Katie Couric that she had terrible body image issues in her teens: "I was going through puberty, I was changing and I didn't like the fact that I was gaining weight or curves that I didn't understand!" The actress eventually developed an eating disorder. After seeking treatment in rehab, Lovato's perspective has changed: "The only way to accept yourself is to say, 'God, I'm giving it to you,' or whatever you feel gives you that power. It's just surrendering..."

On the Ellen DeGeneres Show in 2011, Timberlake said that as a teen, he "got picked on all the time." and "had terrible acne, weird hair." Now, he reflects on it: "When you’re a kid I think you try so hard to fit in and when you get older you realize that fitting in isn’t really the thing that’s more interesting… I would not be here if I would have listened to the kids who told me I was a terrible singer and I was a sissy… Be different.”

Beyoncé is obviously ***flawless, but she didn't always feel that way. The singer told Essence that she "was awkward around other kids" and didn't have any real friendships. But despite being shy in real life, she felt "comfortable on the stage." In her short film, “Yours and Mine,” Bey summed up how she's transformed:

I was always the last one to get hips, to get boobs. I was always very slim and people would pick on me for being skinny, saying that I didn't eat enough pies or whatever it was. That was my insecurity growing up, but then I just thought, "You know what, your time will come" and over night it really did happen. But that was the main thing at the time that I was very self-conscious of.

Yep, there's hope for us all.

8 Celebrities On Dealing With Their 'Awkward Phase'
Awkward School Photos 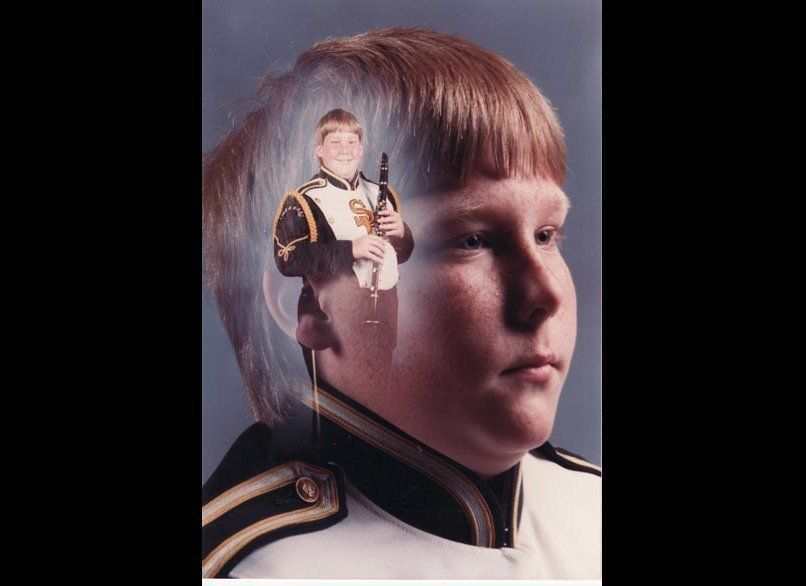