In light of the shooting at Sandy Hook Elementary in Newtown, Conn., celebrities and prominent figures are speaking up to push for gun control and demand change.

As soon as the news of the tragedy broke last week, celebrities took to Twitter to voice their opinions and stars such as Jamie Foxx and Bruce Jenner spoke out against the violence in interviews.

"The time has come for courage," the ad reads. "The Courage to make our schools and workplaces, our shopping malls and movie theaters -- all the places we share every day -- safe from gun violence. The courage to stand up to the NRA -- to put human life ahead of extreme ideology. The courage to ban weapons of mass murder that at anytime, anywhere, can turn America into a killing field."

"We cannot let the latest massacre fade into memory -- another horrible headline followed by indifference and inaction," the ad continues. "We must speak for those whose voices will never be heard again. e must speak truth to those in power -- and insist that now is the time to do what is right instead of pandering before merchants of death."

The ad supports the Mayors Against Illegal Guns' Demand a Plan campaign, led by New York City Mayor Bloomberg. Check out the full ad below and find out ways that you can help here. 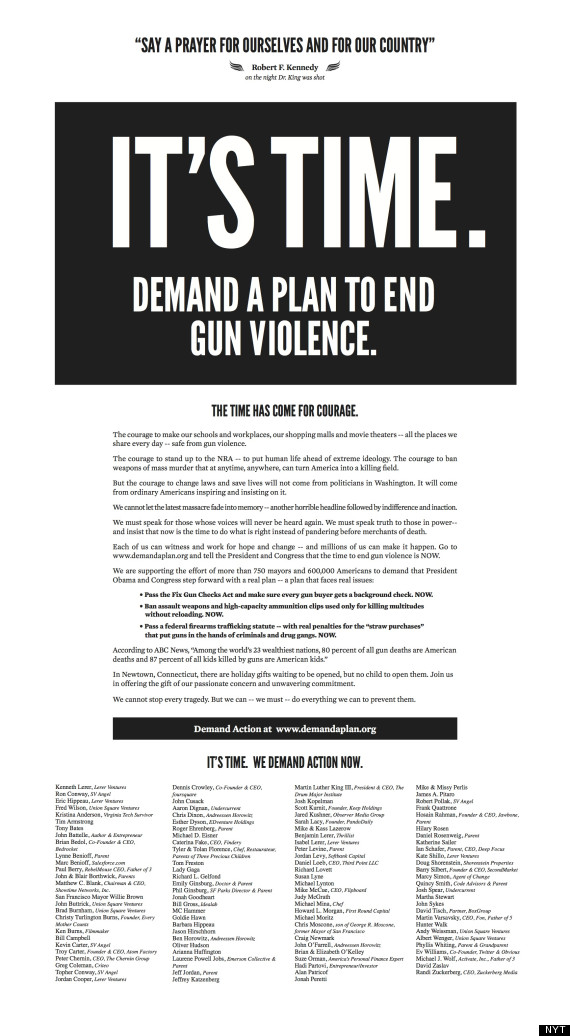