Yes, "celebrity" cats are all the rage and like their Hollywood counterparts have become the focus of public worship, paparazzi style stalking, cross-promotional advertising deals and Hollywood six-figure deal-making.

OK, my wife -- blogger and holistic cat behaviorist Layla Morgan Wilde - had the opportunity to meet an Internet cat celeb by the name of Lil Bub. It was an up close and personal tête-à-tête with the huge green eyes and protruding tongue that's made this perma-kitten so damn recognizable. Frankly, my wife fell hard for this star and afterwards kept quoting fashion icon Karl Lagerfeld who went gaga over his own kitty with remarks like "I would marry my cat if I could."

What's the secret allure of this cat? Granted, Lil BUB does have a movie deal, a book and a TV show.

Now, Mike Bridavsky, the soft-spoken audio engineer who adopted Bub as a helpless kitten with dwarfism was quick to weigh in with the responsibilities that go with caring for a special needs feline (for instance, she needs help drinking and going to the litter box). Bridavsky's devotion to his cat seems genuine and not simply a public relations imperative and for much of the interview she remained nestled in Bridavsky's tattooed arms (of course, inked with the image of his charge). No doubt they share a common destiny and as all of us crazy cat folk know felines choose their human companions.

But aside from all the cuteness Lil Bub is, in fact, a tireless advocate for adoption and poster gal for all special needs cats. So, through the use of our anthropomorphizing special translator app -- otherwise known a Mike Bridavsky, Bub's cat dad -- here's the Q & A that unfolded:

How has your life changed since becoming famous?

Bub: Well, I've always been famous in the universe. But being famous on earth is a relatively unique experience. For example, because of your abnormally intense gravitational pull I have to be carried to my book signings instead of floating there myself.

What is the core message you'd like to tell your fans?

Bub: Do what you want, and do it well.

Bub: You know, as magical as I may seem, my material needs and desires are pretty basic. I have no desire to indulge in treats although I won't turn down an occasional dollop of yogurt. And there is something about a peacock feather that makes me want to party.

Who are your fellow feline siblings and how do they deal with your fame?

Bub: My dude has four other cats: Oskar, Special Agent Dale Cooper, Vivian, and Josie. They all live at his recording studio. They have no idea what fame is and I'm fairly certain if they did they just wouldn't care. They're earth cats.

Are you single and do you have any mancat crushes?

Bub: My heart belongs to the only earth cat worthy of my affections. His name is Smoosh and he lives about 3 blocks from me.

If you had a kitty bucket list, what would be your top three?

Your cat daddy, Mike Bridavsky, has a tattoo of you on his arm. Lots of men who love cats are now coming out of the proverbial "closet." Any advice for men currently living without a feline? 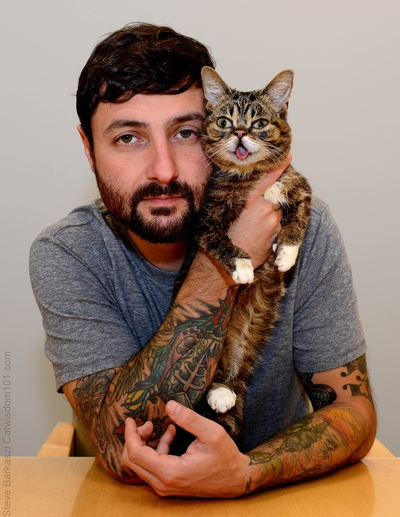