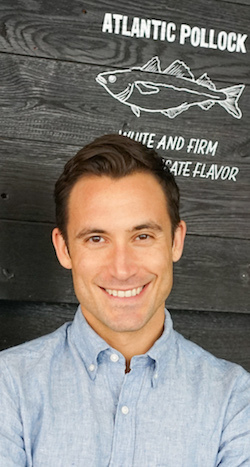 Michael Chernow, Chief Executive Everything of Seamore's, Nolita hot new seafood restaurant, gets my vote as the gutsiest entrepreneur of 2015. Why? Because his let-it-all-ALL-hang-out admissions on the first season of Consumed, The Real Restaurant Business, paid off in an impossible-to-duplicate publicity bonanza. Consumed is a reality TV series which was recently added to CNBC's business-oriented prime time lineup of Shark Tank, The Profit, Restaurant Startups, shows which have proven irresistible to entrepreneurial romantics enticed by rags to riches epics even though they often demonstrate why culinary triumphs are rarely a piece of cake.

Consumed's first series exposed snags encountered by five Manhattan restaurants. The least troubled was the 6-location Meatball Shop - a thriving, reasonably priced, fast-casual mini-chain co-owned and operated by boyhood friends, Daniel Holzman and the above Michael Chernow, who'd built their first café with their own hands using abandoned materials and had opened timely and under budget! Daniel, a Le Bernardin and CIA alumnus who'd cooked his way through the West Coast's finest kitchens, became Chef. Michael, a design-oriented French Culinary Institute honors grad in food arts and restaurant management, handled marketing, branding, found new locations and was the host and trouble- shooter when a manager needed a helping hand.

So what could go wrong? How about outside investors offering millions to buy in and nationalize the chain. Tempting? Not to Daniel, who was loath to give up control without everything operating perfectly, but Michael, a newlywed with a six-month old son, was ready to cash out on their five years of hard work. Their on-camera heart-to-hearts revealed how their differences were eroding their friendship. Michael's solution was to step back from his day-to-day involvement and let Daniel and team take over operating The Meatball Shops. Michael and Daniel hugged and parted friends with Michael still co-owner but no longer a participant or decision maker.

Michael was already thinking about his next move - a dockside/beachfront seafood shack with the same universal appeal as meatballs did. A clean, well-lighted, big, breezy room with bar and table seating, simple décor and an open kitchen that served reasonably priced, attractively presented, really fresh, local foods that tasted like they leaped right onto the plates from nearby farms, fields and oceans. Where? In a neighborhood where upward mobile twenty-somethings lived, worked, hung out and created a buzz that attracted visitors and tourists with a reasonably priced seafood menu to draw repeat clientele.

After computing expenses and estimating income, Michael calculated that a million dollars would cover his costs and leave him with 100K in working capital. He got commitments for $800,000 from interested investors. With only 200K left to go, he presented his business plan to a banker friend. OMG! Didn't he know bankers hide under their desks when chefs who want to be owners knocked on their doors? The banker told him he usually didn't invest in restaurants, but he would look the plan over and let Michael know.

Michael hired Greg Drusinsk as Executive Chef. Greg had degrees in culinary arts and restaurant management from the French Culinary Institute and UMass and an impressive employment history. Who'd he worked for? The Mario Batali and The Eric Ripert!

Michael understood that making a profit with a reasonably priced menu meant letting the pricier fish like salmon, swordfish and snapper find the platinum cards of hedge funders without his help. A lifelong fisherman, he knew how delicious fresh, local, relatively under-discovered seafood could taste when properly prepared, and partnered with fishing cooperatives, "From Dock to Dish" and "From Sea to Table," to supply him with lesser known seafood that would keep his café afloat.

While Michael and Greg tasted, discussed, disagreed and compromised on the menu, Michael found his dream venue, a big, empty, corner storefront a stone's throw from the the entrance to Little Italy. Oh boy! Michael loved it, signed the lease, used his own investment as the security deposit even though, Oy vey! the monthly rent was 30% higher than Michael had budgeted. Fortunately, his banker friend came through with the last 200K and Seamore's was on its way.

At the sample dinner for friends and investors, Greg's dishes more than passed muster. In Nolita, Michael's contractors worked steadily on the renovations. Aware that only Warren Buffett could afford to buy the kind of national publicity Consumed had supplied Seamore's with gratis, he made the most of it, showing his step by step process on the show, from the initial idea to the moment when Seamore's sign floated from the façade. I couldn't wait to go there. I wanted to meet Michael. I liked the way he handled himself and other people. He was respectful but persistent and somehow always got exactly what he wanted.

Two weeks after Seamore's opened I appeared at the corner of Broome and Mulberry at 5:30 p.m on a Saturday night, not a prime time dining hour. There were plenty of seats, but most were already taken. The biggest downside were my fellow diners. I was three times older and weighed one and a half times more than most of them. #@$%^&!

Seamore's menu is simple: fish tacos, fish sandwiches and The Real Deal - all with that day's catch for under $21. Beers brewed in Brooklyn. Local wines made on Long Island's North Shore. Best of all, Michael was not only there, but really present, moving from table to table, meeting new friends and fans, grateful for having lucked out with this venture. He was the perfect host/entrepreneur, really connecting, talking to everyone for as long as they liked. And the food tasted terrific. Michael's detail-oriented planning had really paid off.