Half or more of the adults in some key swing states rely mostly on cell phones, according to a study released Friday -- the latest evidence of a growing complication for pollsters who once relied on dialing land lines.

By the end of 2011, about a third of households nationwide were "wireless [phone] only," according to the National Health Interview Survey. Still others were "wireless-mostly," meaning they owned a landline but received nearly all their calls on a cell phone, making them unlikely to pick up their home phone for pollsters.

While the number of people who depend on cell phones has been steadily increasing for years, the report breaks down for the first time what those numbers look like in each state.

The wireless-only and wireless-mostly tend to be a little different from their landline peers -- younger, more often minority, and frequently more Democratic-leaning. They're also
somewhat less likely to vote
. But increasingly, they make up a sizable bloc in some battleground states, including more than half the adults in Colorado, Nevada, Florida and Ohio.
Advertisement 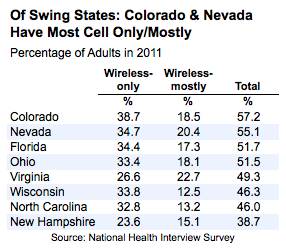 Calling cell phones is expensive, and automated phone polls, hampered by Do Not Call restrictions, often exclude cell phone users altogether. Other survey houses use weighting to combine cell stats with those of landline users, but there's no real consensus on the best way to compile the data. Most national media telephone surveys include cell phones, and Gallup recently boosted the number of cell phones it calls for its national surveys. At the state level, the NBC/WSJ/Marist and CBS/New York Times Quinnipiac are among those that include cell phones.