Citizens and lawmakers nationwide are increasingly aware that using a cell phone while driving is the safety equivalent of taking the wheel after a few drinks. Yet despite a legislative and educational push to end distracted driving, Americans remain stubbornly unwilling to put down their digital devices, with progressively lethal consequences.

In 2011, the most recent year in which data is available, 3,331 people were killed in automobile accidents involving a distracted driver, according to data from the National Highway Traffic Safety Association -- more than the 3,267 such deaths reported the year before. About half of 2011's fatal crashes from a distracted driver didn't specify the source of distraction, but when distractions were identified, cell phones were often a leading cause, contributing to 350 fatalities, or 12 percent of all fatal crashes from driver distraction. And most experts say these statistics are vastly underreported, meaning that thousands more lives a year are almost certainly being claimed by an epidemic whose causes are already well understood.

This is not for lack of laws on the books. In the four years since The New York Times published a Pulitzer prize-winning series on distracted driving, most states have enacted some form of prohibition on talking or texting on cell phones while behind the wheel.

Some 41 states plus the District of Columbia now have a ban on texting while driving, according to a survey released this week by the Governors Highway Safety Association, a nonprofit association representing the highway safety offices of each state. However, only 11 states and D.C. require drivers to use a hands-free device while talking on the phone. A total of 47 states report some form of enforcement protocol and public outreach effort aimed at limiting such practices, with the only holdouts being Arizona, South Carolina and Montana. 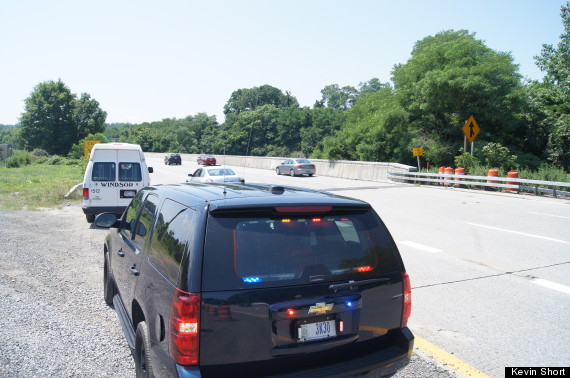 And yet this legislative response has failed to reverse the trend. According to the GHSA’s study, 15 states say their distracted driving crashes have increased, 11 say they have decreased and 16 report the same rate of crashes.

“Restrictions on cell phone use do not appear to be making the crashes go down faster in states that have the laws,” Russ Rader, senior vice president at the Insurance Institute for Highway Safety, a driving research organization, told The Huffington Post.

Paradoxically, Rader added, cell phone bans appear to reduce instances of people using their phones while driving, yet that fails to translate into a “corresponding effect on crash risk.”

Dozens of studies have shown that using a hands-free device -- currently prescribed by 11 states that ban driving while using a hand-held phone -- is in fact equally, if not more dangerous, than holding the phone.

That need to be connected while on the road has had profound consequences for 27-year-old Jacy Good. While driving home from her college graduation in May 2008, her car was struck by a semi-truck swerving to avoid a reckless driver talking on his cell phone. Both of her parents were killed instantly, and Good was left with lifelong handicaps.

“It’s an addiction. The laws have to be in place, but it has to go beyond that because obviously people aren’t complying with those laws,” Good told The Huffington Post. “It comes down to the social standards we set for ourselves; it needs to be as unacceptable as drunk driving.” 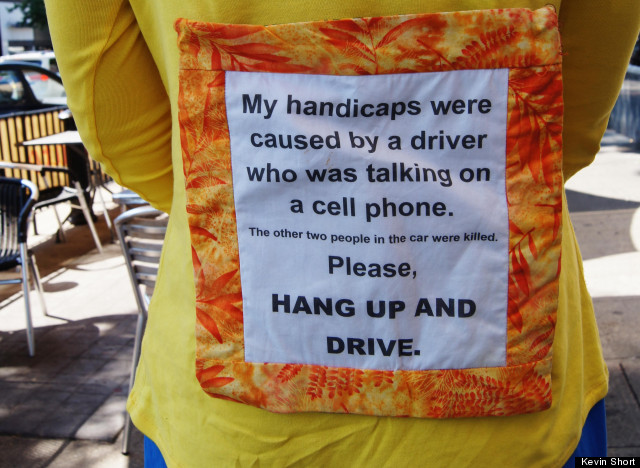 Jacy Good wears this poster on her back to raise awareness about the perils of cell phone use while driving. (Kevin Short / Huffington Post)

Even as the lethal consequences of this reality grow, so do the temptations to look away from the road and focus on a screen as the current of constant, 24/7 connectivity reaches further into every crevice of American life. Consumers increasingly expect to be wired and available for digital communication wherever the road takes them.

So-called infotainment systems included in cars will expand fivefold over the next five years, according to a forecast from the Automobile Association of America. The car is increasingly becoming a mobile office, social news feed and multimedia hub.

“There is a looming public safety crisis ahead with the future proliferation of these in-vehicle technologies,” said AAA President and CEO Robert L. Darbelnet in the report last month. “It’s time to consider limiting new and potentially dangerous mental distractions built into cars, particularly with the common public misperception that hands-free means risk-free.”

Overall, car accidents have steadily declined since 1975, yet the grave consequences of phone use while driving pull in the opposite direction, remaining stubbornly consistent.

The extent of the problem amounts to a crude science. Experts say data about distracted driving crashes is woefully inaccurate. The National Safety Council reviewed 180 fatal cell-phone related crashes from 2009-2011. Of these, only half were recorded in the federal data. Even in cases when the driver admitted to cell phone use, only 50 percent of the crashes were properly coded.

These systemic flaws -- in addition to crashes when there are no witnesses, a driver lies about phone use or the police do not ask about distractions -- have led the NSC to estimate that a quarter of all crashes involve phones, a figure far higher than the governmental estimate.

Most states have been making a push to limit such fatalities, taking their cue from The New York Times series and resulting public furor. Some 39 states plus D.C. now identify distracted driving as a priority issue, up from 28 states in 2010. More states than ever are collecting crash data, trying to enforce the state law and launching media campaigns.

“The science is out there, and we’re ignoring it,” Good said. “This is absolutely preventable ... there’s nothing on your phone that is more important than the life I wanted to live or the lives of my parents.”

How The iPhone Came To Dominate America