The sign at The Cell Theater entrance warns, "TONIGHT'S PERFORMANCE OF 'BLOOD' AND 'DANCING AT LUNACY' CONTAINS THE SOUNDS OF GUNFIRE."

Take that as a sign that there'll be none of the season's shamrock and leprechaun sentimentality, so brace yourself for a riveting duet of dramas on rebellious Ireland, each built around a trio of all-too-human, and in one case, quite inhuman, revolutionaries. Blood by rocking Renaissance man Larry Kirwan, conjures a likely scenario for a mystery of the history in the run-up to the 1916 Easter Rising, while the aptly named Dancing at Lunacy tells of a helter-skelter clash of IRA operatives in an illegal drinking club in Belfast of 1984.

The opener, Blood, is a story of three key historical figures of the Easter Rising told in three scenes, the first brief vignette set in 1916 in Kilmainham Jail where, bound to a chair, is James Connolly (Ciaran Byrne) -- common man, communist, head of the Irish Citizen Army -- ruing the day he allied with his co-conspirators in the failed Easter Rising, cursing the Irish people who failed to rally to the cause: "Shower of bastards -- spittin' at us and spatterin' us with horseshite as we were frog-marched out of the GPO and into this hellhole!" 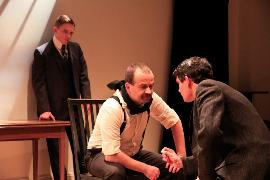 Scene Two goes the heart of the drama, a flashback to 1913 when Connolly disappeared, held in secret for three days by the rival Irish Republic Brotherhood. Kirwan scripted and Kira Simring directed a scene of escalating tension played out at close quarters, a boxing match with three contestants, whose rivalries and alliances shifting round by round. There's Connolly, the vibrant prole of the Dublin's slums termed the worst in Europe; Sean MacDermott (Jeb Peterson), the wraithlike organizer of the IRB -- pale, gaunt, stricken with polio, which at least left him with a cane to wield; and Padraig Pearse (Paul Nugent) -- poet, barrister, Gaelic language proponent, who would be the president of the Irish Republic in the few days before the Rising was crushed. As they spar, a breakthrough is blundered into, a tense equilibrium achieved, a wan handshake brokered and the fates of these three and many more are sealed. Blood ends where it began, Connolly alone in Kilmainham Jail awaiting his own bitter conclusion to the Rising.

Kirwan gives his actors a great material -- a compelling historical incident, tightly laced dialogue and rich dramatic possibilities -- and they rise to the challenge. Ciaran Byrne's Connolly is impassioned, physical, pugnacious, instinctive, with the down-to-earth sensibilities of a family man and an appealing northern tinged accent. Jed Peterson's Sean McDermott is cold, austere, conniving, a fatalist and he plays the character's stiffly challenged physical infirmities convincingly. Paul Nugent plays Pearce as a conciliator, opportunist, a bit out of his league and uncomfortable in his own skin, with a Mitt Romney-esque awkwardness when he tries for the common touch, but with steely conviction for the cause at his core.

And Nugent's night was only half over.

He comes back with a flourish in Seamus Scanlon's Dancing with Lunacy in an indelibly rendered character named McGowan, an offbeat wiseass, fuelled by manic energy and freshly brewed tea, a pop music-loving, gun-toting, Clockwork Orange-caliber sociopath for the Republican cause. The play's title is an apt wordplay on Brian Friel's Dancing at Lughnasa, especially in the manic moment when McGowan pistons up and down in a punk dance called Pogo (think Irish step dancing weaponized and on crack... not craic). 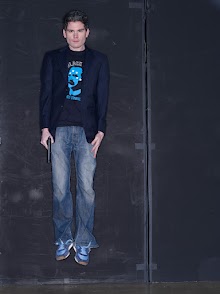 Paul Nugent in full pogo in Dancing at Lunacy, photo by Christina Kim

Dancing at Lunacy opens in dead-end Irish Republican drinking club, a young guy (Brett Aresco) behind an old bar, and a couple of bar flies enjoying their stupor, until McGowan cajoles his way in, looking natty in a tight-fitting jacket over a Black 47 tee shirt. His banter is weird, entertaining and unsettling with an edge sharp enough to slice onions. With the arrival of an older man, the IRA hard guy Pender (Philip Lallen), things get awfully serious, awfully fast as McGowan, Pender and a bar patron named Ahern (Todd Pate), an alumnus of infamous Long Kesh prison, become a terrible triangle with a traitor at its core. The scene escalates in menace and violence as quickly as it retreats from sanity and civilization.

Scanlon has crafted a powerful piece that refuses to romanticize "The Troubles" and created in McGowan an original, chilling and bizarrely memorable character.

Both plays are staged to fine effect in The Cell's configuration where no seat is more than four rows from the stage and all seats are on opposites side of the stage, though I recommend the seating section by the door for the best angle on Dancing's... defining moment.

There are many St. Patrick's Day events this week that you may have trouble remembering the next day. This is not one of them.

The Irish Cell double bill of Blood and Dancing at Lunacy has been extended to March 29, with performances typically Thurs.-Sat. evenings with an additional show on Mon, Mar. 19. The Cell is at 338 W. 23rd St, NYC, convenient to west side subways (646-861-2253). Tickets are only $12, less than a pair of pints at the nearby pub. Order tickets online at The Cell Theatre.
New York Irish Arts is a great source of info on the New York Irish arts scene.