It's official: Nobody wants to hear your phone calls.

On Thursday, news broke that the Federal Communications Commission will soon consider letting people make cell phone calls on airplanes. Unsurprisingly, the prospect of having to sit next to some blabbermouth on their next commercial flight has some people very irritated:

You think you hate babies on planes? Wait til there are teenagers on cell phones on planes.

I don't think phones should be allowed on planes because do you know how annoying that would be?

The airplane is one of the last save havens from obnoxious phone etiquette. They're everywhere else! No phones on planes! #orangeroom 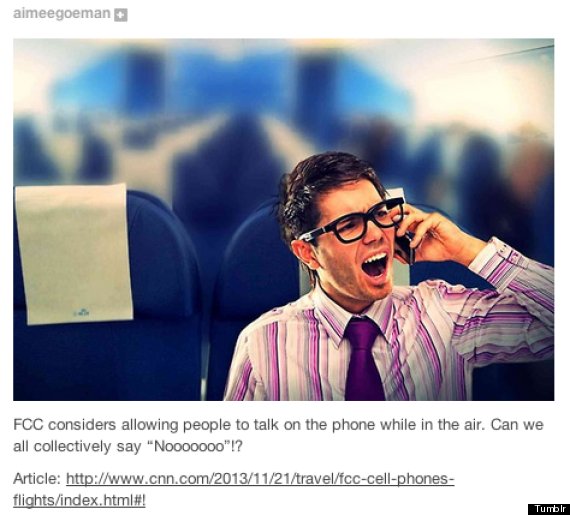 FCC considering allowing cell phones on air planes above 10,000 ft. Big mistake. No need to listen to other conversations. Things can wait.

Texting? Playing games? Surfing the web? All of these are preferable to making phone calls.

Cell phones on planes?... Text - yes, talk - no. Talking would be more annoying than cell phone talk in a restaurant...😁#OrangeRoom

Wondering how many people are REALLY in favor of allowing use of cell phones (for actual phone calls) on planes. Texts - fine, chatting - no

Terrible idea! Cell phone talking on planes getting approved. http://t.co/rwsRFpEDHD Where is the quiet car?

The airplane is one of the last save havens from obnoxious phone etiquette. They're everywhere else! No phones on planes! #orangeroom

Flight attendants are against the move as well.

The Association of Flight Attendants-CWA issued a statement that it is against the rule change.

“Flight attendants, as first responders and the last line of defense in our nation’s aviation system, understand the importance of maintaining a calm cabin environment. Any situation that is loud, divisive, and possibly disruptive is not only unwelcome but also unsafe,” the union told Politico.

@richardquest NO to phones on planes! Flight Attendant opinion here.

There's even a White House petition to stop the FCC. 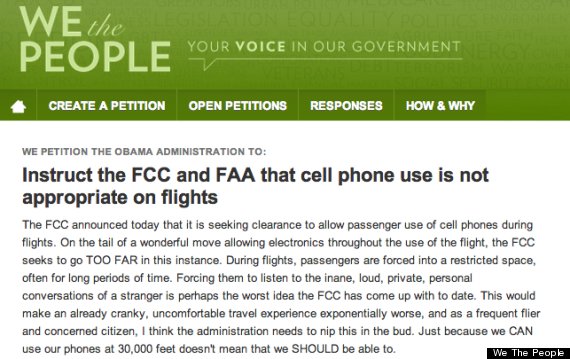 The 8 Most Important Mobile Phones In History