The first time I saw celtuce listed on a restaurant menu -- last winter, at modern Chinese restaurant Fung Tu in New York's Lower East Side -- I thought I knew what it was. Maybe because the name sounded like a portmanteau of "celery" and "lettuce," two of the most familiar vegetables around. Or maybe just because being a professional food writer gave me the arrogant assumption that I was familiar with every single vegetable on earth. I may even have conflated celtuce, on some dim level, with cardoons.

Still, I have to admit that I didn't have a clear idea of what to expect when I ordered it. And that when a plate of what looked like pale green, slightly translucent pappardelle arrived, I was surprised. I had never seen anything quite like it before. 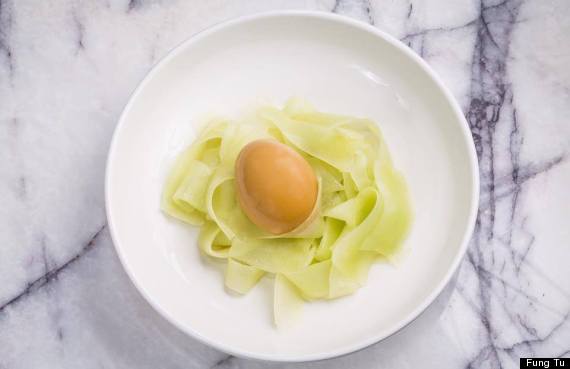 One bite told me I'd never eaten anything quite like it either. The texture of the vegetable -- and the waiter assured me it was a vegetable -- reminded me of cooked leek. But it also had the homogeneity of a noodle and some of the crunch of shaved jicama. Its bright flavor was a little like a mix between bok choy, celery root and water chestnut, but was far milder than any of those. By the end of the plate, I was a celtuce fan.

A bit of subsequent Internet research revealed that most of the world's other celtuce fans live in China, where the vegetable is known as wosun; it's especially popular in the Sichuan province. It turns out that my etymological guesses weren't so far off: celtuce is a type of lettuce bred in southern China for long, flavorful stems rather than abundant, tasty leaves. Raw, it looks sort of like a particularly gnarled leek, or a kohlrabi with its bulb stretched into a long cylinder.

In America, celtuce remains deeply obscure, even in the neophilic world of fine dining. True, Epicurious called it "the next big thing" in July 2013, and Michelin-starred chef April Bloomfield cited it as "the most underappreciated vegetable" in Bon Appetit this past January. But a search on MenuPages turned up just four restaurants in the country that serve it: Blanca and Fung Tu in New York, and Alma and Joe's in Los Angeles.

That celtuce should pop up on menus in those two cities in particular may be due, in no small part, to the advocacy of prominent chefs in each one. New York's minor love affair with celtuce has been traced back to vegetable savant Dan Barber, of Blue Hill in Manhattan and Blue Hill Stone Barns in Westchester county, NY. Barber has been serving celtuce, while it's in season, on his tasting menus for years. Barber has credited Jack Algiere, the farm director at Stone Barns, with "discovering" celtuce.

The West Coast branch of celtuce devotion seems to have arisen separately, through Josiah Citrin of fine dining temple Melisse in Santa Monica. Citrin says that, three or four years, ago, he was making his regular rounds at the Santa Monica Farmers Market when Romeo Coleman, the owner of Coleman Family Farms in Carpenteria, told him that he'd started growing a new vegetable, celtuce, and asked if Citrin would like to try it out. Citrin had tried it once before, at Le Meurice in Paris, with caviar, and liked it, so he gave it a go. Citrin says he quickly grew to love its "earthy, yet vegetal" flavor and its versatility.

"We've done all different things with it: from slicing it thinly to dicing it to roasting it to pickling it... using little brunoise of it as a garnish," he said. "We puree the leaves and put them in sauces and panna cottas. It works well with poultry, fish and meat -- and on its own as a vegetable course! I love it."

Celtuce, in one form another, can now be found on the menu at Melisse almost every single night. Citrin described it as something of a signature of his cooking. But as distinctive as his use of celtuce is, Citrin wishes more chefs would embrace it; he said he often encourages his peers to give it a try.

"I started trying to get more people to use it, so Coleman could grow enough to make it worth the time and space it takes up," Citrin explained. "So I'm always telling people to buy it."

Celtuce, in other words, is a great example of the vicious cycle that keeps many obscure types of produce obscure: it's not popular enough for many farmers to grow, so it's not widely distributed, which keeps people from being able to try it, which keeps it unpopular. The flip side of that issue, though, is that if the animal spirits of the food world do elevate celtuce to bonifide trendiness, the demand of diners and shoppers could make it widely available. Just look at what's happened to pork belly and kombucha over the past few years.

In the meantime, home cooks (and restaurant chefs) are going to have a hard time heeding Citrin's call. If you're determined, three places to look for celtuce are the Santa Monica Farmers Market, the Union Square Greenmarket in New York and Chinese grocers across the country. And once you've tracked down some raw celtuce, check out the nice guide to cooking it that Food52 published in October.