To watch an Apichatpong Werasethakul film is to be lulled into a dream. His latest film, Cemetery of Splendour, which premiered at Cannes this week, immerses you in a surreal, and yet real, world on the line of wakefulness and sleep: literally a hospital (once a schoolhouse), in the Thai town of Khon Kaen, where 40 soldiers are interned for "sleeping sickness," occasionally waking only to tumble into slumber, even mid-meal. Jenjira, a middle-aged woman with a damaged leg, takes care of one of these sleeping soldiers, a comatose man named Itt. For much of the film, she is patiently kneeling by Itt's bedside, and caressing his hand.

The spectator drifts into a magic quiet state with the palm trees swaying in the windows, the cicadas chirping, the sounds of the fan. At one point, a woman comes to the hospital to teach mediation: "Feel the energy of the stars," she says soothingly. "And bring that energy inside you." As she spoke, I did the same in my chair.

The surreal aspect is upped step-by-step. A pretty young medium comes and communicates with the unconscious of the soldiers, confiding to Jen that the soldiers' souls have been taken by a warrior emperor to fight his battles, one thousand years before. The hospital, she states, is built on the remains of a cemetery of kings. Later this winsome medium takes Jenjira through a forest, pointing to the leafy ground: The site, she says, of palace rooms, which the sleeping Itt seems to have mapped out with strange squares and circles in a notebook. In another scene, Jenjira travels to pray at a shrine, laying down figurines as offerings. Two young girls come to thank her for her offering; they are princesses of the shrine, they tell her. 1,000-year-old princesses. Indeed, they are dead. Jenjira lifts an eyebrow. 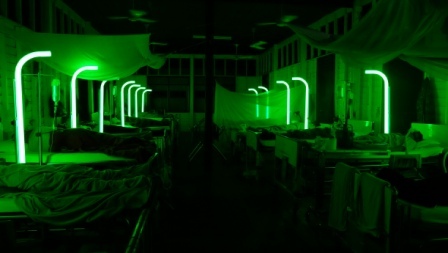 At points, the film becomes a series of sublime installation pieces, playing with color and light to enhance the limbo of dreaminess. My favorite sequence is that of a series of shots of the lit town at night: a neon light over a bus-stop, illuminating a poster of a wedding studio advertisement, and the night "therapy" lights on the sleeping soldiers (designed by the director), that look like long fluorescent loops and change from blue to green to red.

I also like the random images that don't make sense. A machine in the lake that spits up brilliant drops of water. A giant amoeba floating in the sky. The men at the side of the lake who suddenly stand up and move in various formations. A movie theater where, at the conclusion of the film, the entire audience stands up, as if in military salute.

The director has noted that many of the images in the film are those of his own memories in this town: the local movie theater, the school classroom we see in ruins, the brightly lit night market where the medium and Jenjira chat and eat. A Cemetery of Splendour is a collage of his native Thailand, the layered memories of the past, both his own and that of the nation.

Still, there is something unsettling about this dream. Everyone seems to be waiting. But waiting for what? Something -- beyond cemeteries -- is buried under the surface. While the images are serene and whimsical, and the film an exquisite pleasure to watch, I intuited a disturbing subtext to this hynoptic world -- especially since Apichatpong Werasethakul introduced the premiere, on stage, by speaking about how difficult it was in Thailand now, living under a dictatorship.

I met with the director to discuss. Five years before, we met to discuss his Palme d'Or winner Uncle Boonmee Who Can Recall His Past Lives, and enjoyed a whimsical brainstorming about the images in his film. 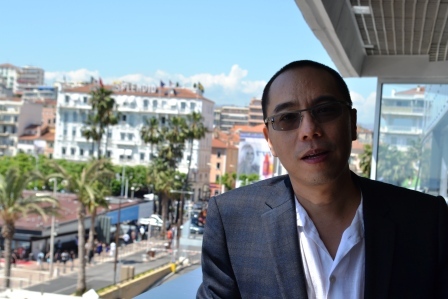 This time Apichatpong Werasethakul was more serious and pointed.


Could you please explain the contemporary context of Thailand, for a non-Thai audience?

Thailand has a lot of coup d'etats, repeatedly. Every time it happens a lot of people die; the last one was just last year, in May, when the military took over. Now, if you say something against the government, they will convoke you to "Attitude Adjustment". You have to sign something that says you will not say anything again.

Why this emphasis on sleep and dreaming in your film?

I have been interested for the last five years in sleeping and dreaming. For me, the act of sleeping is an act of escape, and that is what is going on now in Thailand: One wants to escape from the country. Sometimes you feel very powerless, in that all you can do is go away. I work on many projects, art projects. Sometimes you cannot deal with reality, and you don't know if it is a dream. Sometimes the situation in Thailand is so absurd and so violent that I feel threatened...

There are a lot of random elements in the film, that don't entirely make sense. Could you please explain, for example, why everyone suddenly stands up to salute in the theater?

Because we are always standing up in Thailand! We have to stand up at eight in the morning for the National Anthem.

Why the palace in the forest? Why the cemetery under the hospital?

Thailand is a young country, with many layers of civilizations: the Kingdom of Laos, the Khmer of Cambodia. I want to present those layers of history. We don't live in only one reality, but in different layers of memories. I want the film to reflect on and lament the ruins of past kingdoms. In Thailand, we do not know the roots of who we are. We have been taught propaganda history in school: "We are the best," etc. Did you note that image in my film of the bas relief of soldiers? It was a wall created to commemorate a prime minister who died a long time ago, Sarit Thanarat. He was a total dictator. He embezzled a lot of money. Along the way, he killed people. The town is still celebrating him!

Your film, like your previous films, has ghosts and other supernatural elements...

In this region of Thailand, we are very superstitious. We are Hindu, Animistic. You believe in the invisible. People live in the fantastic. I will give you an example: A road once cracked in the village. It became a very strange shape. People put candles on the crack and started to pray. They believe in the spirit; they need to worship the invisible.

But do you believe in the other-worldly elements in your film: The ghost princesses who come to Jenjira, for example?

(AW laughs) Oh, I think it is all nonsense. For me, it is a joke. But the character is ready to believe they are phantoms. Many Thai people believe in phantoms -- it is so funny how people are ready to believe in anything. But in my film, there is no judgement. As for me, I am interested in the different parallel universes, of time and space.

What is that machine spitting water bubbles in the lake, and why do you have such a lengthy close-up on it?

(AW laughs) Oh, that is a water propeller, a machine to keep oxygen in the water, for the equilibrium in the water, so it does not go bad. Why did I put it in? Oh, I grew up with it; it was always there in the water. And the soldiers are like the fish: They, too, need oxygen. Water is life, the cycle.

What is everyone waiting for in this film?

They are waiting to wake up.