In my new book, Unlearning Liberty: Campus Censorship and the End of American Debate, I wanted to include a section with all of the pictures that have been the cause of censorship, controversy, or punishment on campus. Unfortunately, by the time it came to print the book, we had way too many to include them all. But my book's loss is your gain! Here are my top 10 censored, banned, or otherwise kerfuffle-causing images on campus. (Spoiler alert: the title is more than a little tongue-in-cheek. I think you'll be surprised by how tame these "forbidden" images are.) 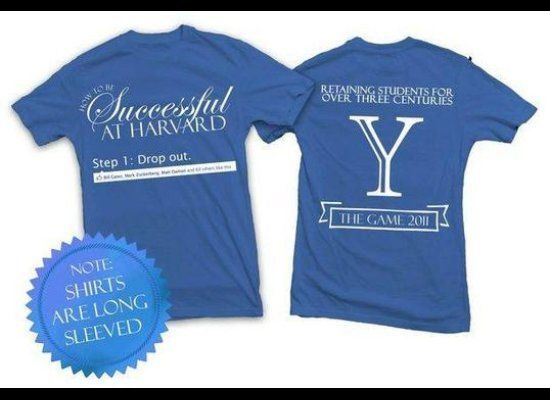 1 / 10
Yale University: Harvard Dropouts T-Shirt Refused
Perhaps out of determination to sap as much fun out of one of the nation's oldest sporting rivalries as possible, Harvard shot down the Yale Freshman Class Council's (FCC's) approved design for the T-shirts honoring the storied annual football game between the rival schools. For the 2011 game, the FCC selected this design poking fun at Harvard's famous dropouts, parodying Bill Gates, Matt Damon, and Mark Zuckerberg as "liking" the design. In a somewhat surreal decision, Yale's licensing office told the FCC that it had to run the design past Harvard's licensing office -- <a href="http://www.thecrimson.com/article/2011/11/17/yale-shirt-trademark-facebook/" target="_hplink">which in turn killed the design</a>, stating that it would not "permit the use of Harvard's trademarks with third-party trademarks or celebrity names." In other words, Yale required its students get permission from the target of its satire before satirizing them, giving the butt of the joke veto power over the joke. The FCC removed the names from the final design (and Harvard trounced Yale, 45-7).