As a Los Angeles resident-artist of 63 years, I was glad to see articles in the LA Times about the controversy at the Smithsonian over the censorship-removal of David Wojnarowicz's video from an exhibit at the National Portrait Gallery.

For anyone who is not familiar with this incident, G. Wayne Clough, head of the Smithsonian, ordered the removal of Wojnarowicz's video which the artist intended as an anguished tribute to his partner who died from AIDS in 1987. The Smithsonian bowed to select Republican politicians and conservative groups (most of whom, interestingly enough, may not have actually seen the exhibit), but were upset because the video contained an 11-second segment showing ants crawling on a crucifix.

It is important, however, for the press and the public to realize that this is not the first such incidence of censorship action taken by the Smithsonian. As an artist whose work has been the subject of a Smithsonian censorship attempt -- and whose colleague was censored -- allow me to provide a brief history.

In 1994, an exhibit on the Tongass rainforest of Alaska (for which I was both curator and a participating photographer) was preparing to open on Earth Day at the National Museum of Natural History. The exhibit had been crafted throughout the previous year by the Smithsonian Institution Traveling Exhibition Service (SITES), and SITES was intending to circulate it nationally after the DC opening.

A complete list of images, captions, and all text had been sent to the Alaskan congressional and senatorial offices six months prior to the opening for "approval", a concept I found surprising as I still don't get where any congressional or senatorial offices should have to approve anything the Smithsonian exhibitors, researchers, and confirming science panels have already vetted. Clearly, it was being done for political purposes as previously my Aperture book, The Tongass: Alaska's Vanishing Rain Forest (1986) helped to pass the Tongass Timber Reform Act (1990), the largest timber reform bill in the history of the U.S., and I was much disliked by the pro-timber Alaskan delegation of Ted Stevens, Frank Murkowski and Don Young. 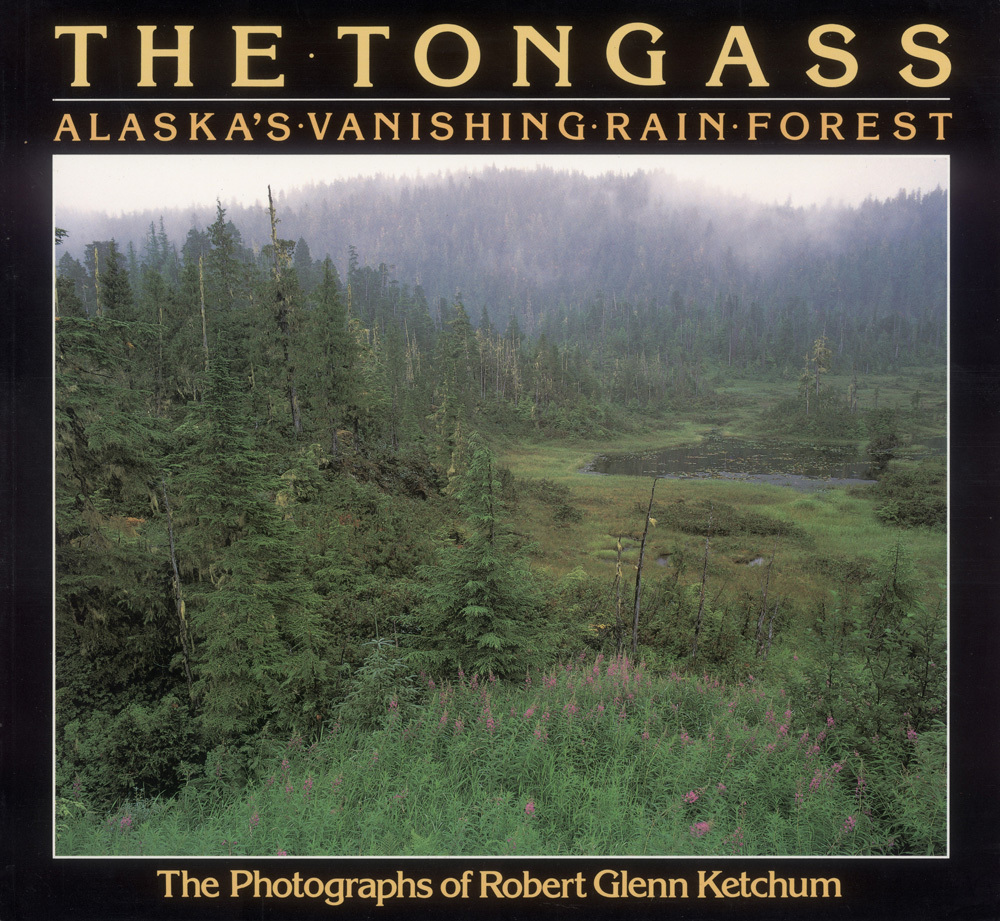 After two weeks of work to fully install the Tongass exhibit, just two days before the Earth Day premier, both the offices of Senator Ted Stevens and Senator Frank Murkowski came back to the director of SITES and demanded that certain pictures be removed from the exhibit and that some text panels be changed. Both offices put forth new scripts; incidentally, the proposed-changes-script from Frank Murkowski's office had over 100 misspellings including, "Grissly bear".

When the SITES Director asked me to make these changes she suggested that I should agree to do so "as I would not want to imperil Smithsonian budget funding for the sake of one exhibit". This was clearly a reference to her concern that Senator Stevens might use his powerful Senate Appropriations committee to punish the Smithsonian institution if the exhibit was not altered to suit the Alaskan delegation.

Coverage appeared in all three papers the next day, and we never heard from those political offices again. Hank Burchard of the Washington Post states in his follow-up article, "Alaska's Rewritten Rainforest", that SITES "obviously went to great lengths to avoid anything controversial". The show opened as originally planned on Earth Day to a reception of 850 people dining on southeast Alaskan wild cuisine, and the SITES Tongass show traveled for many years being seen by large audiences and to great success.

This was not the only time the Smithsonian was involved in suppressing art due to the pressure of political influences. Some years later, an exhibit of photographer Subhankar Banerjee's photos about the Arctic National Wildlife Refuge was subjected to censorship, as well. Incidentally, the Los Angeles Times published a major article about it, "Heat Turned Up on Arctic Exhibit?" Subhankar's images showed the richness of the refuge's 1.5-million acre ecosystem, an area that Senate Republicans referred to as "flat white nothingness" since they wanted to allow oil exploration there.

On March 19, 2003 Senator Barbara Boxer showed some of Subhankar's photographs, and ultimately held up his book about the refuge, Seasons of Life and Land, in Senate chambers, suggesting her senatorial colleagues should read it to understand what was at stake in the battle over the refuge. 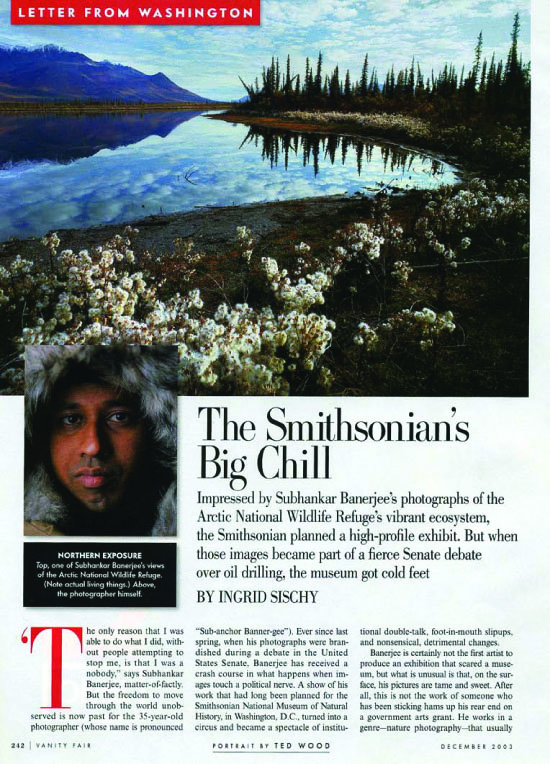 That gesture triggered the wrath of the Alaskan delegation once again, and Senator Ted Stevens in particular.

In the following two weeks, Subhankar was informed that although there was much pressure to cancel his exhibit, it would still be displayed, however dramatic changes were made to it. The exhibit was then de-installed from the main floor gallery at the National Museum of Natural History prior to the opening, and subsequently placed in the basement where few would see it. In addition, all of his captions were removed.

This sordid history of political meddling and resulting Smithsonian censorship has not been a press secret, and was clearly detailed by Ingrid Sischy in an excellent 9-page article in Vanity Fair, "The Smithsonian's Big Chill", December 2003, so this is hardly breaking news.

Another instance of political interference with a Smithsonian exhibition suggests historical revisionism, and resulted in a significant job loss. At the National Air and Space Museum, an exhibit was installed about the Enola Gay, the infamous plane used to deliver the atomic bomb dropped upon Japan. In that exhibit, a direct quote from President Dwight D. Eisenhower suggested the second bomb on Nagasaki was unnecessary overkill and probably should not have been dropped. This offended veteran's that were part of that flight. They took their dissatisfaction to the office of Senator Ted Stevens, who summarily arranged to have the quote removed from the exhibit. Shortly after, the director of the National Air and Space Museum was also fired.

Given this established history of censorship at the Smithsonian, the recent articles in the LA Times raise a new question in my mind. Since censorship attempts have occurred in the past, why do these current authors only react indignantly now? When you read their columns, it seems that they believe the censorship of Wojnarowicz is the first incident of this kind.

To me this suggests that these authors are either ignorant of the past, despite it being widely documented, OR there is another kind of censorship at work here. Think in terms of Art with a capital-A, and art without a capital-A. Do these writers view censoring a video at the National Portrait Gallery ('Art' with a capital-A) more significant than censoring the words of an American president at the National Museum of Air and Space? Or that Smithsonian censorship attempts as related to my work, and Subhankar's, are less important because we take pictures of rocks, trees and animals, and "post-modernists" do not consider our work Art with a capital-A?

I hope that is not true. There are no "lesser" artists, nor institutions, in this debate about the Smithsonian's politically-driven censorship. The Smithsonian Institutions should not be so easily compromised by the manipulations of select politicians and small interest groups. Period.

I ask that these journalists and critics consider that those of us who have chosen to use our art to defend the habitat and life systems that support all humanity just may turn-out to be seen historically as some of the more important artists of this past century. As a founding fellow of the International League of Conservation Photographers (iLCP), I can say that within this collective group some of the most important work of our age is being done -- work that is actually making a difference. My colleagues have, and are still, pioneering the ways in which we "see" photographically. They are also actively changing visioning technology, and intellectually they are working at the cutting-edge of real public influence. They do their work for reasons of purpose, rather than mere "Artful" cleverness.

I appreciate newspress concerns about David Wojnarowicz's censorship, yet there is a history of this behavior at the Smithsonian for which the public needs to be made more aware. Censorship is a threat to all forms of artistic expression and I do not want to think that it is only considered significant at certain museums and about certain artists but irrelevant at "other" museums, and artists the authors may think less of.