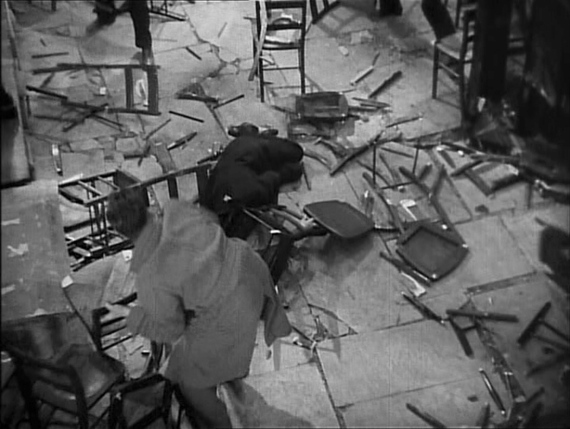 The Man Who Knew Too Much

"[P]eople are always more loyal to their tribal group than to any abstract notion of the "truth" -- scientists especially. If not they are unemployable. . . . The problem is that many fine scientists recognize genuine difficulties with the "standard model" of evolution, so to speak. However, most lack conceptual tools to solve the difficulties they legitimately recognize. . . . . Zoologists often display their dangerous ignorance, they play with 1/5th of the deck in biology. They belong to a thought style I don't share." -- Lynn Margulis

In an attempt to do damage control, one of the organizers of the Royal Society paradigm shift meeting (not Denis Noble) sent me an email, which follows, asking that I stop referring to the Royal Society meeting as such. Why? Because he speaks for scientists who think they can control the scientific discourse as it was controlled at the time of Darwin.

They are embarrassed. They don't want to be seen as sitting on scientific evidence and feeding the public old science -- which they are -- and so they circle the wagons and deride those outside the circle who dare to point out that there is crucial evidence they are conveniently tucking away, that they are gaming the system as a result. The arrogance is so flagrant that they can't even remember it's their job to serve science, and the public that funds science.

The late science and technology historian David F. Noble in an interview with me once described one way the US public, for instance, continually gets ripped off by the politics of science, a situation the public is still largely in the dark about:

"I make very little distinction between the scientific community and the corporate community. Those are very close links. . . . In 1980, the Birch Bayh-Robert Dole amendment to the Patent Act was passed. This is another watershed. The Bayh-Dole amendment laid to rest the controversy that began in WWII over the patenting of publicly-funded research. Up until 1980, it remained ambiguous.

What the Bayh-Dole amendment said was that the universities automatically now own all patent rights on publicly-funded research. What that meant was that universities were now in the patent-holding business and they could license private industry and in that way give them the rights over the results of the research funded by the taxpayer. It was the biggest give-away in American history."

David Noble advocated a repeal of Bayh-Dole. I wonder what Bernie Sanders thinks?

In the email from said scientist on the organizing committee for the upcoming Royal Society meeting, he refers to the extended synthesis as if it's written in stone and the only option in town when it is largely rehash of eight-year-old Altenberg!, a rerun of science that revolves around plasticity and niche construction.

The world is awash with the latest scientific evidence that anyone and everyone can now access on the Internet. Science in that sense has been democratized and everyone who wants to be in the know can be -- including the Royal Society organizing committee -- and can have an educated opinion.

It's beginning to look as if the responsibility for the success of the Royal Society meeting rests with its distinguished audience.

I remain optimistic that it will be a productive meeting, although that may be due to registered attendees making a point by canceling their tickets because they're turned off by the list of speakers, walking out of the gathering en masse or grilling speakers until they finally admit they've got their heads in the sand.

Following are comments from University of Chicago microbiologist James Shapiro about the timidity of scientists regarding new science, excerpted from my book The Paradigm Shifters. Shapiro is one Royal Society evolution invitee who will be touching on non-Darwinian concepts: symbiogenesis, hybridization, natural genetic engineering. I understand he'll also be sneaking in a slide on viruses.

Shapiro admits he's not an expert on viruses and the experts on viruses I've spoken with, like Luis Villarreal and Eugene Koonin tell me they have not been invited. This makes no sense since Koonin is one of the most cited scientists in the world (H-index of 163) and has told me: "So indeed, the new understanding of evolution needs to integrate what we now know about viruses and virus-host interactions, which from my own perspective has been absolutely one of the key factors of all evolution since the emergence of cells -- well, actually even before the emergence of cells."

"[Thomas] Kuhn captured something very quintessentially human about the scientific enterprise: that you inevitably never capture nature as it is. You only capture a portion of it that you can figure out and theorize about. And you go on exploring that portion of nature. For some period of time the explorations are extremely productive. But over time and as technology develops, partly as a consequence of what the scientific enterprise is doing, new phenomena come up and can't be explained any longer in the same way. In the end there are always a group of people who defend the existing belief system more than is justified by the empirical observations. Tension arises between those who say the empirical observations are telling us something different and those who defend the intellectual framework that led to those empirical observations. . . .

The way I look at it, most of my colleagues exhibit a schizophrenic attitude towards new ways of thinking. . . .The experimentalists do the research and they talk about it in appropriate new ways. In practical terms they are talking in a totally different way about how genetic change happens than fits the conventional wisdom.

However, if you say to them you're doing non-Darwinian science, they say, "No, what are you talking about? We're doing Darwinian science." Because, in their minds, "Darwinian science" is synonymous with non-supernatural scientific exploration of evolution and genome change in biology."

And here is the email from said scientist on the RS organizing committee doing damage control:

"Could I request that you stop referring to the forthcoming RS-BA meeting ("New Trends in Evolutionary Biology: Biological, Philosphical and Social Science Perspectives"), and to the extended evolutionary synthesis, more generally, as in some way advocating a "paradigm shift". Such language is both misleading (the vast majority of scientists working towards an extended synthesis do not seek revolutionary change in neo-Darwinism) and counterproductive (such talk undermines calm scientific discussion by creating an unnecessarily emotive and antagonistic atmosphere). I view the Kuhnian model as superseded long ago: the data suggests that sciences rarely if ever change through "revolutions". Lakatos' framework of "research programmes" offers a more up-to-date, accurate and useful conceptualization of (gradual and progressive) scientific change. The extended evolutionary synthesis is best regarded as an alternative research programme, entirely complementary to orthodox evolutionary biology. Talk of "paradigm shift" gives the false impression that the differences amongst evolutionary biologists are far more extreme than they actually are. . . ."

I have registered for all three days of the Royal Society meeting. . .