iTunesconnect ticketed my new novel The Love of My (Other) Life, denying it access to the unlimited pleasures of worldwide distribution through iTunes. The reason: the cover art was deemed "inappropriate."

Truthfully, it is a saucy cover: a woman's slim, sinuous back, dropping into the juicy plumpness of her ass. However, as I pointed out in an email to the iBookstore, there isn't even real nudity, just the fleshy part of a derriere.

This cover is not explicit. It's artful, taken from a black-and-white photo. The faceless woman's back spirals around a bit, as if she's turning with an unseen, but beguiling, smile. You can see more any day on the side of a city bus, or watching Jersey Shore. It's what's suggested that is suggestive, eg, inappropriate. This is a lush, sweet ass, begging to be fondled. By the eyes, and by whatever else.

This is the invitation of eros. I think it's still a forbidden frontier, even in our over-exposed, boringly unsubtle, 50 Shades of Grey culture. It's all too confusing, this softness and sweetness, the playful surrender of a woman to her lover. Not because he's spanking her and tweaking her nipple and she's a hapless virgin at the mercy of some kinky damaged billionaire. But because sex is neither politically correct nor is it hapless.

For many women, falling off the cliff into bliss requires boneless surrender. It's part of the intrinsic yin nature of femininity. It's one of the great joys of heterosexual femaleness, to find a man you feel that way about, that you want to give over totally to him and let yourself dissolve completely, from the inside out.

So this cover which suggests so much and shows so little, relatively speaking, is far more objectionable than the rage-filled, violence-promoting, obscenity-spewing lyrics that populate certain sectors of music found on iTunes. Do you notice how often those songs focus on hitting and denigrating women and characterizing them as "whores?"

What is it about women's sexuality that produces such anxiety?

What's ironic about iTunes' censorship of my novel is that some of my readers complain that The Love of My (Other) Life isn't raunchy enough. One website posted, "This book was not nearly trashy enough for my taste, but I kept reading, because I am just like that. I did enjoy the nerdy science jokes, and like having to google decoherence theory."

Certainly this book earns its cover. There is an underlying leitmotif around asses. It's on the sly side and doesn't slam the reader upside the head; it teases throughout the story. The sex is fade-to-black, but it occurs, and the main character enjoys it fully. She herself bears a heart-shaped birthmark on her sacrum, just above the cleft in her buttocks.

Here I am, defending a story's sensuousness, when its cover was rejected by one of our iconic cultural institutions for being too sensuous. Perhaps it is too sensuous, because it is seductive, not pornographic. Everyone would rally around the right to freedom of expression in pornography. But what can be said when a woman freely, deliciously offers herself? When she goes after what she wants by drawing it in? When she's not an object but her own subject? 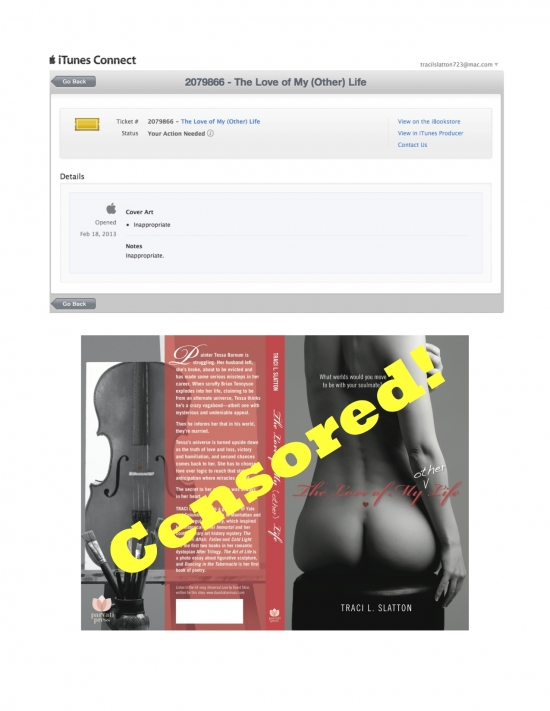