Pew revealed the findings of a study this month that shows some 2.5 million U.S. Latinos changed their race category from “some other race” to “white” between the 2000 and 2010 censuses.

The news prompted The New York Times and Slate to speculate that perhaps the United States isn’t headed toward a majority-minority status as many envision, given that, in the words of Slate, “a surprising number of Hispanics opted to identify themselves as ‘white’ in the last census.” Both articles say that the tendency toward identifying as white may mark an evolving pattern of assimilation into whiteness on the part of light-skinned Hispanics -- an idea disputed by Latino Rebels, who questioned the non-Hispanic authors' understanding of Latinidad.

The idea that Latinos will swell the ranks of the whites is an interesting theory, and perhaps even accurate, but the statistics released by Pew hardly support such a sweeping statement. What’s equally if not more likely is that the study reveals less about an evolving Latino identity or pattern of assimilation and more about the Census’s admittedly faulty system for classifying Hispanics.

The study reported by Pew this month isn’t the first indicator that more Latinos are identifying as white on the Census. The total share of Latinos self-identifying in the Census rose from 47.9 percent in 2000 to 53 percent in 2010.

But before jumping to the conclusion that Latinos are selecting “white” because of shifting racial ideas or assimilation, let’s consider a few characteristics of the Latino community.

First off, some Latin Americans, and therefore, some U.S. Latinos, are European descendants and phenotypically white. Their racial identification has little to do with assimilation -- they were white and Latino from the time they were born, the same way a German descendant is white and European.

It does seem clear, however, that a large swath of Latinos of mixed race identify themselves as “white” on the census. But seeing mixed-race people identify as white is not unique to the United States, nor does it, in and of itself, demonstrate a uniquely American process of racial assimilation. In Latin America the same phenomenon occurs. Though Latin America did not generally experience the same sorts of rigid, legally mandated racial segregation characteristic of the United States, the region still suffers from racism and the legacy of creating a coerced labor pool made up of either black slaves or indigenous workers.

The fact that people of mixed heritage often identify as white in Latin America is well known and skillfully documented by social scientists Edward Telles, René Flores and Fernando Urrea-Giraldo. The researchers surveyed thousands of respondents in Mexico, Peru, Colombia, Brazil and Ecuador, asking them to identify their race and then collecting socioeconomic data about them, including level of educational attainment and household income. At the same time, the researcher used a palette with 11 shades running from off-white to nearly black to identify the respondents’ skin tone.

When ordering the socioeconomic data by self-reported ethnicity, Latin America seems like a more or less racially democratic place, in which people of color appear to earn comparable salaries and attain similar levels of education. When ordered by observed skin color, however, the data reveals a sharp, repetitive pattern of inequality, in which earnings and education plummet as the respondent’s skin color darkens. The research not only illustrates the fact that Latin Americans of mixed heritage have a tendency to self-identify as white, but it also shows the stark reality of the region’s racial inequality.

Beyond these cultural issues that may help to explain why U.S. Latinos self-identify as white in large numbers, it appears that the census itself is partly responsible. As we’ve pointed out before, the reason for the confusion on the U.S. Census has little to do with evolving ideas about race among Latinos and a lot to do with the limited options available to Latinos. After claiming Hispanic ethnicity on the Census, respondents get to select from the following choices: white, black, Native American, Asian/Pacific Islander or “some other race.” Given those options, it isn’t surprising to see that a lot of Latinos would choose white. Despite the rush to draw conclusions about Latino assimilation into whiteness, Pew was clear about this when reporting the statistic.

“By some measures, the data provide more evidence of Americans’ puzzlement about how the census asks separately about race and ethnicity,” Pew wrote, though adding that “there could be other reasons, too, such as evolving self-identity or benefits associated with being identified with some groups.”

That fluidity may suggest a lot of things, including a pattern of Hispanic assimilation into whiteness. But it just as likely reveals, once again, the longstanding flaws in the way the Census Bureau asks Hispanics about race. Hopefully the changes they’re working on for 2020 will give us a more accurate picture in the future.

PHOTO GALLERY
Latinos Who Don't Get A Race On The Census 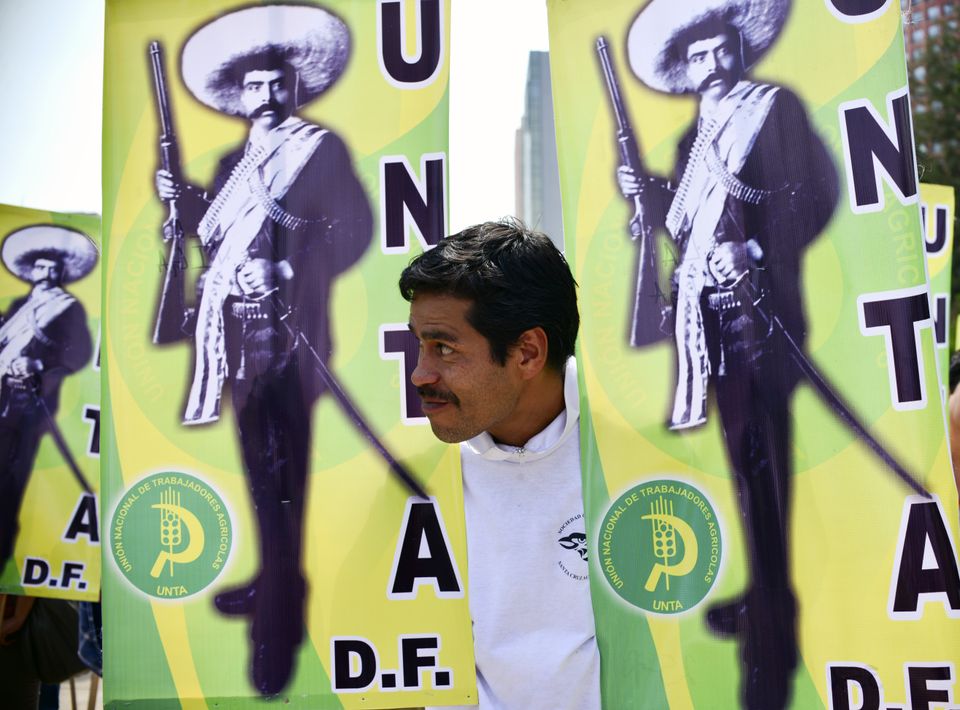 1 / 4
Mestizos
People of mixed European and indigenous descent make up the majority of the populations of Mexico and Central America. People of Mesoamerican descent, in turn, make up the majority of U.S. Latinos -- but they don't have a box to check for their race on the U.S. Census.
Supporters of the left-wing Party of the Democratic Revolution (PRD) protest against a constitutional reform proposed by Mexican President Pena Nieto of the Institutional Revolutionary Party (PRI) that would allow state oil monopoly Pemex to partner with