As the country went to the polls this past fall, the meme that America is a "center-right" country surged. Between the last week of October and the 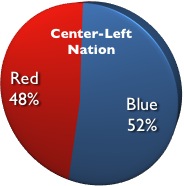 first week of November, the number of times that phrase appeared in the print and broadcast outlets tracked by Nexis grew an astonishing 168%.

While Republicans used those words' sudden currency to clamp a ceiling on the meaning of Obama's victory, Democrats fought back with myth-busting poll results about the political parties that Americans identify with, and about peoples' positions on campaign issues. 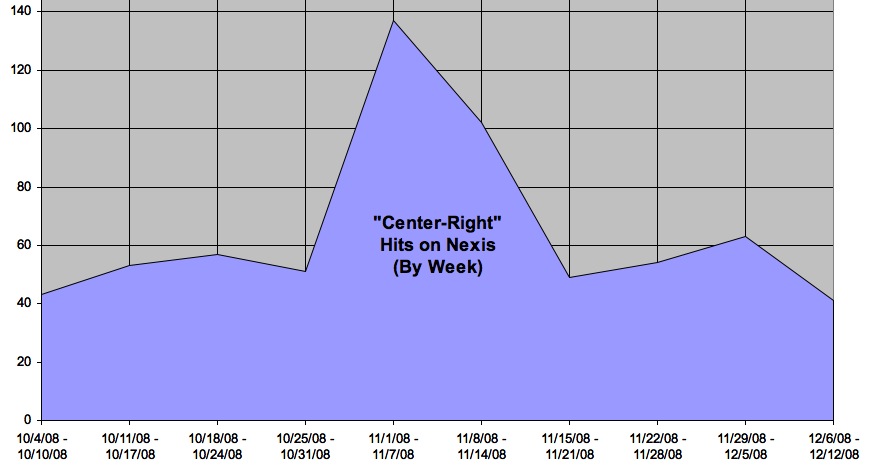 I have some data to add to that debate, and it drives a final stake into the center-right talking-point.

In August 2008, instead of asking people what party they're for, or which candidate's positions they agreed with, we - the Norman Lear Center and Zogby International - asked a scientific sample of adults to look at 21 pairs of statements. Each pair dug down to core political values. Each pair had a red (or conservative) answer and a blue (or liberal) answer.

What did we find out?

On some issues, the country has a lopsidedly blue point of view. For example, 77% of our respondents agreed that "it is our duty to help the less fortunate"; 76% said that "government is too involved in regulating morality"; 76% believe that "corporations generally act without society's best interests in mind."

On other issues, red answers were in the majority. Seventy-three percent believe that "freedom is more important than equality"; 69% said that "government generally creates more problems than it solves"; 67% agree that "evolution should be just one part of the science curriculum in the schools."

Here's what we learned when we calculated the average number of respondents who supported the blue position, and the average number supporting the red position: Fifty-two percent were blue, and 48% were red - a finding that's significant beyond the poll's +/- 1.8% margin of error. The country leans to the left, not the right.

(If you'd like to see all 21 pairs of political values questions, and how people answered, here's where to find that.) 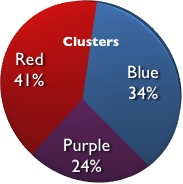 A surprisingly small number of the 3,167 people in the survey gave answers that were all blue or all red. Instead, almost all the adults polled offered mixtures of red and blue answers. And when we analyzed those mixtures, we found that they formed three statistically significant clusters, which we called red (41% of the sample), blue (34%), and purple (24%). (The poll's findings omit the country's 5% of self-identified libertarians, who are all over the map on the issues.) 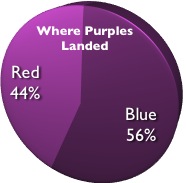 Purples - the nation's center - leaned to the red end of the spectrum on eight issues, and they leaned to the blue end of the spectrum on 12 issues. (They were split 50/50 on one issue: whether religion should be left out of public life.) Over all, 56% of the purples identified with blue answers, and 44% of the purples identified with red answers. In other words, the center of the country leans to the left, not the right.

What's more, reds didn't always endorse the red position, and blues didn't always pick the blue position. There were four instances where the majority of reds endorsed the blue position (including the 55% of reds who said that "foreigners immigrate to America for the chance to work for a better life"), and only one instance where blues endorsed a red position (52% agreed that "freedom is more important than equality").