We've seen behind the curtain, as the Fed waved its magic liquidity wand over Wall Street. Now it's time to enlist this tool in the service of the people.

Many of us were, shall we say, if not surprised, taken aback when the Fed had $80 billion to invest -- to put into AIG just out of the blue. All of a sudden we wake up one morning and AIG has received $80 billion from the Fed... So of course we're saying, Where's this money come from? "Oh, we have it. And not only that, we have more." 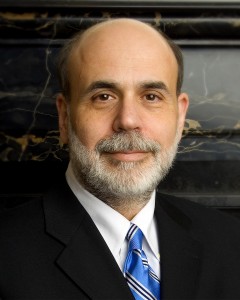 The stage magician smiles coyly and rolls up his sleeves to show that there is nothing in them. "Try $12.3 trillion," he says.

That was the figure recently revealed for the Fed's "emergency lending programs" to bail out the banks.

"$12.3 trillion of our taxpayer money!" shout the bemused spectators as pigeons emerge from the showman's gloved hands. "We could have used that money to build roads and bridges, pay down the state's debts, keep homeowners in their homes!"

"Not exactly tax money," says the magician with his mysterious Mona Lisa smile. "When did you have $12.3 trillion in tax money sitting idle?"

Not only did he not use "tax money;" it seems he hardly used "money" at all. He just advanced numbers on a computer screen, amounting to credit against collateral, replacing the credit that would have been advanced by the money market before the Fatal Day the Money Market Died. According to CNNMoney:

The Federal Reserve made $9 trillion in overnight loans to major banks and Wall Street firms during the Wall Street crisis... All the loans were backed by collateral and all were paid back with a very low interest rate to the Fed -- an annual rate of between 0.5% to 3.5%...

In addition to the loan program for bond dealers, the data covered the Fed's purchases of more than $1 trillion in mortgages, and spending to back consumer and small business loans, as well as commercial paper used to keep large corporations running...

Most of the special programs set up by the Fed in response to the crisis of 2008 have since expired, although it still holds close to $2 trillion in assets it purchased during that time. The Fed said it did not lose money on any of the transactions that have been closed, and that it does not expect to lose money on the assets it still holds.

Or so it is reported in the media.

The pigeons slip back up the sleeve from whence they came, a sleeve that was empty to start with.

The Central Bank as Lender of Last Resort

Where did the Fed get this remarkable power? Central banks are "lenders of last resort," which means they are authorized to advance as much credit as the system requires. It's all keystrokes on a computer, and the supply of this credit is limitless. According to Wikipedia:

A lender of last resort is an institution willing to extend credit when no one else will. Originally the term referred to a reserve financial institution, most often the central bank of a country, that secured well-connected banks and other institutions that are too-big-to-fail against bankruptcy.

The bank lends out some or most of the deposited funds, while still allowing all deposits to be withdrawn upon demand. Fractional reserve banking necessarily occurs when banks lend out funds received from deposit accounts, and is practiced by all modern commercial banks.

All commercial banks are insolvent. They are unable to pay their debts when they come due, because they have double-counted their deposits. A less charitable word, if this hadn't all been validated with legislation, might be "embezzlement." The bankers took your money for safekeeping, promising you could have it back "on demand," then borrowed it from the till to clear the checks of their borrowers. Modern banking is a massive shell game, and the banks are in a mad scramble to keep peas under the shells. If they don't have the peas, they borrow them from other banks or the money market short-term, until they can come up with some longer-term source.

Ann Pettifor writes, "the banking system has been turned on its head, and become a borrowing machine." Rather than lending us their money, they are borrowing from us and lending it back. Banks can borrow from each other at the fed funds rate of 0.2%. They get the very cheap credit and lend it to us as much more expensive credit.

They got away with this shell game until September 2008, when the Lehman Brothers bankruptcy triggered a run on the money markets. Panicked investors pulled their short-term money out, and the credit market suddenly froze. The credit lines on which businesses routinely operated froze too, causing bankruptcies, layoffs and general economic collapse.

The shell game would have been exposed for all to see, if the Federal Reserve had not stepped in and played its "lender of last resort" card. Quoting Wikipedia again:

A lender of last resort serves as a stopgap to protect depositors, prevent widespread panic withdrawal, and otherwise avoid disruption in productive credit to the entire economy caused by the collapse of one or a handful of institutions...

In the United States the Federal Reserve serves as the lender of last resort to those institutions that cannot obtain credit elsewhere and the collapse of which would have serious implications for the economy. It took over this role from the private sector "clearing houses" which operated during the Free Banking Era; whether public or private, the availability of liquidity was intended to prevent bank runs.

If all central banks do it, it must be okay, right? Or is it just evidence that the entire international banking scheme is sleight of hand? All lenders are insolvent and are kept in the game only by a lender-of-last-resort power given to central banks by central governments -- given, in other words, by we-the-people. Yet we-the-people are denied access to this cornucopia, and are forced to pick up the tab for the banks. Most states are struggling with budget deficits, and some are close to insolvency. Why is the Fed's magic wand not being waved over them?

According to financial blogger Edward Harrison, that might soon happen. He quotes a Bloomberg article by David Blanchflower, whom Harrison describes as "a former MPC [Monetary Policy Committee] member at the Bank of England but also an American-British dual citizen professor who is very plugged in at the Fed." Blanchflower wrote on October 18:

I was at the Fed last week in Washington for one of its occasional meetings with academics...

The Fed is especially concerned about unemployment and the weak housing market. . . .

Quantitative easing remains the only economic show in town given that Congress and President Barack Obama have been cowed into inaction.

What will they buy? They are limited to only federally insured paper, which includes Treasuries and mortgage-backed securities insured by Fannie Mae and Freddie Mac. But they are also allowed to buy short-term municipal bonds, and given the difficulties faced by state and local governments, this may well be the route they choose, at least for some of the quantitative easing. Even if the Fed wanted to, it couldn't buy other securities, such as corporate bonds, as it would require Congress's approval, which won't happen anytime soon. [Emphasis added.]

You don't need to understand all this financial jargon to pick up that a central banking insider who has sat in on the Fed's meetings says that for the Fed's next trick, it could and "may well" fund the bonds of local governments. Harrison comments:

The Fed can legally buy as many municipal bonds as it wants without congressional approval... This is a big story. Blanchflower is essentially saying that the U.S. government can bail out both the housing market via Fannie and Freddie paper purchases and the state governments via Muni purchases. And, of course, the banks get to dump these assets onto the Fed who will hold them to maturity. I guarantee you this will have a very nice kick since it is the states where the biggest employment cuts are.

A big story indeed, opening very interesting possibilities. The Fed could use its QE tool not just to buy existing assets but to fund future productivity and employment, stimulating the depressed economy the way Franklin Roosevelt did but without putting the nation in debt at high interest to a private banking cartel.

The Fed could, for example, buy special revenue bonds issued by the states to finance large-scale infrastructure projects. They might build a high-speed train system of the sort seen in Europe and Asia. The states could issue special revenue bonds at 0% or 0.5% interest to finance the project, which could be repaid with user fees generated by the finished railroad. The same could be done to build modern hospitals, develop water projects and alternative energy sources, and so forth. All this could be done at the same extremely low interest rates now afforded to the banks, saving the states enormous sums in taxes.

Wouldn't that sort of program be inflationary though? Not under current conditions, says author Bill Baker in a recent post. He notes that over 95% of the money supply is created by bank lending, and that when credit is destroyed, the money supply shrinks. The first round of QE did not actually increase the money supply, because the money printed by the Fed was matched by the destruction of money caused by debt default and repayment. To replace the debt-money lost in a shrinking economy, the Fed has already elected to embark on a program of quantitative easing. The question addressed here is just where to aim the hose.

Closing the Social Security Gap
Another interesting idea for QE3 was proposed by Ted Schmidt, associate professor of economics at Buffalo State College.
Writing
in early November, Schmidt anticipated the cut in social security taxes now being debated in Congress. Worried observers see these cuts as the first step to dismantling social security, which will in the future be called "underfunded" and too expensive for the taxpayers to support. Schmidt notes, however, that social security is a major holder of federal government bonds. The Fed could finance a $400 billion tax cut in social security by buying bonds directly from the social security trust fund, allowing the fund to maintain its current level of benefits. Among other advantages of this sort of purchase:

[I]t does not raise the gross national debt, because it simply transfers bonds from one government entity (the Social Security trust fund) to a semi-government entity (the Fed); and... it gives the Fed the extra ammo (treasury bonds) it will need when the time comes to restrain inflationary pressures and pull reserves out of the banking system. (It does this by selling bonds to banks.)

Schmidt concludes: "Enough is enough, Dr. Bernanke! It's time to inject the patient with money that gets into the hands of working people and small businesses."

The Fed's lender-of-last-resort power has so far been used only to keep rich bankers rich and the rest of the population in debt peonage, a parasitic and unsustainable endeavor. If this power were directed into projects that increased productivity and employment, it could become a sustainable and very useful tool. We the People do not need to remain subject to a semi-private central bank ostensibly empowered by our mandate. We can take our Money Power back.