A version of this article published earlier in Jewish Journal Boston

New York City - From the East Side to the West Side, from uptown to the Southern tip of Battery Park, there's still time to catch a dazzling array of must-see exhibits that illuminate centuries of Jewish art, history and culture. A quartet of outstanding eateries are the perfect accompaniment, two housed in the museums and others are nearby.

The First Jewish Americans: Freedom and Culture in the New World. New York Historical Society (170 Central Park West; through February 26, 2017) Visitors of all ages will be dazzled by the winter wonderland display of antique toys and trains in the entryway of this magnificent museum, the oldest in New York City. On the second floor, an eye opening exhibit traces the arrival of Jews in the New World and sheds light on the ways in which Jews were influenced by and left an enduring mark on the emerging nation. The show boasts more than 170 objects, many from the collection of Leonard Milberg, including rare early portraits, drawings, paintings, maps, books, documents and ritual objects - and two paintings by impressionist artist Camille Pissaro, born on St. Thomas and whose mother was Jewish. Milberg is a 1953 alumnus of Princeton University that now houses a large portion of his collection. 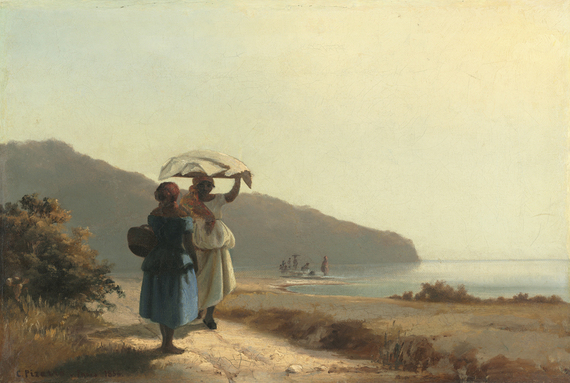 One remarkable highlight is a newly recovered late 16th century diary of Luis de Carvajal the younger (1567-1596). Born in Spain to a family of 'converso Jews' who converted to Catholicism, De Carvajal became a victim of the Mexican Inquisition. 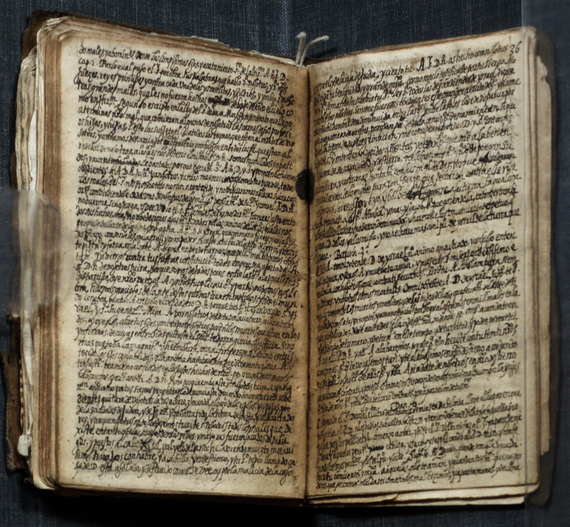 An inset of the autobiographical manuscripts of Luis de Carvajal the Younger, circa 1595, with devotional manuscripts. (Courtesy of the Government of Mexico, from the New York Historical Society)

Milberg, a savvy keen-eyed collector discovered the diary listed in an auction catalog.

"It was too good to be true. They must be either copies or forgeries," he recalled thinking at the time. He headed over to the gallery to get an up-close look at the manuscripts. "I thought they were extraordinary," he told The Times of Israel.

There's also a pair of delicately crafted silver torah filials by American-born Myer Myers, one of the most sought after silversmiths of his day. Other items highlight the ways in which women played a leading role in forging the early Jewish American experience. 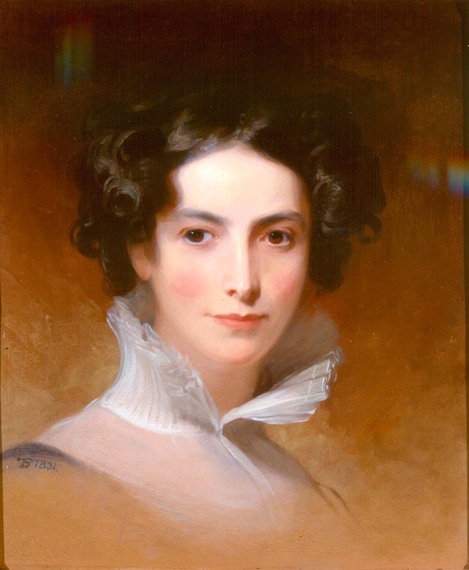 There are several paintings and a book by Solomon Nunes Carvalho, a noted Charleston-born portrait artist and groundbreaking photographer who accompanied John Fremont on his 1853 Fifth Westward Expedition across the Rockies. His little known story is told in the new documentary, Carvalho's Journey, made by award winning filmmaker Steve Rivo and distributed by the National Center for Jewish Film. 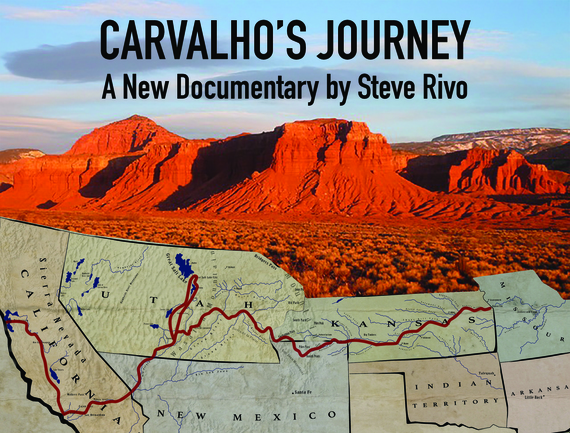 Jerusalem 1000 - 1400: Every People Under Heaven. The Metropolitan Museum of Art (1000 Fifth Avenue; through January 8, 2017) Step back centuries to the extraordinary medieval history of Jerusalem, a period when the Holy City was home to more cultures, religions and languages than ever before. The exhibit reveals this rich and multilayered religious, political, commercial and artistic history through some 200 works including a treasure of early 11th century gold coins discovered two years ago in Caesarea, a detail from a 13th century Qu'ran and examples of Reliquary Crosses, many with decorative inlays of gems. 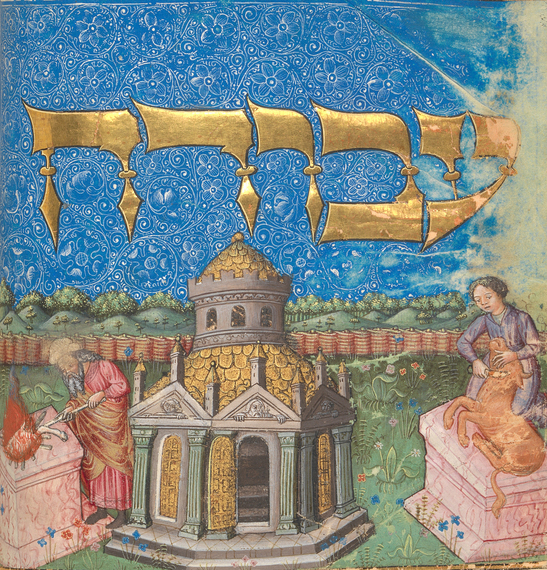 Illustration (detail) from The Book of Divine Service from the Mishneh Torah of Maimonides
Illumination attributed to the Master of the Barbo MIsssal, ca. 1457. Image courtesy of the Metropolitan Museum of Art

Interspersed with the historic displays are contemporary videos of sites in the city. Text panels make the point that there was a good deal of cultural interchange between the different cultures and religions.

Artful bites on the Upper West Side

From The New-York Historical Society, you can do no better than to experience Barney Greengrass, the original Sturgeon King. On a recent Sunday early afternoon, diners at the popular eatery and appetizer shop in business for more than 100 years, were ordering latkes in addition to the signature bagels, house-cured lox, smoked sable and more. 541 Amsterdam Avenue at 86th Street.

A few doors down, at 551 Amsterdam Avenue, is a new eatery Kirsh Bakery and Kitchen. In the bakery, Israeli co-owners, David and Anat Kirsh are serving up freshly made pastries and breads, coffees, teas. The duo are behind Zuni, a 24/7 brasserie in Jerusalem. It was impossible to resist bringing home the crusty, flavorful round loaf of wheat germ bread; an almond pastry being sampled burst with almond and was not overly sweet or sugary. 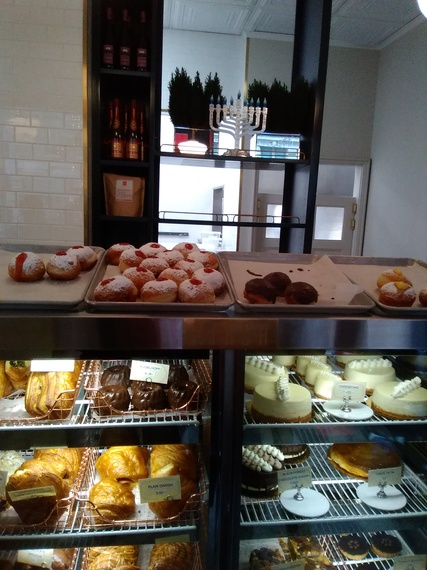 In December, the cases were filled with Sufganiyot, home made filled doughnuts for Hanukkah.

Fans of John Singer Sargent's portrait of Isabella Stewart Gardner at Boston's beloved Gardner Museum will relish the chance to see the artist's stunning portrait of Adèle Meyer, a wealthy British Jewish patroness of the arts and philanthropic supporter of women's suffrage and social causes for the poor. The lush portrait is making a rare appearance at the Jewish Museum, the first time it's been on view in the U.S. in more than ten years. The exhibition features other portraits, photographs and correspondence. There's also a kids' guide and programs and activities for kids. 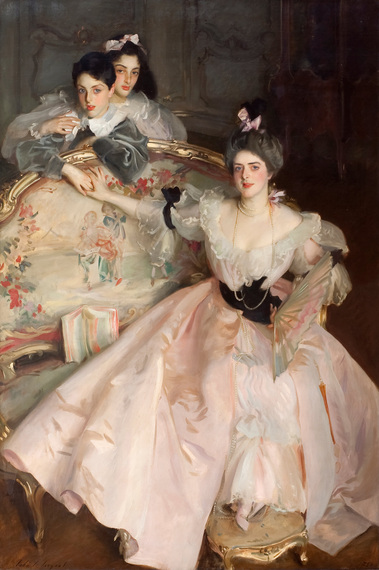 No need to travel to the Lower East Side for Russ & Daughters for a taste from the iconic Jewish appetizer store and newer cafe. Enjoy a bagel and smoked fish, or knishes, borscht, salads and much more in this kosher 70-seat, sit-down restaurant that also serves wine, beer and cocktails. There's also a take-out appetizing counter. Closed Saturdays. Russ & Daughters was the subject of The Sturgeon Queens, Julie Silver's delightful documentary.

Project Mah Jongg, through the end of January, 2017. The Museum of Jewish Heritage: A Living Memorial to the Holocaust. 36 Battery Park Place.

"Crack," "Bam," and "Dot." Generations of Mah Jongg players - and their children - will recognize the names of the tiles in this ancient Chinese game hugely popular among Jewish women of the mid-20th century. The lively exhibit includes cultural and historical items associated with the game and a recorded soundscape of the iconic clicking of the tiles. Visitors can even sit down for a game at the card table in the middle of the exhibit space.One display features the foods long associated with the game including a box of Joya brand chocolate covered Ring Jells, a Jello-mold, and a Mah Jongg-themed apron. 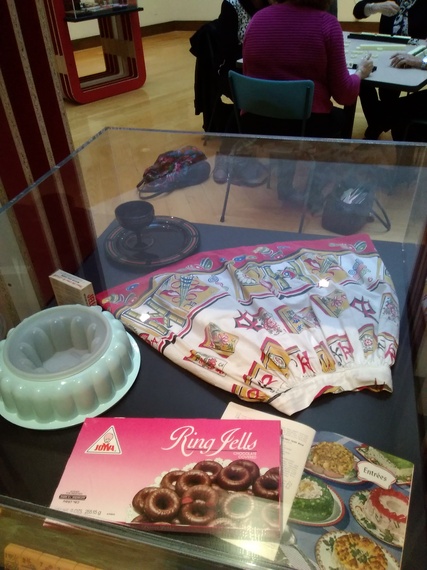 "Given the prominent role of food in Jewish culture, it's no surprise that when Jewish women get together for Mah Jongg, food is a kind of fifth player," Ivy Barsky told MyJewishLearning's The Nosher. "It's about nurturing, being social and being warm and welcoming to guests," said Barsky, who was the museum's deputy director when the exhibit first opened there before traveling across the country. Barsky is now CEO of the National Museum of American Jewish HIstory in Philadelphia.

Artful bites at Lox, the cafe at the Museum of Jewish Heritage

There are five mouth watering varieties of house cured lox at Lox, the museum's cafe, now helmed by chef David Teyf. The kosher menu, inspired by recipes from Teyf's family, from Minsk, is an abundance of tempting Jewish and Russian tastes, from dill and vodka-infused lox, to a pastrami version and a sake-ginger lox. The smoked sable was mouth watering, like "a Jewish sushi," one diner commented between bites.

Borscht with sour cream was a flavorful broth with bits of beets. The Country salad was a perfect pairing of radish, cucumbers, dill, hard-boiled egg and sour cream - a modern take on a nostalgic Eastern European immigrant standard fare lunch. The home made baked goods that fill the glass display case are incomparable - from poppy seed strudel to Teyf's walnut and cinnamon topped babka and his signature tray of Russian Coffee Cake. Open during museum hours.