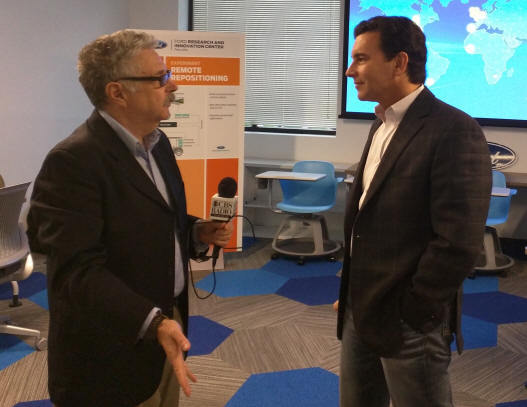 As you walk around the parking lot, garage and labs at Ford's newly opened Silicon Valley Research Center, you see plenty of cars and trucks along with all sorts of electronic gear. But there are also bicycles which, said Ford CEO Mark Fields, are among the many "mobility" technologies the company is looking at. "We're thinking of ourselves not only as just an auto company," he said in an interview, "but we're also thinking ourselves as a mobility company (scroll down to listen)," He said that Ford is "thinking broadly about a lot of these big societal issues such as congestion in large cities," and added, "we want to help be part of the solution." He said it's all about experiments ranging from bicycles and cars with sensors looking for open parking spaces

I didn't see a Ford logo on any of the bicycles but the company is equipping them with sensors to collect data about how people are getting from place to place. "It is a bit of opening the lens on our business, he said. "We're first and foremost a car and truck company," but he added "it's important for us to experiment and to think from a consumer standpoint," including "making customer's lives easier getting from point A to point B." He also said that expanding to other modes of mobility is "a good business opportunity."

The company is also experimenting with what Fields called a "car swapping" app. Ford employees, many of whom drive company cars, have access to an app that lets them swap cars with fellow employees. An example, said Fields might be "I'm looking for a Mustang for the weekend," in the hopes that a Mustang driving colleague might want to switch cars for a couple of days. So far, the app is only for employees, not the general public.

Ford is also experimenting with ride sharing services. "in other parts of the world we're testing small mini-buses. Folks are OK getting into a vehicle and sharing it but they want the appropriate amount of person space so we're looking at seating configurations," said Fields.

Calling itself a mobility company is a lot like a newspaper or radio station calling itself a media company or a railroad saying that's in in the transportation business, not the train business. Ford is known for making motorized vehicles that move people and things, but as the company looks forward, it's starting to think about all the possible ways to move humans and objects from place to place.

Fields said that Ford wants to be part of the "Silicon Valley eco-system" and to that end, the new lab, which Ford says is "one of the largest automotive manufacturer research labs in Silicon Valley," expects to employ 125 researchers, engineers and scientists by the end of the year. The lab is run by Dragos Maciuca, who came to Ford from Apple. Ford is also working with Google-owned Nest to deliver data from Nest home sensors (currently thermostats and smoke detectors) to the car. If smoke is detected at home, an alarm will go off in car with a notice on the car's infotainment system.

Like Google, Ford is also experimenting with autonomous vehicles along with partners from University of Michigan, M.I.T. and Stanford. The company is providing a Fusion Hybrid autonomous research car to Stanford's engineering program so that researchers can test planning and prediction algorithms.


In addition to bicycles, I also saw a golf cart at the facility. Actually what I saw was a Ford engineer sitting at what looked like an auto-simulator but he was remotely driving a golf cart located at Georgia Institute of Technology. This technology could come to market far sooner than autonomous cars, which are still years away, and could be used for specific applications such as off-road services or valet parking.

Ford is also working on improved voice recognition systems not only for infotainment and navigation but to assist in driving too.

I asked Fields whether I'll ever achieve my boyhood dream of having my own personal flying machine and all he could say was that "we're busy working on alternative fuels and autonomous vehicles but the Jetsons, I think, are still a cartoon."