A shy, brightly colored monkey species has been found living in the lush rainforests at the heart of the Democratic Republic of Congo, a find that utterly surprised the researchers who came upon it.

"When I first saw it, I immediately knew it was something new and different — I just didn't know how significant it was," said John Hart, a veteran Congo researcher who is scientific director for the Lukuru Wildlife Research Foundation, based in Kinshasa.

In fact, the find was something of a happy accident. Hart first spied the suspect monkey in 2007 while sifting through photographs brought back from a recently concluded field expedition to a remote region of central DRC.

Yet the image that caught his eye hadn't been taken in the field. It was snapped in a village, and showed a young girl named Georgette with a tiny monkey that had taken a shine to the 13-year-old. [See Georgette and the monkey.]

It was a gorgeous animal, Hart said, with a blond mane and upper chest, and a bright red patch on the lower back. "I'd never seen that on any animal in the area, so right away I said, 'Hmmm,'" he told OurAmazingPlanet.

Hart decided to get to the bottom of the mystery. Fast forward through five years of field work, genetic research and anatomical study, and today (Sept. 12) Hart and a list of collaborators formally introduced to the world a new primate species, dubbed Cercopithecus lomamiensis, and known locally as the lesula. Their work is announced in the online journal PLOS One.

It turned out that the little monkey that hung around Georgette's house had been brought to the area by the girl's uncle, who had found it on a hunting trip. It wasn't quite a pet, but it became known as Georgette's lesula. The young female primate passed its days running in the yard with the dogs, foraging around the village for food, and growing up into a monkey that belonged to a species nobody recognized.

Further investigation revealed the full story of the strange monkey. It turned out that C. lomamiensis, a cryptic, skittish primate, roams a swath of dense rainforest some 6,500 square miles (17,000 square kilometers).

"For a big mammal to go unnoticed is pretty unusual," said Kate Detwiler, a primatologist and assistant professor at Florida Atlantic University, and an author on the paper. Yet one visit to the area that the lesula calls home reveals why the monkeys escaped scientific notice for so long, Detwiler told OurAmazingPlanet. This region of the DRC is remote and vast.

The trees tower overhead, blocking out the sun, and the forest floor — the chief domain of the lesula — is steeped in a permanent gloom. The forest is full of sounds. At first light, the lesulas raise a lilting chorus of booming calls, distinct from the cries of their monkey neighbors who pass their lives in the trees high above the forest floor; at dusk, the cries of African grey parrots echo through the canopy. The earth is wet and soft, and feet sink into the ground with each step. There is a gentle, steady thud as fruit falls from the trees.

One gets the feeling of being on a ship very far out to sea, Detwiler said ?only here, the ocean is the endless expanse of the trees. "I felt so privileged to be there," she said. "I wish everybody could have that experience."

The lesulas live in this isolated region in groups up to five strong, and feeds on fruit and leafy plants. The males weigh up to 15 pounds (7 kilograms), about twice the size of the females. They also have some rather arresting anatomical features.

"They have giant blue backsides," Hart said. "Bright aquamarine buttocks and testicles. What a signal! That aquamarine blue is really a bright color in forest understory." [World's Freakiest Looking Animals]

"So in terms of monkey viewing, females can definitely find males," Detwiler said.

"We don't really know what this means because it's very uncommon for monkeys in this lineage," she added.

The only other monkey to share this feature is the lesula's closest cousin — the owl-faced monkey, a species that lives farther east. At first it was thought the monkeys were close kin, but genetic analysis suggests the two species split from a common ancestor about 2 million years ago.

Now that the new species has been formally identified, Hart said, the next task is to save it. Although the lesula is new to science, it is a well-established sight on the dinner table.

There's a thriving market for bush meat, particularly in urban areas, Hart said, and the monkeys are just one of dozens of species, from snakes to elephants to apes, that are targeted.

"People have disposable income, and this is the cheapest meat," he said. "Bush meat is a go-to item because it's less expensive than chicken or beef. This is not a new problem, but it's a problem that doesn't have a solution yet."

Hart and his wife, Terese, are partnering with local people to try to set up a national park in the lesulas' territory, but it's still a work in progress. In the meantime, researchers have set up camera traps in the dense forest to try to better understand the habits of the shy animals.

Georgette, the girl whose lesula companion started it all, is now 18. "The animal was very attached to her," Hart said. But one day the monkey disappeared.

"It was suspected that somebody in town had taken it in," Hart said. "And it ended up in their cooking pot." 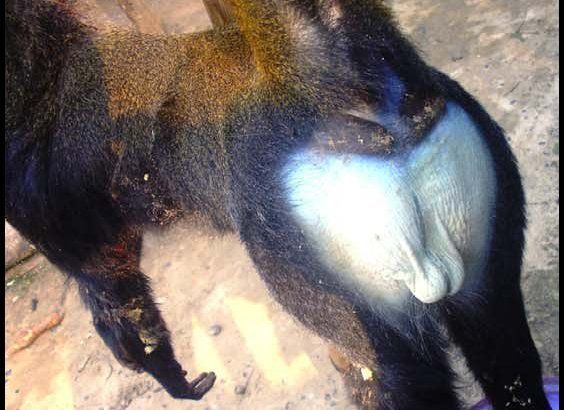