In a world of rampant climate destabilization and skyrocketing global carbon emissions--now about 70 percent above 1990 levels--national and global action to slash carbon emissions is long overdue.

Yet even though we already have found more fossil fuel than we can safely burn without roasting the planet, the global oil industry will spend about $570 billion this year exploring for even more oil and gas. Meanwhile, the fossil fuel industry receives global subsidies estimated by Oil Change International at $775 billion or more.

A world of 7 billion people that is currently overexploiting its energy, water, biodiversity, and soil can ill afford to misspend vast sums of investment capital and public funds on climate-destabilizing fuels.

Founded in 1989, Ceres has a Roadmap to Sustainability for companies and has recruited some 1,350 companies, including dozens of Fortune 500 firms, to sign its Climate Declaration calling for national action on climate change.

The group's current programs on water scarcity and transportation were showcased recently at Ceres's annual conference (May 12-14) at San Francisco's Fairmount Hotel. Corporate leaders and asset managers rubbed shoulders there with entrepreneurs, foundation executives, and a few environmentalists.

"Attacking climate change is a moral responsibility," McCarthy declared. "The move toward a low-carbon future is already happening. People now recognize it's inevitable."

They see climate change as a public health and safety challenge, she said, as well as an economic and national security problem. "We've never seen such investments in renewables and efficiency" as we're seeing today.

CARB chief Mary Nichols proudly noted that California is close to its goal of bringing its 2020 emissions back to 1990 levels without sacrificing economic growth. The state now has upped the ante and plans to reduce its greenhouse gas emissions by 40 percent by 2030. "California is the first state in North America to sign on to that target," Nichols said. 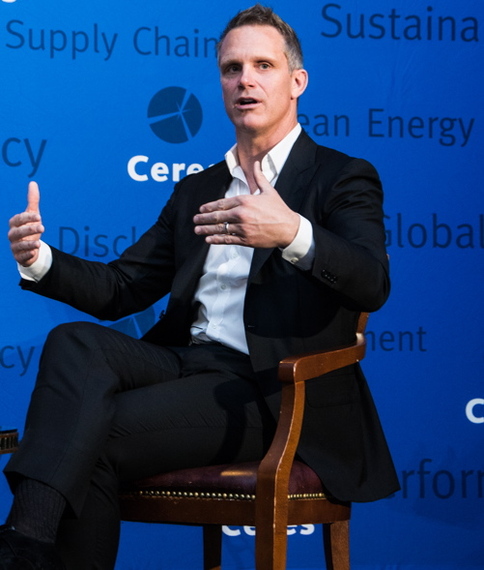 Steve McBee, President and CEO of NRG Home, told the conference that NRG, his parent company, is engaged in a "reset on strategy." The traditional centralized service-provider business model of independent power providers like NRG is being disrupted, he said.

Distributed generation, coupled with the proliferation of renewable energy and efficiency technologies, is the wave of the future. Recognizing these trends, NRG's goal is "to disrupt ourselves on our own terms."

NRG Home now seeks to "empower consumers to take control of their energy experience," Mcbee said. This will be "an unbelievable opportunity for value-creation." Moreover, most of the choices made by consumers will be for clean energy and efficiency, McBee asserted. 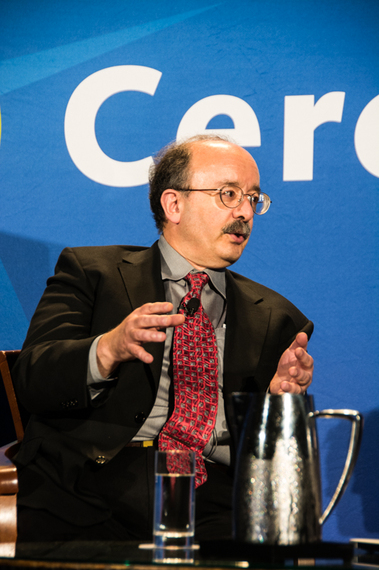 The final keynote was by Amory Lovins, chief scientist of the Rocky Mountain Institute, founded in Snowmass, Colorado. A brilliant, world renowned energy expert and preeminent apostle of energy efficiency, Lovins has articulated the case for "soft energy paths"--renewables and efficiency--for the past 40 years in 29 books and hundreds of articles.

Speaking on "The Beginning of the End of Oil," aka the coming demise of the oil industry, Lovins said that oil reserves that are unburnable "may be dwarfed in quantity by reserves that are unsalable." Using current technology, he said, we could triple the efficiency of trucks and planes. Auto efficiency could ultimately be four to eight times greater than it is today, he asserted.

With much of the transportation sector electrified and with many vehicles using light-weight carbon fiber bodies, overall fuel demand will plummet. People will also be driving less due to smarter urban design, bus rapid transit systems, and even autonomous cars. Car ownership will also decline, Lovins said, as new car-sharing technologies proliferate.

Remnant liquid fuel requirements for heavy trucks will be relatively low, he said, easily met by biofuels, hydrogen, and perhaps some natural gas. Two-thirds of the greatly reduced remnant biofuels could be made from various types of waste, he noted.

Energy industries today are being transformed faster than anyone could have imagined, Lovins said. He believes that profit-maximizing business will eventually end the Age of Oil even without supportive government policy, but that the transformation could be accelerated by sound policy.

Ceres, the conference convener, actively encourages its members to reap the economic benefits to be had by reducing their greenhouse gas emissions through greater energy efficiency and renewables.

Through Ceres's Investor Network for Climate Change, businesses with over $24 trillion in assets have called on governments to set a meaningful price on carbon and end fossil fuel subsidies. Ceres is also mobilizing support in the business community for a strong, binding international climate agreement later this year at the Paris global climate talks.

Ceres also engages in research and advocacy on issues such as the water impacts of hydraulic fracturing, heavy truck transportation energy use, and the prevention of deforestation by palm oil producers. Finally, the group develops sustainability performance standards, has a roadmap to sustainability, and it calls carbon asset risks and the long-term risks of water scarcity to the attention of investors, businesses, and communities.

If Ceres's example is any guide, the road to sustainability is paved with innovative policy, new technologies, creativity, and lots of hard work. For more about Ceres, see my companion Huffington Post column, "CERES: Mobilizing Business and Investors for Climate Protection."

John J. Berger, PhD. (www.johnjberger.com) is an energy and environmental policy specialist who has produced ten books on climate, energy, and natural resource topics. He is the author of Climate Peril: The Intelligent Reader's Guide to the Climate Crisis, and Climate Myths: The Campaign Against Climate Science.