Electric utilities tend to take a lot of heat for clouding public understanding of climate change and standing in the way of energy resources that won't cook the planet.

A number of utilities, for instance, have spent hundreds of millions over the past few years lobbying against the Clean Power Plan. Likewise, the Edison Electric Institute, the trade association representing the investor-owned utilities (IOUs) that serve nearly 70-percent of electric customers in the United States, has developed and is executing a multi-million dollar fight against rooftop solar.

It is, of course, unfair to lump all electric utilities together. A couple of recently published reports -- including one released Tuesday by Ceres -- reveal which investor-owned utilities are climate laggards and clean energy obstructionists, and which are working to transition to the clean, renewable energy future that the atmosphere demands. (Or at least are begrudgingly accepting said transition.)

The Ceres report looks at actual renewable energy deployment. In Benchmarking Utility Clean Energy Deployment: 2016, the report's authors analyze and rank investor-owned utilities -- which serve over two-thirds of American electric customers -- for how much clean energy and energy efficiency they deliver to customers.

This deep dive into deployment nicely complements the findings of an April report from the Sustainable Investments Institute (Si2) and the Investor Responsibility Research Center Institute (IRRCi), which scores the nation's largest utilities across a dozen metrics for clean energy governance and, for lack of a better term, climate acceptance. Or, basically, how well these 25 of the largest investor-owned utilities are adapting their businesses for a clean energy future.

So what do these reports tell us?

A handful of utilities are leading; most are still living in the 20th Century

Consider this from the Ceres Benchmarking report: just four of the 30 companies analyzed in the report account for more than half of the total sales of renewable energy. 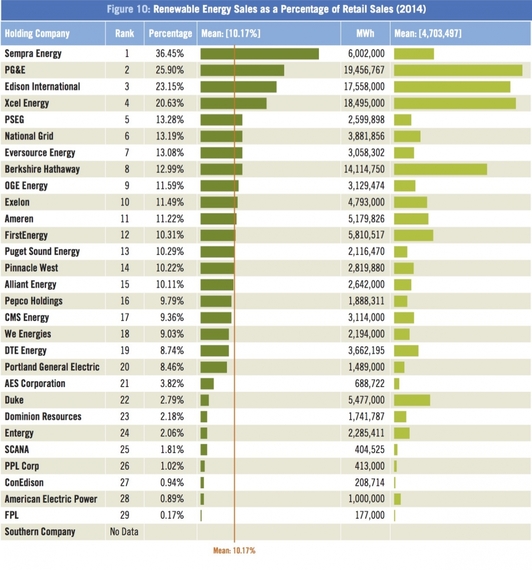 An unfortunate reality is that three of the five largest holding companies in terms of retail electric sales -- Duke, Southern Company, and American Electric Power -- all fall in this bottom tier of renewable energy deployment.

The range is clear in the IRRC Institute report as well. In, The Top 25 U.S. Electric Utilities: Climate Change, Corporate Governance and Politics, the authors rank the top investor-owned utilities holding companies across 12 metrics that show how seriously the companies' leaders are considering climate change in their planning, governance, and political activities. 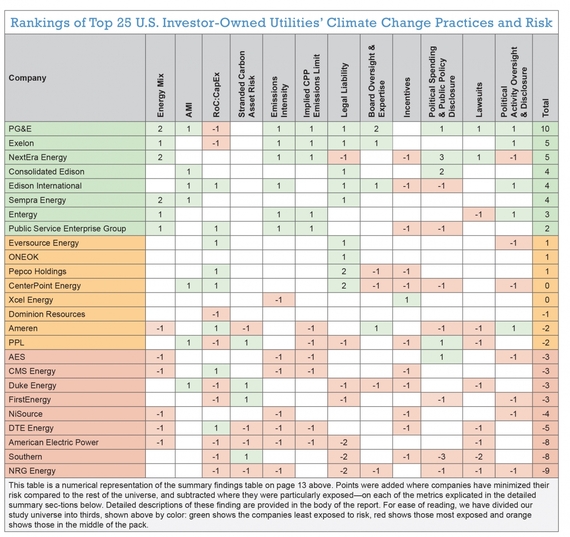 Clearly, there's a lot of variability, not only in the energy mix provided to customers (as Ceres has since laid out in depth) but in a range of other corporate practices as well.

Both reports show a pretty direct correlation between the utilities that are doing the most for renewable energy deployment and planning and the states with the most ambitious clean energy policy goals. States like California, Illinois, Massachusetts, Minnesota, New York, and Oregon -- all known for progressive climate and clean energy policies -- are host to utilities that score well on the Ceres benchmarks for renewable energy and energy efficiency deployment. Meanwhile, the lowest ranking utilities are almost always located in states with weak or non-existent policies, many of them in the Southeast.

Likewise, the companies that fare the worst in the corporate governance report do business in states with weaker policies. And that isn't always a coincidence, as the report reveals. The researchers track lobbying and direct spending in state and federal elections. The lowest-ranked companies tend to be the ones that spend the most on political activities. Which brings us to the next point.

Some utilities are digging in their heels in the 20th Century

Perhaps the most stunning revelation of the IRRC Institute report is how much some utilities are spending to maintain the fossil-fueled status quo.

"Some utilities are taking proactive approaches to ensure ample and dependable energy supplies that reduce regulatory and legal risk," said Jon Lukomnik, executive director of IRRCi. "But other utilities are digging in their heels while looking backwards to maintain business as usual. Rather than changing the energy mix or seeking innovation that can reduce capital costs, some utilities are deploying their resources toward court battles and political influence."

The companies that ranked lowest in the IRRCi report -- Southern, American Electric Power, and NRG Energy -- have spent the most on political and lobbying activities over the past five years.

Much of this spending was on federal issues, especially combatting the Clean Power Plan, utilities were also shown to spend heavily on state elections and lobbying state legislators in order to preserve state policies that promote centralized coal and natural gas-fired power plants.

Dan Bakal, director of electric power programs at Ceres and one of the report's authors, told DeSmog that one of the biggest revelations of their research was how relatively painless it is for utilities to comply with the Clean Power Plan. "Renewable energy and energy efficiency are both key components of the Clean Power Plan," said Bakal, going on to explain that many of the utilities they studied have already undergone the necessary transitions to comply with the regulations.

Large corporate energy users are driving huge demand for clean energy, compelling utilities to keep up, as "green tariffs" and other large renewable energy purchasing programs are catching on in some states. The Ceres authors cite a Rocky Mountain Institute analysis that showed corporate renewable energy deals of more than 3.4 gigawatts in 2015, a whopping 300-percent increase over the previous year. 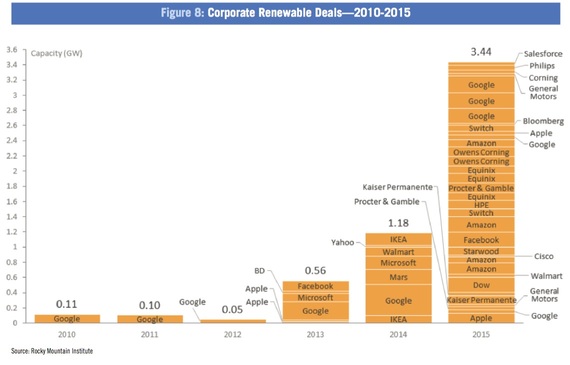 No matter how some resist it, clean energy is taking a serious hold on the grid, and at a staggering rate. Last year, U.S. solar and wind capacity grew by more than 28 percent and 11 percent respectively, bringing combined capacity for both over 100 gigawatts for the first time in history. Looking just at utility-scale resources -- and ignoring for a moment the staggering growth of distributed rooftop solar -- solar and wind represented more than 60-percent of all net capacity additions in 2015, and for many utilities, they represented all of the capacity growth.

The 30 companies Ceres examined together sold 136,000-gigawatt hours of renewable energy to their retail customers in 2014, a 13-percent increase from the previous year.

"This is not shocking, if you follow the industry-wide trends toward renewables," said Bakal. "But on the renewable side, we're seeing dramatic growth in absolute numbers and in percentages. The numbers really jumped off the page."