Like the blind men and the elephant, Consumer Electronics Show (CES) attendees view its overwhelming range of products through the lens of their own work and interests. For those in TV or video, there were new screens galore, from tiny to titanic. Athletes had a football field-sized floor of smart tech to model, motivate, monitor and measure movement. I got lost briefly in a Lilliputian air armada of drones, one of CES 2016's top drawing sectors.

Relatively few of the 175,000 delegates, though, have children in mind as they tour CES. Kids aren't permitted on the floor (fortunately, they made an exception for the wonderful Girl Scouts demonstrating Digital Cookie 2.0) and beyond the Kids & Family Tech Marketplace there's little analysis of the tech on display's implications for young people. (At CES 2015, I took a tour of "connected televisions" and the guide said, "no child will watch a big-screen TV from now on," then proceeded to show us dozens of smart sets built to stream services kids love.)

Living in Digital Times, organizers of the Kids @ Play Summit at CES, asked me to speak about current themes and trends Dubit sees among kids and teens, to help people frame their expo experience with insights into young people's lives with technology. Here, then, are my "Five Things We're Keeping an Eye On in 2016":

There's been fear that virtual reality is unsuited to developing children, but as that myth fades, Dubit researched young people's comfort, safety, engagement and interests around VR. Not surprisingly, they loved it (using terms like "epic" and "better than other games or consoles") and instantly generated ideas for what they'd like it to do. Perhaps surprisingly, educational applications led the way, along with immersive gaming.

VR isn't a gimmick, but its success depends on content creators thinking of it as a new medium, not just a video side dish. Dubit is considering several outstanding questions, such as what's "sticky," "deep" and "social" in virtual reality, whether gaming or experiences will dominate preferences, and what VR narrative looks like. From a financial perspective, will people buy one all-purpose device or several for different uses, what will people pay for VR content, and under what business models?

According to our tracking survey, Dubit Trends, access to tablets among US and UK kids 2-15 (distinct from personal ownership of one) tops 80% and is rising quarter on quarter.

What are the implications of this growing focus on all-in-one devices? Creators' content now competes directly with everything: young people are never more than a "home" button from games, video, learning, ebooks, communication, social media and more. In this overwhelming tsunami, content may still be "king," but discovery and sharing hold the keys to the kingdom.

The tablet's rise doesn't solve the problem that virtually all financial models (ads, subscriptions, freemium, etc.) are unsustainable or have ethical or practical challenges when it comes to children.

Perhaps more apps will be free, but monetized outside the mobile ecosystem (products, e.g.). "Content on demand" may supplant "video on demand" as publishers seek to keep kids engaged with their brands by offering diverse options. Would that help parents justify a paid subscription?

Of course, tablet tech presents opportunities, as well. A study by Dubit and the University of Sheffield, and another by Cork University Hospital, suggest that toddlers' capabilities with tablets start early, grow fast and in a predictable progression, and might even be useful in evaluating preschoolers' developmental stage.

CES was awash in artificial intelligence and technologies that listen and learn, including toys designed for learning or to be therapeutic. AI has been controversial in children's toys, with complaints about privacy and data-gathering surrounding "Hello Barbie" in particular. It will be fascinating to watch whether parents' feelings about AI are influenced by the device's intent.

Voice-activation (like Apple's Siri or Amazon's Echo) was also prominent at the show. These devices are ideal for young children, enabling them to find what they want before they're able to type or spell. AI apps can contribute to engagement and learning, aiding discovery (see above) with recommendations that get more accurate through ongoing use. 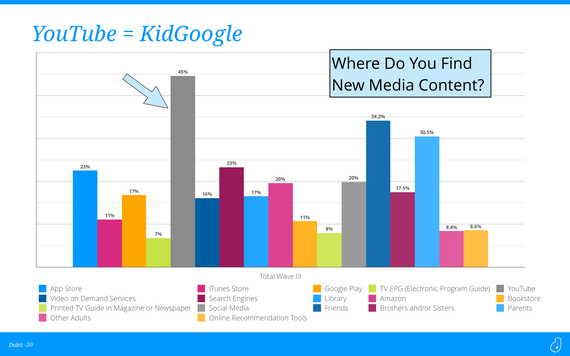 The above chart encompasses ages 2-15. From ages 2-4, kids' parents are their go-to source, but YouTube is next. By age 5, YouTube rises to the top, with parents and peers just behind. Teens are facile with search engines and the app store (and use them often), but YouTube still dominates. This should be eye-opening to content creators pondering distribution and marketing strategies.

With YouTube, we're also watching a real-time study of families' feeling about advertising. Activists have criticized YouTube Kids' advertising, but do parents suffer from "subscription fatigue"? Will they opt for a free, ad-supported service over another monthly bill? Will teens, as YouTube CEO Robert Kyncl suggested at CES, pay for YouTube Red to enjoy videos uninterrupted?

Is Horror/Sci Fi/Fantasy on the Rise?

This final point was a little tangential for a technology convention, but we've been intrigued to see sustained rise in kids' and teens' attraction to horror and sci fi/fantasy content. Perhaps it's driven by TV series like The Walking Dead, games like Five Nights at Freddy's, and anticipation of December's Star Wars: The Force Awakens release? We'll see if it keeps rising, or if some new content trend emerges.

Dubit's "Five Things..." presentation was prepared before I walked the display floors at CES; however, what I saw and heard there confirmed nearly every point. Of course, throughout the history of children's media, we've aspired to similar things: immersive and engaging devices; diverse, appropriate and high-quality content; tools to find things our kids will love, learn from and be inspired by; and ways for their media to expand, adapt and grow with them. Maybe now the technology is simply catching up with our hopes.

Here is a selection of slides from "Five Things We're Keeping an Eye On in 2016." 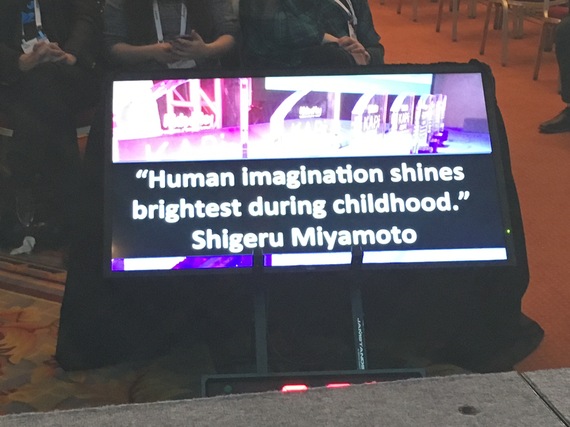